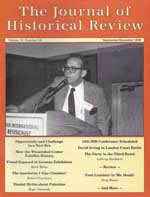 Between 1980 and 2002, The Journal of Historical Review was published by the Institute for Historical Review. It used to be the publishing flagship of the revisionist community, but it ceased to exist in 2002 for a number of reasons, mismanagement and lack of dedication being some of them. CODOH mirrors the old papers that were published in that journal.

A Polish court has decided not to punish a history professor for a “Holocaust denial” book that presents arguments questioning aspects of the familiar Six Million extermination story. On December 7, 1999, the regional court in Opole, in southern Poland, found that Dariusz Ratajczak supported revisionist views on the Holocaust …
This essay is reprinted from the December 1999 Phyllis Schlafly Report: P.O. Box 618, Alton, IL 62002. Web site: www.eagleforum.org The embarrassing truth is starting to come out that the Clinton Administration lied to us about Kosovo atrocities which were supposed to justify the bombing of Yugoslavia. In five months …
During his lifetime Lothrop Stoddard (1883-1950) was one of America’s most influential writers. He earned a doctorate from Harvard, and was the author of 15 books, including the much-discussed 1920 work, The Rising Tide of Color. He wrote numerous articles and essays, and was an editorial writer and foreign affairs …
Mr. Death: The Rise and Fall of Fred A. Leuchter, Jr. (1999) Genre: Documentary film. Length: 1 hr. 31 min. MPAA Rating: “PG-13” (www. mrdeath. net). Starring: Fred A. Leuchter, Jr., David Irving, James Roth, Shelley Shapiro, Suzanne Tabasky, Robert-Jan Van Pelt, Ernst Zündel. Director: Errol Morris (www.errolmorris.com). …
Numb with Shock Having just finished reading James Bacque's book, Crimes and Mercies, I am numb with shock. It is nearly impossible for me to believe what so-called fair and honest people of America and England carried out in postwar Germany. So much for my English heritage of fairness – …
With the dawning of a new century, Holocaust revisionism is making headlines everywhere. Around the globe there is real ferment, a new surge of media attention on Holocaust skepticism, and growing criticism of the oppressive impact of the powerful “Holocaust industry.” “Holocaust deniers” are, of course, still widely portrayed as …
Immediately following its publication in late 1995, Les mythes fondateurs de la politique israélienne (“The Founding Myths of Israeli Policy”), touched off a storm of controversy. Its octogenarian Communist-turned-Muslim author had taken aim at the historical legends cited for decades to justify Zionism and the Jewish state, including the most …
A highly publicized German exhibition of atrocities allegedly carried out by regular German army forces during the Second World War has been closed down in the wake of revelations that many of the harrowing photographs it displayed are deceitful. The organizers of “War of Annihilation: Crimes of the German Armed …
A doctored wartime photograph of the Auschwitz-Birkenau camp displayed by the Simon Wiesenthal Center on its “educational” web site is a good example of how the influential Holocaust organization falsifies history. The Center posts the photograph on its “Multimedia Learning Center Online” web site under the heading “Photo Gallery: Hungarian …
From around the United States and across the seas, scholars, activists and friends of the Institute for Historical Review will meet in Orange County, California, over Memorial Day weekend – Saturday afternoon, May 27, through Monday afternoon, May 29, 2000 – for the IHR's 13th Revisionist Conference. A lot has …
Robert Faurisson Robert Faurisson is Europe's foremost Holocaust revisionist scholar. Born in 1929, he was educated at the Paris Sorbonne, and served as a professor at the University of Lyon in France from 1974 until 1990. He was a specialist of text and document analysis. His writings on the Holocaust …
David Irving was in good form as he addressed a special IHR meeting in southern California on April 29, 1999. In addition to his scheduled lecture on "Winston Churchill and Charles de -Gaulle: The Murderous Friendship," the British historian also spoke about the international campaign to silence him, and on …
During the Second World War, Britain's main "dirty tricks" propaganda agency was the Political Warfare Executive (PWE), a unit of the British Foreign Office. This psychological warfare agency invented and distributed "black" propaganda disinformation to boost morale among anti-German British and Americans, and to promote anti-German sentiment in neutral countries. …
Peter Novick [author of the new book, The Holocaust in American Life] asserts that the Holocaust has desensitized us to other genocides, but stops short of asking who invented the Holocaust in the first place. Who decided to capitalize the noun "Holocaust" and transform genocide into a political weapon and …
Israeli, Syrian and United States negotiators have recently been meeting to work out an agreement by which Israel will return to Syria the Golan Heights, a portion of territory seized by Israeli forces in 1967. According to Israeli diplomatic sources and Israeli newspaper reports (early January 2000), the Jewish state’s …
On its own Internet web site, www.ihr.org, the Institute for Historical Review makes available an impressive selection of IHR material, including dozens of IHR Journal articles and reviews. It also includes a listing of every item that has ever appeared in this Journal, as well as the complete texts of …
Joseph Sobran is a nationally-syndicated columnist, lecturer, author, and editor of the monthly newsletter Sobran's ([... now defunct; ed.]). "Man of the Century?" is reprinted from the January 6, 2000, issue of the traditionalist Roman Catholic weekly The Wanderer (201 Ohio St., St. Paul, MN 55107). "Persecution Update" is reprinted …