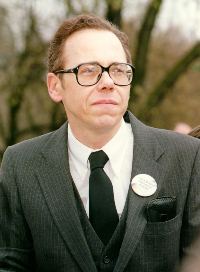 Until the late 1980’s, Fred A. Leuchter, Jr., was the foremost expert on the design, construction and maintenance of hardware, including homicidal gas chambers, used to execute convicted criminals in the United States. After receiving a Bachelor's degree (in history) from Boston University in 1964, Leuchter did postgraduate work at the Harvard Smithsonian Astrophysical Observatory. He holds patents on the design of sextants, surveying instruments and optical encoding equipment. He is an accomplished pianist and an NRA-qualified small-arms instructor. Leuchter is perhaps best known as the author of four controversial forensic reports on alleged German wartime extermination gas chambers.

Leuchter designed and maintained gas chambers for several U.S. penal institutions. He was sent by Ernst Zündel to investigate Auschwitz, Majdanek, Dachau, Hartheim and other alleged "Nazi Death Camps" and "gassing facilities." Author of the devastating, trail-blazing series of Leuchter Reports (I, II, III, IV) and several articles and videotaped presentations that resulted from these investigations. Sensational Zündel witness in the Great Holocaust Trial in 1988.

Leuchter was blacklisted in the U.S. and hounded by the Holocaust lobby and the world's lapdog media. He was arrested and jailed in Germany while visiting there to appear on a television show, and he was denied entry to the UK due to his forensic research.

As a result of intense Jewish pressure, Leuchter lost his livelihood. Since making known his findings, he also has been libelled, slandered, and financially ruined.

Jim Rizoli goes over the famous Leuchter Report on the impossibilities of there being homicidal gas chambers in the camps during the so called Holocaust.

An interview with Fred Leuchter about gas chambers.

The infamous video "Mr. Death" - Fred Leuchter. This is a brilliant video with Fred Leuchter talking to Goyim TV

Fred Leuchter, former consulting engineer on capital punishment in the USA, compares American with so-called Nazi gas chambers. Since both used the exact same gas, comparing them is logical.

Fred Leuchter, is an actual person who can claim he has "gassed" individuals. In 1988, Fred investigated Auschwitz, Auschwitz-Birkenau and Madjanek camps where Jews were supposed to have subjected to mass gassing using Zyclon B (Cyclone B). His report based on his technical expertise found that there were no "gas chambers" at the afore-mentioned places, there were never any "gas chambers" or that there could have not been any at those places. One would thought that this report by Leuchter (The Leuchter Report) would have been enough to satisfy any rational individual as to the falsity of not only "gas chambers" at the afore-mentioned, but also the Holocau$t was up to severe examination as to its veracity. However, what happened was that Fred was subjected to a vicious attack, not only on his person, but his professional qualifications, and his employment. Despite this vicious attack by obvious liars, Fred has always stood by his report. No counter expert has ever been found by the Holocau$t liars, and Fred's report not only remained unanswered but completely unrebutted. Fred went on to write three more reports regarding

This year, 2018, marks the 30th anniversary of the Leuchter Report, the expert report compiled by Fred A. Leuchter on the rooms at the Auschwitz, Birkenau and Majdanek Camps commonly referred to as “gas chambers.” In this contribution, I will not deal with the merits of Leuchter’s Report, on which rivers of ink have been poured out. In this regard, I limit myself to pointing all interested parties to the critical edition of Leuchter’s reports edited by Germar Rudolf. What I propose, instead, is to examine Leuchter’s professional qualifications, about which many falsehoods have been promoted in an attempt to denigrate and discredit the aforementioned Report.

Fred Leuchter at the 9th Institute for Historical Review conference 1989.

In this livestream Germar Rudolf talks to Brian Ruhe about the great Professor Robert Faurison.