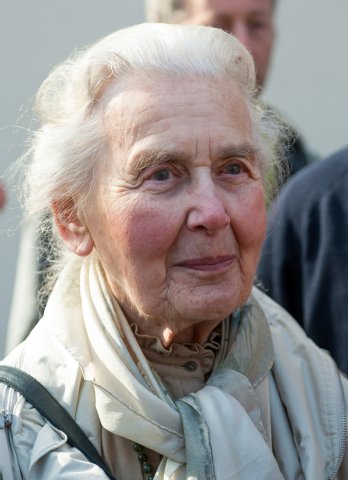 Hamburg District Court, Nov. 11, 2015 — 87-year-old Ursula Haverbeck has been sentenced to imprisonment in Germany for doubting that people were “exterminated” by “gassing” in the Nazi concentration camp in Auschwitz. (See our article: "Ursula Haverbeck Challenges German Authorities")

The defendant, in good spirits, reiterated her doubts in the courtroom. She arrived without a lawyer, and defended herself. Some fifty of her supporters crowded the courtroom and the hall outside.

She was accused of giving an interview to the German magazine Panorama in which she stated that Auschwitz was not an extermination camp but a labor camp. The mass murder of Jews had not taken place, she said.

Turning to the prosecutor she asked, "How do you as a lawyer prove the accusation that Auschwitz was an extermination camp?" Her request for a revisionist historian to give evidence that at Auschwitz no one had been gassed, was rejected by Judge Jönsson who stated: "It is futile to argue with people who do not accept the facts."

The German government prosecutor maintained that the defendant’s "fanatical delusion" had not abated and that, despite her advanced age, Ursula Haverbeck must be sentenced to 10 months in prison without parole. The judge agreed, and the sentence was imposed. (See this article by the German newspaper Hamburger Morgenpost, Nov. 12, 2015; and some footage by the German left-wing government TV news program Panorama of Mrs. Haverbeck before and after the trial. This case made front-page news in Germany's largest tabloid Bild Zeitung on Nov. 13, 2015)

In 2009, Haverbeck was fined thousands of dollars in the District Court of Bad Oeynhausen, for having given offense to Charlotte Knobloch, president of the Central Council of Jews.