Thomas Dalton’s article in this issue, “The Jewish Hand in the World Wars,” details successes of small groups of influential Jews in gaining control of the governmental apparatus in many countries, including notional democracies such as the United States.

The process seems for the first time to have become visible in the record by the end of 1911, when Congress passed a bill with but one single dissenting vote to abrogate a treaty of 79 years’ standing with Russia because Russia insisted on barring from entering their country, a running total of four American Jews seeking to enter. At the time, the Czarist regime in Russia perceived much trouble coming from its Jewish minorities, who seemed especially susceptible to agitation by foreign co-religionists such as the four persons refused entry. The treaty did not seem, according to Dalton, to explicitly require admission of every citizen of one of the countries to the other country, and he does not mention whether the US ever barred admission to a traveler from Russia.

Nonetheless, a cabal seemingly composed of few besides Lawyer Louis Marshall and Banker Jacob Schiff and their recruits Samuel Strauss and Adolph Ochs of the New York Times, along with fellow-travelers such as William Randolph Hearst and the up-and-coming Democrat Woodrow Wilson succeeded not only in getting the treaty with Russia abrogated, but in steamrollering the opposition of the US ambassador to Russia, the US secretary of state, and President Taft himself. Not bad for a group then comprising but two percent of the US population. 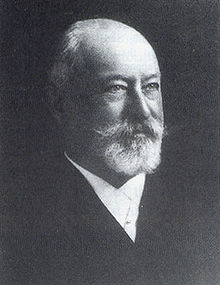 American Jewish banker Jacob H. Schiff (1847-1920). Schiff helped finance the Russo-Japanese War through a large loan to the Empire of Japan. This was one of several activities to battle the Czarist regime. [Public domain], via Wikimedia Commons

Today, matters are different, and it seems that principles, too, must bend to the Jewish-sponsored will in America, where the Jewish percentage of the population remains at but 2.2 percent. One thing that has changed is that Jewry today “has” a country of its own, with a dissident “minority” that happens to constitute a majority in the aggregate area controlled by that country, Israel. Despite Israel’s possession of nuclear weapons and a formidable array of state-of-the-art military equipment and supplies backed up by the repeated guarantee of unlimited support from the world’s only superpower (the same United States that in 1911 abrogated its treaty with Russia at its Jews’ behest), Israel finds its dissident majority so troublesome that it insists (as many countries do) on barring from entry anyone who might advocate any sort of concessions to this majority as well as anyone with a name (Arabic) that sounds as though its bearer might be predisposed to such sentiments.

Well and good—no doubt the United States also claims the right to screen admittees from many countries. But the United States has negotiated with some 28 other countries the admitting of any and all (properly documented) comers from those countries without visas, in return for the same favor being guaranteed to all Americans seeking to travel to any of those countries. The arrangement is, as is practically universal in such international concessions, totally reciprocal—we do as they do, and vice-versa.

Now, according to the Guardian newspaper in the United Kingdom, Israel wants this convenience for any and all of its traveling citizens, very few of whom are known ever to have incited any sort of trouble in the United States.

But Israel, America’s special ally in the Middle East, doesn’t want the same deal the 28 countries so far have gotten—it wants, and is promoting to Congress with another special bill—to enjoy this privilege for its citizens without extending the same benefit to American citizens. It demands, through the good offices of Senators Barbara Boxer, Roy Blunt, and sixteen more co-sponsors of the bill, the continued right to reject would-be American visitors at its sole and unquestioned discretion. Something, it might churlishly be noted, for … nothing.

Actually, there’s nothing new about this at least since 1911, except perhaps for the sovereign State of Israel, which at 65, isn’t even as old as the treaty with Russia the US abrogated in that year.

How little else has changed in the last century. Look for Congress to enact this abrogation of America’s obligations to itself in favor of a few influential American and foreign Jews.

But this time, no Congressman will dare dissent. None at all.