For Email Newsletters you can trust
Contribute
or find other ways to contribute »
Popular items
About the Author
Nigel Parry
No description available.
Why not help out and contribute one?
Featured documents
Search the Library
Advanced Search 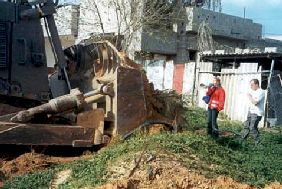 Picture taken between 3:00-4:00PM, 16 March 2003, Rafah, Occupied Gaza. Rachel Corrie (L) and Nick (R) oppose the potential destruction of this home (to the west of the Doctor's home where Rachel was killed). In the instance pictured, the bulldozer did not stop and Rachel was pinned between the scooped earth and the fence behind her. On this occasion, the driver stopped before seriously injuring her. Photo by Joseph Smith (ISM Handout). 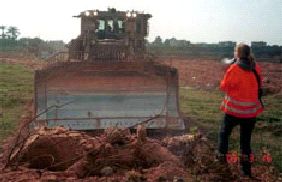 Picture taken between 3:00-4:00PM on 16 March 2003, Rafah, Occupied Gaza. A clearly marked Rachel Corrie, holding a megaphone, confronts the driver of one of two Israeli bulldozers in the area that were attempting to demolish a Palestinian home. She was confronting the bulldozer in order to disrupt its work, and prevent it from threatening any homes. Photo by Joseph Smith. (ISM Handout)

Picture taken at 4:45PM. Other peace activists tend to Rachel after she was fatally injured by the driver of the Israeli bulldozer (in background). This photo was taken seconds after the bulldozer driver dragged his blade over her for the second time while reversing back over her body. He lifted the blade as seen in the photo only after he had dragged it back over Rachel's body. This image clearly shows that had he lifted his blade at any time he may have avoided killing her, as the bottom section of the bulldozer is raised off the ground. Photo by Richard Purssell. (ISM Handout) 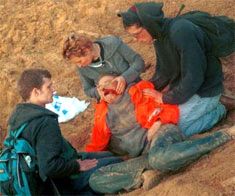 Picture taken at 4:47PM on March 16, 2003, Rafah, Occupied Gaza. Rachel Corrie lies on the ground fatally injured by the Israeli bulldozer driver. Rachel's fellow activists have dug her a little out of the sand and are trying to keep her neck straight due to spinal injury. Photo by Joseph Smith. (ISM Handout 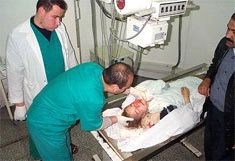 Rachel in Najjar hostpital, Rafah, Occupied Gaza. Rachel arrived in the emergency room at 5:05PM and doctors scrambled to save her. By 5:20PM, she was gone. "Ha'aretz" reported that Dr. Ali Musa, a doctor at Al-Najjar, stated that the cause of death was "skull and chest fractures". Photo by Mohammad Al-Moghair

On March 16, 2003, in Rafah, occupied Gaza, 23-year-old American peace activist Rachel Corrie from Olympia, Washington, was murdered by an Israeli bulldozer driver. Rachel was in Gaza opposing the bulldozing of a Palestinian home as a volunteer with the International Solidarity Movement, which describes itself as follows:[1]

As enshrined in international law and UN resolutions, we recognize the Palestinian right to resist Israeli violence and occupation via legitimate armed struggle. However, we believe that nonviolence can be a powerful weapon in fighting oppression and we are committed to the principles of nonviolent resistance."

Rachel and seven other ISM activists were in the Hi Es Salam area of Rafah, Gaza, trying to prevent the razing of Palestinian land and property. Present were two Israeli occupation army bulldozers and a tank. For a period of two hours, the activists played 'cat and mouse,' attempting to prevent the illegal demolitions by physically blocking the passage of the two bulldozers.

An e-mailed report from the Palestine Monitor stated:[2]

"Rachel Corey [sic], 23 years old from the state of Washington, was killed while she was trying to prevent Israeli army bulldozers from destroying a Palestinian home. Other foreigners who were with her said the driver of the bulldozer was aware that Rachel was there, and continued to destroy the house. Initially he dropped sand and other heavy debris on her, then the bulldozer pushed her to the ground where it proceeded to drive over her, fracturing both of her arms, legs and skull. She was transferred to hospital, where she later died. Another foreigner was also injured in the attack and has been hospitalized - at this stage his nationality is unknown."

"Rachel had been staying in Palestinian homes threatened with illegal demolition, and today Rachel was standing with other non-violent international activists in front of a home scheduled for illegal demolition. According to witnesses, Rachel was run over twice by the Israeli military bulldozer in its process of demolishing the Palestinian home. Witnesses say that Rachel was clearly visible to the bulldozer driver, and was doing nothing to provoke an attack."

The photos clearly show that Rachel was well marked, had a megaphone which removes any doubt that the activists' presence was somehow invisible to the driver, and she clearly posed no threat to the bulldozer driver.

"The confrontation between the ISM and the Israeli Army had been under way for two hours when Rachel was run over. Rachel and the other activists had clearly identified themselves as unarmed international peace activists throughout the confrontation.

The Israeli Army are attempting to dishonour her memory by claiming that Rachel was killed accidentally when she ran in front of the bulldozer. Eye-witnesses to the murder insist that this is totally untrue. Rachel was sitting in the path of the bulldozer as it advanced towards her. When the bulldozer refused to stop or turn aside she climbed up onto the mound of dirt and rubble being gathered in front of it wearing a fluorescent jacket to look directly at the driver who kept on advancing. The bulldozer continued to advance so that she was pulled under the pile of dirt and rubble. After she had disappeared from view the driver kept advancing until the bulldozer was completely on top of her. The driver did not lift the bulldozer blade and so she was crushed beneath it. Then the driver backed off and the seven other ISM activists taking part in the action rushed to dig out her body. An ambulance rushed her to A-Najar hospital where she died."

The Most Recent Victims

Israeli Soldiers Shot Tom Hurndall, 22, a British ISM Activist while he was protecting children in Rafah from Israeli gunfire on April 10, 2003. Tom was hit in the head by sniper fire. His condition is listed as critical.[3]

Brian Avery, 23, US ISM activist shot in the face by Israeli Forces in Jenin on April 5, 2003. He has suffered sever damage to his face and will have to undergo extensive reconstructive surgery. Brian returned home from the hospital in Haifa on June 16, 2003.[4]

"This is a regrettable accident," Israeli Defence [sic] Forces spokesman Captain Jacob Dallal was reported as saying in Ha'aretz newspaper. "We are dealing with a group of protesters who were acting very irresponsibly, putting everyone in danger."

Members of the Israeli army and associated Israeli settler paramilitary units have been responsible for the killing of 2,181 Palestinians and the injuring of another 22,218 between September 29, 2000, and March 14, 2003.

In addition to the killing of Rachel Corrie by the bulldozer driver, Israeli troops have shot and killed several other internationals in different incidents during the Intifada: German doctor Harald Fischer, Italian cameraman Rafaeli Ciriello, and British United Nations worker Iain Hook.[5]