For Email Newsletters you can trust
Contribute
or find other ways to contribute »
Popular items
About the Author
Martin A. Larson
Dr. Martin A. Larson was born in Whitehall, Michigan, in 1897. Following service in the US Navy, he attended and graduated from Kalamazoo College, where he distinguished himself in track, forensics and scholarship. With a state fellowship, he went on to study at the University of Michigan, which awarded him a Ph.D. in English literature in 1927 for his research into the sources of Milton's theology. For a ...
Read more »
Featured documents
Search the Library
Advanced Search

Thomas Jefferson's Place in History
By Martin A. Larson
Published: 1993-01-01
Report a problem

Martin A. Larson received his Ph.D. in English literature from the University of Michigan. He is the author of more than 20 books, including the 414-page work, Jefferson: Magnificent Populist (available from the IHR). Since 1980 Larson has been a member of the Journal's Editorial Advisory Committee, and has spoken at several IHR conferences. He makes his home in Arizona with his wife.

In a recent Washington Post article, "Thomas Jefferson, Tarnished Icon?" (Oct. 17, 1992), staff writer Joel Achenbach subtly and snidely sought to dethrone Thomas Jefferson from the pinnacle on which he is so rightly enshrined.

"Among professional historians, Jefferson's stock has sunk in the last generation, and it has a lot to do with race and slavery," said historian Peter Onuf at a recent conference at the University of Virginia. In the harsh view of Paul Finkelman, another historian who is quoted here with apparent approval, Jefferson was a "pathetic" racist, and "a profligate, undisciplined sper" who "could not live without slaves. Too self-indulgent to manage carefully his own lands and his life, he relied upon slaves, as a source of ready capital, selling scores of them to support his habits and pleasures." In Finkelman's opinion, Jefferson was "the arch traitor" against "the hopes of the world." 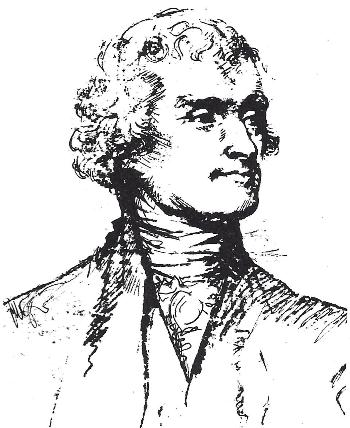 Jefferson authored the Declaration of Indepence, and then served as US minister to France, governor of Virginia, secretary of state, vice president, and president of the United States. During his decades of public service, he received no compensation above actual expenses. His duties required him to be away from his home so much that he fell into debt, and was able to save his home only with the generous help of fris. When he retired from the presidency in 1809, the legislature of Virginia, his native state, paid tribute to him in a resolution that declared:

We have to thank you for the model of an administration conducted on the purest principles of republicanism; for… patronage discarded; internal taxes abolished; a host of superfluous officers disbanded;… more than thirty-three millions of debt discharged;… and, without the guilt or calamities of conquest, [for] a vast and fertile region added to our country… These are points in your administration which the historian will not fail to seize, to expand, and teach posterity to dwell upon with delight.

It would take a small book merely to list and describe the blessings he conferred upon America and its people. For example, as president he abolished the internal revenue tax system established by Alexander Hamilton, reduced taxes by fifty percent, and paid off nearly half of the national debt in eight years. Contrast this with what has been and still is being done in Washington!

Jefferson's interests were always for the welfare of the country and its citizens. Even today, though, there are dishonest individuals and various special interests who hate anyone who shares his ideals. Jefferson once said that he was assailed by so many enemies that if he were to answer them all, he would not have time for anything else. Instead, he declared, he would let judgment of him and his record be made by the people–who responded by electing him to a second term in a landslide. Later generations have similarly shown their appreciation by erecting in his honor one of the most magnificent memorials to be found in our capital.

Concerning the thorny issue of slavery, Jefferson wrote: "Nothing is more certainly written in the book of fate than that these [black] people are to be free; nor is it less certain that the two races, equally free, cannot live under the same government." He did not mean that the two races could not somehow co-exist, but rather that they could not live together in peace and harmony.

History has born out the truth of his observation. Since the abolition of slavery, the two races have co-existed in an uneasy state of mutual suspicion and animosity, in spite of the enormous efforts and vast sums spent by white America on behalf of blacks. Black urban areas have degenerated into crime-ridden slums, periodically torn apart by riots. Jefferson proposed that all young blacks, with their children, should be transported from the United States and set up in comfort in a faraway land, probably in Africa. If his proposal had been implemented, this country would have been spared the terrible Civil War, and perhaps other calamities.

Jefferson regarded slavery as an unparalleled iniquity. For this he strongly criticized Britain's rulers, who fostered the slave trade in large part to discourage emigration to America of their own starving unemployed.

Washington Post writer Achenbach could not deny himself the pleasure of bringing up the tired old accusation that Jefferson took a black slave, Sally Hemings, as a mistress. In fact, there is not the slightest shred of evidence of such a liaison, or that Jefferson was the father of any of her children.

Commenting on lies and calumnies about him that were being published in newspapers at the time, he wrote in 1807: "As for myself, conscious that there was not a truth on earth which I feared, should it be known, I have lent myself willingly as a subject of a great experiment, which was to prove" that the calumnies of a licentious press could not batter down one who had led a blameless life and had nothing to hide.