CODOH's most ambitious campus campaign to date has begun to impact across America, on campus and off. Once again, students across the nation are reading about the holes in the Holocaust story. For the first time, many of them are discovering the identity of the chief player in the powerful lobby that has decreed that rational inquiry into the Holocaust story is taboo in American public life.

The quarter million dollar reward offer that focuses squarely on the bullying and evasiveness of the Anti-Defamation League—in America the chief obstruction to free inquiry as to the facts of the Jewish Holocaust story—has to date run in nine university newspapers. Several of those colleges are now embroiled in controversy between censorious professors and student editors—and the undergraduate journalists are sticking to their guns.

The reward ad, which raises concrete questions regarding the presumed facts of the Holocaust story and the advisability of open debate, has been accepted for publication by another fifteen campus publications. The ad is also running, or being reported on, in regular city newspapers large and small.

It has further attracted praise and thoughtful comment from such knowledgeable revisionists as David Irving and Ingrid Rimland, the award-winning novelist who writes the daily revisionist Z(uendel) gram for the Internet.

As in the past, the campus controversy isn't stopping, it's only starting, with publication of our ad. CODOH's reward offer for televised debate of the Holocaust story has prompted angry attacks, but also spirited defenses of open discussion. Despite the clear language of the ad, which calls for debate, not denial, of the gas chambers, the "eyewitness" accounts, and other Holocaust standbys, there have been the usual denunciations of CODOH and Bradley Smith for "denying the Holocaust.”

More positive, and more important, have been the fortitude and resolution in defense of a free press exhibited by several of the student editors who chose to run our ad. The first university paper to publish the reward ad this month, appropriately enough, was the Georgia State Signal. The Signal (circulation 7,000) has now published CODOH ads for three years running.

Despite a campus tempest of whining, denunciation, and threats, Signal editor Jennifer Smith hung tough. In a brief, lucid, and unapologetic essay, the philosophy and journalism major put the case for freedom of the press and for open debate as well as it's been put on an American campus, or off, in a long time. As she told the Atlanta Journal-Constitution (September 15): "It is a noble thing not to offend anyone, but the implication of picking and choosing what you are going to run based on what you like and identify with scares me very much."

Her words should have caused some consternation at the Atlanta Journal-Constitution: It first accepted, then rejected running the ad. (That cancellation spared Emory University Professor Deborah Lipstadt, chief academic advocate of non-debate of the Holocaust, a little embarrassment in her Atlanta backyard—though it won't help her in the libel suit David Irving has brought against her in London [see Worldscope]). Instead, reporter Ernie Suggs quoted a roster of locals kvetching about the appearance of the ad in the Signal. "We believe and understand this is not an issue of free speech," said Heidi Berger, Metro Campus program director of the Atlanta Jewish Young Adult Division. "This is just a bunch of scurrilous charges that are creating bad feelings among the student body," chimed in law professor and faculty advisor Mark Budnitz. Neither these nor any other of the savants quoted was willing, or able, to come to grips with specific questions raised in the ad.

In the upper Middle West, the University of Wisconsin-Oshkosh Advance-Titan (with a circulation of 8,500) ran CODOH's $250K reward ad on September 16. Publication of the ad resulted in the printing of ten (ten!) letters from aggrieved members of the faculty in the September 23 issue of the paper and the scheduling of a campus forum set for October 5 to confront the issues raised by the ad.

Judging from experience, this "forum" will aim chiefly to pander to the feelings of students and faculty offended by the ad than grapple with the specific questions the ad asks. As at Georgia State, student journalists have stood their ground: Editor-in-Chief Stefanie Scott reminded her readers that although the ad's text did not represent editorial policy, "...it is stated in the form of a question, leaving readers to ponder the issue and to make up their own minds." Sales manager Laura Denissen, who sold us the ad, questioned whether the ad’s opponents purpose was to stop advanced thinking and questioning, and concluded: "I surely hope not, because if so, then I missed that when I came to this university and started paying tuition."

CODOH's latest campus campaign has, in the words of the song, "only just begun.” The ten papers across America that have already run the ad have a combined circulation of going on a hundred thousand. Some twenty more campuses have agreed to publish; and we're ready to place many more.

We've been heartened by the determination of student editors at Georgia State, the University of Wisconsin-Oshkosh, and Cal. St.-Fullerton to run our reward ad, and then, unlike so many undergraduate journalists in the past, to breathe defiance in defense of open inquiry rather than mumble apologies about hurt feelings. One can't help but contrast the literal-minded allegiance to the ideals of Jefferson and Madison shown by these state university students with the sophisticated evasiveness and circumlocution that some of their editorial counterparts in the Ivy League have evinced in the name of "sensitivity," "responsibility," and other words for dodging open debate.

And, for the first time, CODOH is working actively to put university editors who have ran its ad in touch with one another (see Notebook).

This story wouldn't be complete without reporting what hasn't yet made the headlines. First, there are those many students who, made curious by the reward ad or by the campus uproar over it, have headed and are heading via their on-line computers to CODOHWeb—there to read the reward offer terms and to sample some of the huge collection of revisionist articles that destroys, within minutes, the lie that revisionists are ignorant or merely bigoted.

Then there is the Anti-Defamation League itself. Like Count Dracula when the mirrors come out, the ADL is never more uncomfortable on the stage than when someone else is shining the limelight on them. The watchdog group whose own Website boasts long lists of triumphant press releases on this or that careless celebrity or group accused, chastised, brought to their knees in humble apology—from Brace Willis and Superman to the Swiss bankers and Ted Turner—is shrinking from the spotlight, now that they're the target. 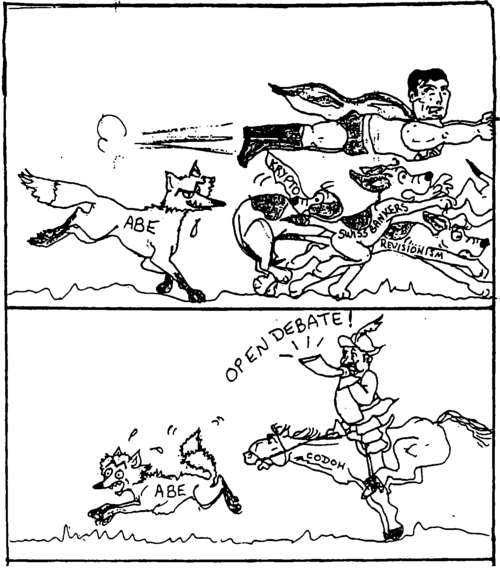 Could be, of course, that they're a little skittish at the suit currently aimed at them in San Francisco, where they are refusing to turn over material their spy Roy Bullock gathered on ADL targets in cahoots with police in San Francisco and elsewhere (some of which ADL admits to having turned over to Israel intelligence, some of which Bullock admits to having sold to South Africa's apartheid leaders, pre-Mandela).

Only a few months after ADL was gloating over its successes in preventing publication of some of our earlier Campus Project advertisements (see SR 56, July 1998), the organization appears to be lying low. A big money reward offer; concrete questions on their Holocaust story as history and as subject for debate; the chalenge to demonstrate that it’s not true, that they are in the business of censoring revisionism: It all adds up to an ad that ADL can not easily permit to run all over the country, but that it can't be seen to be censoring. Fighting "anti-ADLism" doesn't play very well compared to battling "anti-Semitism." This fall's campaign is just gathering steam; more-much more-next issue!

[Your help is key to keeping the Campus Project reward ad campaign rolling. In return for your contribution to the Campus Project, we'll send you a packet of the first news stories, letters and comment by students, professors, journalists, and other parties engaged in supporting or suppressing open debate of the Jewish Holocaust story in America's academies.]