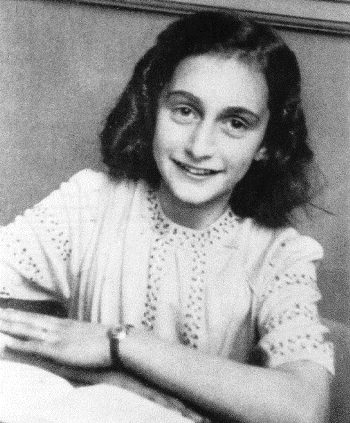 Known around the world for her famous diary, Anne Frank is perhaps the most commemorated “victim of the Holocaust.” On the fiftieth anniversary of her death, and of the liberation of the Bergen-Belsen camp where she died, she has been the subject of renewed attention.

Translated into dozens of languages, more than 22 million copies of her diary are estimated to have been sold worldwide – millions of them to secondary schools. In terms of its public impact, says “Nazi hunter” Simon Wiesenthal, the Anne Frank diary is “more important than the Nuremberg trials.” (The Washington Post, April 1, 1979, p. H3) 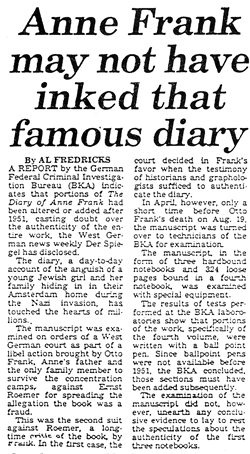 Over the years considerable doubt has been cast on the authenticity of the diary of Bergen-Belsen's best-known victim. For example, this article appeared in the mass-circulation daily New York Post, Oct. 9, 1980. Probably the most detailed critique is by French professor Dr. Robert Faurisson, whose essay, "Is the Diary of Anne Frank Genuine?," was published in the Summer 1982 Journal of Historical Review.

Influential organizations and much of the western media promote a quasi-religious Anne Frank cult. She has become a kind of secular saint. As the British monthly History Today noted in its March 1985 issue:

The impact of the Diary has been immense, especially on younger generations, school children, adolescents and students. In Germany, a type of Anne Frank cult developed in the fifties similar to movements started by St. Teresa and St. Bernadette. In 1957, mass emotion was channelled into a pilgrimage of two thousand young people, mainly from Hamburg, to Bergen-Belsen where, in pouring rain during the course of a ceremony, flowers were placed on the mass graves – in one of which Anne Frank was buried.

Anne Frank’s fate is not unlike that of many other lesser-known victims of the wartime anti-Jewish policies imposed in Axis-ruled Europe. On August 4, 1944, police raided the “annex” in Amsterdam, Netherlands, where the Frank family had been living for two years. They were taken to the Dutch transfer camp of Westerbork.

As part of the German program to evacuate Jews from western Europe, the 15-year-old girl and other members of her family were deported by train from the Netherlands to the Auschwitz-Birkenau camp in what is now southern Poland.

Several weeks later, in the face of the advancing Soviet army, Anne – along with thousands of other Jewish prisoners – was evacuated by rail from Auschwitz more than four hundred miles westward to the Bergen-Belsen camp in northwestern Germany.

Along with many other Belsen camp inmates, Anne came down with typhus, from which she died in mid-March 1945. She was not killed or murdered. Anne Frank perished – like millions of others, both Jewish and non-Jewish, in Europe during that terrible time – an indirect victim of history’s most devastating war.

Few people realize that Anne, along with father and sister, and thousands of other Jews, “survived” Auschwitz-Birkenau. Her father, Otto Frank, came down with typhus and was transferred to the camp infirmary there to recover. He was one of thousands of sick and feeble Jews who were left behind when the Germans abandoned the camp in January 1945, shortly before it was overrun by the Soviets. He died in Switzerland in August 1980.

If the German policy had been to kill Anne Frank and her father, they would not have survived Auschwitz-Birkenau. Their fate, as tragic as it was, cannot be reconciled with the Holocaust extermination story.