Outspoken Hollywood director says new film aims to put Adolf Hitler, who he has called an 'easy scapegoat' in the past, in his due historical context.
http://tinyurl.com/2cjy7ub

Jewish control of the media is preventing an open discussion of the Holocaust, prominent Hollywood director Oliver Stone told the Sunday Times, adding that the U.S. Jewish lobby was controlling Washington's foreign policy for years.

In the Sunday interview, Stone reportedly said U.S. public opinion was focused on the Holocaust as a result of the "Jewish domination of the media," adding that an upcoming film of him aims to put Adolf Hitler and Soviet dictator Joseph Stalin "in context."

"There's a major lobby in the United States," Stone said, adding that "they are hard workers. They stay on top of every comment, the most powerful lobby in Washington."

The famed Hollywood director of such films as "Platoon" and "JFK," also said that while "Hitler was a Frankenstein," there was also a "Dr Frankenstein."

"German industrialists, the Americans and the British. He had a lot of support," Stone told the Sunday Times, adding that "Hitler did far more damage to the Russians than the Jewish people, 25 or 30 [million killed]." 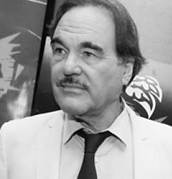 Referring to the alleged influence of the powerful Jewish lobby on U.S. foreign policy, Stone said that Israel had distorted "United States foreign policy for years," adding he felt U.S. policy toward Iran was "horrible."

Stone's comments to the Sunday times echo previous remarks by the Hollywood director, regarding what he perceives as the distorted view of figures such as Adolf Hitler and Josef Stalin in U.S. media.

Earlier this year, Stone, speaking at the at the Television Critics Association's semi-annual press tour in Pasadena said that "Hitler is an easy scapegoat throughout history and it's been used cheaply."

"He's the product of a series of actions. It's cause and effect ... People in America don't know the connection between World War I and World War II," Stone said, adding that through his documentary work he has been able to "walk in Stalin's shoes and Hitler's shoes to understand their point of view."

"We're going to educate our minds and liberalize them and broaden them. We want to move beyond opinions ... Go into the funding of the Nazi party. How many American corporations were involved, from GM through IBM. Hitler is just a man who could have easily been assassinated," Stone said.

It surprises me to be quoting Oliver Stone. But when Stone observes that “Hitler is just a man who could have easily been assassinated,” a little flash illuminates the brain.

It was one day in Vietnam in 1968. One day. It was a day like hundreds of other days that I did not see personally, but they happened. It was experienced by tens of thousands of other Americans and Vietnamese soldiers on hundreds of other streets, paddies and mountains for years. They, we, were all following orders from the Big Guy who on every side was only a man who could have been assassinated but we chose to kill each other instead. Following is the story of how I first imagined that it was a concept that had a moral edge to it that we were all ignoring. An edge that by the end of that one day, cut through my heart.

I ask you to forgive my language at the end. That’s how it was.

One thing has to be noticed here: that as much as Oliver Stone was eager to “to educate our minds and liberalize them and broaden them”, he has not produced this film he talked about to the Sunday Times in 2010. Six years later there is no film yet. Maybe the powerful Jewish lobby that operates in the US has convinced him otherwise or maybe he just lost interest in the topic… whatever it is, something does not smell good in this whole thing. We’ll see what the great Oliver Stone does… if anything… R. Hernandez