The "Holocaust" story is both true and important. However —

I wish we could reach more libertarians and anarchists with revisionism, but it's as if there is a wall between them and the subject. Libertarians, of all people, should realize that the demonizing of the German State under Hitler hasn't made anyone more free, but has only made the American State more powerful and intrusive at home and abroad.

"If revisionism is ever going to make its move, now is the hour. There is available an unlimited world-wide labor pool of retirees that will labor gratis.

"The 'leaders' of revisionism should stop doing yeoman labor and organize and coordinate this vast labor pool — as it does the labor to portray history as accurately as possible.

"So why don't you 'leaders' stop 'working' and get your heads together at a Summit and organize a world revisionist effort?" 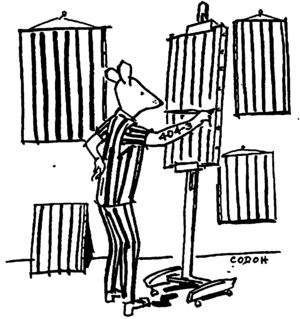 If you wonder, as a reporter for an Oregon paper did, why the cartoons in SR have all those little animals in them, they are our tribute to Art Spiegelman, creator of "Maus: A Survivor's Tale."

The writer has his finger on something, with respect to myself anyhow. In the back of my mind I have substantial plans laid out over the coming 12 and 18 months, and I could use help with them. The reality of my day-to-day work, however, is that I do most even thing by myself, flying like crazy by the seat of my pants.

After ten years streaking through the media I still haven't the money to pay a salary for one full-time employee. Our daughter, Magaly, helps me 10 hours a week while she's in college. Other than that, I do it all myself. When I'm cooking, I'm a one-man band. That's fine, but it reminds me of the old saw about the man who works too hard to make any money.

I work too hard to raise the funding that's really needed for me to do this work. I don't need a vast pool of labor to manage on top of managing the project as it is at this stage of the game. I need one individual man or woman to be responsible for getting together some entity, a Board of Directors perhaps, maybe something different, that will devise a program for funding the work I'm doing and what I could do if the funds were available — which would include funds for buying time to manage well what I'm managing on the fly now.

An editor for a major press trade magazine was on the phone to me last week when he asked what size my staff is. When I said I have no staff, just Magaly who helps part-time, he found it hard to believe. "You mean you're making all this trouble by yourself?"

"That's right," I said. "It's not as difficult as it looks, particularly when you have a little truth on your side."

"I thought you had four or five people working with you."

It isn't just me, of course. Some of you help me financially. Some with information. Others with ideas. Many of you have tried to help in ways I have not been able to take advantage of because I don't have the time. I have time to do only a fraction of what I could do if this project were funded in an orderly and sensible manner.

Is there anyone out there who has even the slightest idea about how such things are arranged and who can help arrange it?