This is the sort of thing we’re up against and one reason why it is so important for us to be on the Internet. The Nizkor Project (in Hebrew — "we will remember”) is only one of many sites on the World Wide Web that is posting massive amounts of holocaust-related materials — all of it reinforcing the orthodox viewpoint. 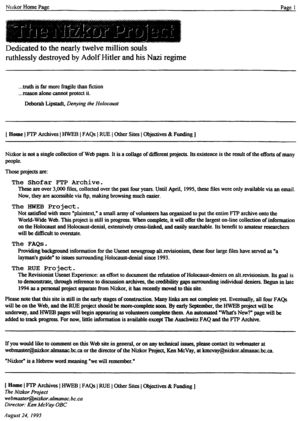 Most of the computer literate population of North America, Europe and the rest of the world, which includes nearly all media, whether electronic or print, all college campuses and most of the student press, are “wired” to the Internet.

Historically media, with the backing of the universities, has transmitted the orthodox holocaust story line to the public, but during the first half of the 1990s we demonstrated with the Campus Project that with a little imagination, traditional media can also be used successfully to forward revisionism to the media and campus. The Internet and the World Wide Web are part of a new electronic resource at the cutting edge of (primarily) American technology. The Internet is especially attractive to the largest part of our brightest young people, and it’s particularly attractive to students and student journalists. That’s the population the Campus/Internet Project will continue to address, it’s unthinkable that I should not use the Internet as one tool to reach out to that and other populations.

The Nizkor Project was established with the precise purpose of discrediting revisionist theory and revisionists as individuals. It was founded and is directed by Ken McVay, an American now living in Vancouver, Canada. Following are two paragraphs from his own Internet "Homepage,” written by himself I suppose.

"Today, utilizing a new computer and direct internet link, he is building on of the most extensive and thorough information bases about the Holocaust and the activities of racists and white supremacists [sic] in the world. McVay and his team of nearly 100 volunteers (my emphasis) devote countless hours to the maintenance and improvement of this massive collection — hours which represent over one-and-a-half million dollars of donated effort (my emphasis).

“At the moment, McVay is directing a massive effort to construct what will arguably become the world’s largest Holocaust-resource Web site, one which will offer over a gigabyte — if I have this right, one gigabite is a thousand “megabites.” A megabite is a million “bites.” A bite is one “character,” that is, one letter or one number — of material within the next few years, including the entire transcript of the Nuremberg Trials. His Web site has already proven itself to be an invaluable tool for Holocaust researchers, the media, students, and those concerned with the alarming rise of neo-Nazi [sic] activity on the Internet.”

And I’m sure it has become a tool of real significance. It would be absolutely pointless, as well as unprofessional, to allow all this information to be accessed by university students and others without attempting to make an effective response. That’s the role of the Campus / Internet Project.

Following is a reproduction of McVay’s Homepage, the first thing you see when you punch up his numbers on your keyboard.

[Editor's remark: See the image at the top; click to enlarge.]