As is clear from David Irving's letter (above). Nobel peace laureate Elie Wiesel has resumed his attacks on revisionists (perhaps someone showed him a copy of Smith’s Report No. 31, which exposed his hypocrisy in pressing for the rehabilitation of the German Carl von Ossietzky while ignoring the current plight of Israeli Mordechai Vanunu).

Careful students of Wiesel's career, from Robert Faurisson to Professor Howard M. Sachar (of George Washington University), have easily demonstrated this “Super Survivor” for the intellectual and moral fraud he’s been since at least the 1950’s. Yet the facts continue to escape Wiesel’s admirers, who, as Professor Sachar writes, over the years have failed to consider whether:

... that in negotiating a merger of the Holocaust industry with the mysticism vocation, Wiesel might have been staking out a high assay lode of vast entrepreneurial potential... By [1976], his platform technique honed to perfection (a Chasidic rebbe addressing his disciples), he was demanding and securing honoraria on the lecture circuit unmatched in Jewish forensic history. (A History of the Jews of America, New York: Knopf, 1992, p. 849.)

It has always been difficult to confront and expose Wiesel. He’s no pushover. But early last month I collaborated in a simple tactical exercise which may prove to be successful if pursued. On 6 May, Elie Wiesel bobbed up at the University of Washington (Seattle) to speak on “Building a Moral Society.” Campus activists from Puget Sound area universities were waiting for him. We had put together and formatted 15 interesting questions for Super Survivor and our student friends at WU had made 500 photocopies of them. Although unable to gain access to the lecture, they succeeded in handing out and posting hundreds of leaflets, causing, in the words of one WU student, “quite a stir.” 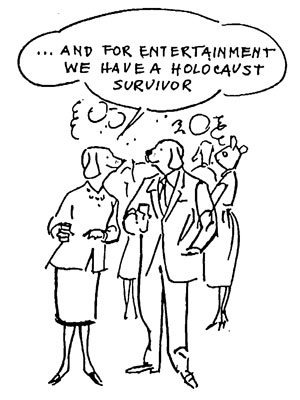 ... And for entertainment we have a Holocaust survivor

These are the questions that contributed to the “stir.”

Wiesel told his listeners at Washington University, “I teach my students the art of questioning, not the art of answering.” Our friends who flyered Wiesel’s audience at WU forced me to think about the coming academic year. I will develop a flyer on Elie Wiesel based on the 15 Questions, place notices on the Web, and in this newsletter asking to be kept informed of where Wiesel is speaking, and look for students to leaflet every one of his audiences.