Hollywood mega-mogul Steven Spielberg, maker of the turgid and dishonest Holocaust blockbuster Schindler's List, has been given $1 million by the U.S. Treasury, for a charity he set up to videotape and computerize the memories of “survivors” of the Holocaust. A photograph appearing in the Washington Post shows Spielberg receiving a blown-up facsimile of the check (the sort which are presented to winners of state lotteries) from U.S. Senators Barbara Boxer (D-CA) and Arlen Specter (R-PA). Forbes magazine puts Spielberg's personal fortune at $700 million. Here's what CODOH, in an op-ed piece sent electronically to hundreds of American writers and editors, had to say about Spielberg's Treasury raid:

Recently Hollywood moviemaker Steven Spielberg, in his capacity as founder and head of something called the Survivors of the Shoah Visual History Foundation, was handed a check for $1 million, drawn on the U.S. 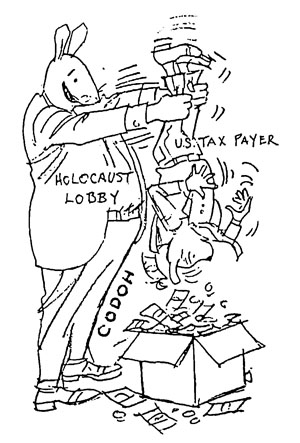 Treasury, by two politicians, one of whom, Senator Barbara Boxer (D-CA), he has supported through campaign contributions. One hand dirties the other.

Spielberg's charity's other benefactor (if the American taxpayer be ignored) was none other than Senator Arlen Specter (R-PA), sometime presidential candidate and moving force behind the Warren Commission report on the assassination of John Kennedy. As Specter helped Boxer hand Spielberg the check (an enlarged reproduction of the sort awarded golfers and lottery winners), the Pennsylvania senator pronounced grandly, "This... also is to vouch for the authenticity and to validate that the Holocaust really happened."

Setting aside the knotty question of whether a similar U.S. grant might so easily have validated the findings of the Warren Report, many Americans, not just Holocaust revisionists, will be disturbed to learn that their government, using their tax money, is subsidizing an official version of a complex historical question. Yet, if anything, thanks in chief to the work of revisionist scholars around the world (many of whom have suffered legal, economic, and physical persecution), prior certitudes about the Holocaust, from the existence of a Hitler order to exterminate the Jews to the functioning and indeed the very existence of the fabled gas chambers at Auschwitz, Dachau and elsewhere, have had to be re-examined—and often abandoned—by orthodox scholars of the Holocaust. Why else the constant clamor that the Holocaust need be "authenticated" and "validated" anew?

Of all the shaky evidence that underpins the official version of the Holocaust, none is so vulnerable to question as the recollections of survivors, the famed "eyewitness" testimonies. Years ago, the director of Yad Vashem,

Israel's national Holocaust museum, revealed that over half the testimonies on file were unusable because internal and other evidence showed that the "witnesses" hadn't even been at the places they were testifying about.

And revisionist scholars and organizations—including Committee for Open Debate on the Holocaust—have homed in on the exaggerations, errors, slanders, and outright lies, not infrequently delivered from the witness stand, of many of the most renowned, and the most pernicious, of Holocaust survivors, including Simon Wiesenthal, Jan Karski, and Elie Wiesel.

All the worse for Spielberg's grandiose project, which aims to videotape and digitalize (for access over the Internet) the recollections of thousands of alleged Holocaust survivors, half a century after the fact. Spielberg's survivor interviews, conducted by personnel with as little as 25 hours training, promise little in the way of factual accuracy. More professional, but less glitzy, archivists of survivor reminiscence, such as Professor Geoffrey Hartman (of the Fortunoff Video Archive for Holocaust Testimonies at Yale) and Marek Web (of the Yivo Institute for Jewish Research in New York) have testified to that.

Worse still, worse even than this successful Treasury raid by a professed philanthropist worth an estimated $700 million in the summer doldrums during a (very Holocaust friendly) election year, is the disquieting possibility that Spielberg intends to use these "testimonies" as he has used his movies—from the “Indiana Jones” series to Schindler's List—in the service of vulgar Kraut and Arab bashing, and (at a time when the Holocaust industry expands its list of villains to include Poles and other victims of German conquest as well as sundry non-German “collaborators” and "puppets") to enshrine a tawdry Jewish triumphalism.

Spielberg, his fellow Holocaustomaniacs, and the politicians who pander to them, should know that while revisionists deplore their being taxed-once more—to support a contentious historical theory, they're more than ready to confront the testimony of Spielberg's supposed witnesses. They—like a growing number of their fellow Americans—are aware that crimes and complexities of the Second World War demand more than megabucks melodrama. If Spielberg thinks he can silence Holocaust revisionism with Hollywood history, he better think again: his taxpayer-supported "testimonies," subjected to careful analysis, will likely go the way of Jurassic Park and the Temple of Doom, collapsing in a shower of plaster and plastic, tinsel and lies.