For Email Newsletters you can trust
Contribute
or find other ways to contribute »
Popular items
About the Author
George Brewer
George Brewer is a retired journalist and scholar. He served as the first editor of The Revisionist.
Read more »
Featured documents
Search the Library
Advanced Search

Al Gore and the Politics of Denial
By George Brewer
Published: 2001-05-01
Report a problem

Revisionists are used to being made fun of and being called names. The usual epithet these days is "denier" as in "Holocaust Denier." Of course, revisionists object to the name. They don't feel they are "denying" anything, just this or that aspect of the terrible fate of the Jewish people in World War Two. Indeed, if anything, revisionists would argue that their opponents, the upholders of the traditional Holocaust story, are the real deniers, because they are the ones maintaining belief when all the facts speak the contrary.

Yet these protestations on the part of revisionists rather miss the point. For in fact, the idea behind the word "denial" is something much more subtle than the mere rejectionism of which revisionists are usually accused, deeper than the feeble "canary in the mine" analysis of Deborah Lipstadt. Nietzsche described the nature of denial quite succinctly over a century ago, in one of the aphorisms in Beyond Good and Evil: (IV,68) "'I have done that,' says my memory. 'I cannot have done that,' says my pride, and remains inexorable. Eventually, memory yields." To be sure, Kaufmann was right to find here a precursor of Freudian repression theory, but there is more. For on reflection we begin to see that denial is not restricted solely to those who suppress the past out of pride, it also applies to those who will not see the present for the same reason. In a word, denial describes an inability to cope with the facts, and the best exemplar today is the failed presidential candidate, Vice President Albert Gore. 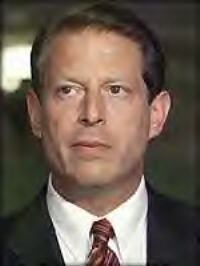 Al Gore lost the election: there is no doubt. There are two reasons why this can be stated as a certainty. In the first place, Gore lost because on the morning of the day after the election he still had not won. Furthermore, in the past two weeks he has ensured that by the time this campaign is over there will be practically nothing left to win.

For most Americans, a presidential election is supposed to be a unifying, almost cathartic event. As the returns roll in, a gradual sense of inevitability takes hold, a sort of media-produced chrysalis starts to crack, and by the end of the evening one candidate has emerged as the choice of the American people, as the President of the United States. Unfortunately for both Gore and George W. Bush, in this year's election nothing of the sort occurred. Instead of a steady drumbeat of support for one candidate or another, growing in volume, we had numerous false starts, and back and forths, all night long. As a result, no one could truly step forth as "the President", and the failure to capture that prize on election night will never be completely put right. Whoever wins will have to bear that burden of an uncertain and lackluster affirmation. Thus, the presidency was lost, even before it was won.

The uncertainty of election night, we now know, was due to the absolute closeness of the election, with neither Gore nor Bush succeeding in gaining a clear cut majority, particularly in the crucial swing state of Florida, whose twenty five electoral votes would decide the election. The only election in the memory of most Americans that was this close came in 1960, when John F. Kennedy narrowly edged out Richard M. Nixon by about 100,000 votes. As many commentators have reminded us, Nixon, claiming that it would hurt the country to pursue recounts, decided to concede, so we will never know what might have occurred if he had continued to fight against the decision. But Al Gore has given us a good idea.

Having failed by the morning after to capture the presidency, and trailing Bush by a minuscule margin in Florida, Gore might have still spared something for the next president if he had conceded. Yet by this time, Gore and his Democratic cronies were operating on a level of expectation that had no connection to reality. They had depended on the exit polls: which showed Gore the clear winner. They depended on the TV networks: which called Florida for Gore at 7:30 PM. They were caught up in the belief of inaccurate tallies and uncounted Gore votes in Palm Beach County, due to the infamous "Butterfly" ballot, which was fanned into a huge controversy. They were certain that they had won, except that there was one element missing: the votes. And so the great vote hunt of 2000 began.

To accuse Gore and his minions of attempting to "steal" the election misses the point, and suggests that they were acting with a lack of sincerity. On the contrary. They were convinced that they had won, it just wasn't reflected in the vote count, at least, not yet. Of course, the expectations of election night were only part of this conviction. Another element undoubtedly involved Gore's sense of personal pride, if not arrogance. Still another, and particularly insidious element, was tellingly revealed by Gore's leading flack, Bill Daley, who constantly intoned the "will of the people" as calling for a Gore presidency. Students of history and politics are well aware that the "will of the people" was the excuse offered by the Bolsheviks to justify eighty years of communist tyranny.

The original count gave Governor Bush a lead of about two thousand votes. A machine recount of the punch-card ballots, mandated by Florida law for close elections, cut that lead to three hundred votes. While the American public waited for the absentee ballots to be counted, Gore's supporters feverishly went to work, sifting through the punch-cards to find the votes that must be there, but restricting their search only to heavily Democratic counties. The absentee ballots broke almost two to one for Bush — even after a determined effort by Gore's supporters to disenfranchise the men and women of the Armed Forces of the United States of America. Now the effort was reduced to the tea-leaves level of divination, attempting to "read" the "intent" of voters by the paper shards or chads left on the ballots. Given the fact that the Supreme Court of Florida, expressing its own version of the "will of the people", has given the Gore people an additional five days to carry on with this foolishness it is quite possible that somehow the "missing" votes will be made to appear.

Nevertheless it is a fact that two weeks after the election Al Gore has never led in the state of Florida.

We said above that Al Gore lost the election, because there was no affirmation on the day after Election Night. Of course, the same could be said of George W. Bush. Still, Gore lost the election on a deeper level, or at least took it to a lower level, due to the crazed antics of his supporters over the past two weeks. In order to gain advantage, and the all-important votes, they have, to paraphrase what we used to say about Vietnam, destroyed the majesty of the Presidency in order to win it. A White House built on chad will not stand.

We have to keep in mind that a democracy only works if everyone abides by the rules without even the hint of rejection. The only way a close election can be acceptable is if there is a quick concession and a rallying behind the nominal leader. But that did not happen in this case. Thanks to Gore's lack of self-controlling authority, the next president is bound to rule over a divided electorate. If Bush wins, he will have to contend with the legions of Democrats who have been kept alive by Gore for weeks with false hopes, and if Gore wins, there will be many Republicans bitterly resentful of what they will feel was a stolen and debased election. Let's not kid ourselves: any election decided by judges could hardly be described otherwise.

The ultimate responsibility for this fracturing of the American electorate falls to Al Gore, who refused to accept that he had lost, who, in fact, denied that he had lost and wrecked the prize of the presidency in the process. Acting out the politics of his own denial, Al Gore has been blind, led by his pride on a path of destruction worthy of Greek tragedy.

We began by discussing denial as it pertains to Holocaust revisionists. While most revisionists are simple skeptics about conventional wisdom and received points of view, it is true that there are some revisionists whose denial of Nazi atrocity is rather complete. Such revisionists, who have a hard time admitting that any Jews were unjustly killed in World War Two, are usually derided as "anti-Semites" by the establishment. But this isn't true. Their motivation is a combination of pro-German ethnic pride, as well as a deep affection for the better angels of the German Nation that rises to the level of a profound patriotism. Pride and patriotism, then, is the essence of their "denial." In the case of Al Gore, on the other hand, denial is all about pride, and pride alone.