The Non-Jewish Stake in the Holocaust Mythology
By Paul Grubach
Published: 2010-01-01
Report a problem

In the early 1980s, the late Revisionist scholar Dr. Charles Weber wrote a very important, but now largely forgotten, essay concerning the non-Jewish groups that promote and benefit from the Holocaust mythology. Weber noted that, although the Jewish-Zionist power elite is the predominant force behind the Holocaust ideology, they are not the only entity behind it.

There are Gentile groups that also promote and benefit from the Holocaust ideology, and this is certainly one of the reasons why it survives and flourishes. “As corrosive, divisive and destructive as the ‘Holocaust’ material and extermination thesis are,” Weber noted, “we must certainly not consider Jews exclusively responsible for their continued propagation.”

There are some who still operate under the illusion that the sole reason the Holocaust mythology survives and flourishes is because of Jewish-Zionist power and influence. This is a mistaken viewpoint.

Consider the case of Russia. Here is a recent statement of the Russian representative to the United Nations in regard to the 2007 United Nations Resolution condemning “Holocaust denial”;: “[T]he Red Army had freed the Auschwitz death camp, one of the largest. The memory of the heroism of the Soviet soldiers and the many millions of victims in his country could never reconcile itself with those of ‘opportunistic political interest’ who sought to distort the significance of that history.”

As far back as 1980, Revisionist historian Weber noted that Holocaust material proved to be a useful ideological weapon in a number of Russian-Soviet propaganda efforts, including the Nuremberg trials. It enabled the Soviet Union to cover up, hide and obliterate by contrast the awareness of war crimes perpetrated by the Red Army against other nations and peoples, such as the Katyn massacre in Poland.

The Soviet Union has been consigned to the dustbin of history, but the promotion of the Holocaust ideology still serves the interests of the current Russian government, as they want to instill a sense of national pride in the Russian masses. The Holocaust mythology forms the cornerstone of Great Russian nationalism, as it casts the Russian people in the role of “heroic liberators”; during WWII.

UN Russian Federation representative Vitaly Churkin hinted that this is what is behind Russia’s support of the 2007 United Nations Resolution condemning “Holocaust denial”;: “[M]ember States were bound to include in that condemnation attempts to revise the history of the Second World War and the merits of those who took up arms to fight the Nazis. Any attempt to make heroic the henchmen of fascism must be rejected.”

In an August 2009 joint Russian-Israeli statement, Russian President Dmitry Medvedev and his Israeli counterpart, Shimon Peres, declared: “We express our deep indignation at attempts to deny the great contribution that the Russian people and other peoples of the Soviet Union brought to the victory over Nazi Germany and also (attempts) to deny the Holocaust of European Jews…No kind of attempt to revise history can diminish the clear facts.”

The “Nazi gas chamber”; mythology provides the Russian people with an exaggerated self-image as heroic liberators and freedom fighters. After all, so the propaganda line goes, they “saved the world”; from the clutches of the “evil Germans”; who were “attempting to exterminate”; the “inferior races”; who opposed them. Take away the Holocaust mythology, and what do we end up with?

A repudiation of the Holocaust ideology would allow a reappraisal of the crimes, atrocities, genocide and oppression committed by the Stalinist regime. The end result of such historical revisionism would be the demolition of a pillar of Russian patriotic ideology, and the worldwide realization that Stalinist Communism was more oppressive and evil than National Socialism. Indeed, even the bitter intellectual opponent of Holocaust revisionism, Deborah Lipstadt, admits that Stalin killed more people than Hitler ever did.

Holocaust historian Robert Jan van Pelt revealed reasons why Poland has a vested interest in promoting the Holocaust ideology. In 1947, the Polish government enacted a law that commemorated the martyrdom of Poland and other nations at the Auschwitz concentration camp. As in the case of Russia, the Holocaust ideology was made into a cornerstone of Polish nationalism.

It is now admitted by mainstream historians that the claim of four million people murdered at Auschwitz was a deliberate myth. Professor van Pelt also pointed out how the “four-million-murdered-at-Auschwitz”; lie served the interests of successive Polish governments. He wrote: "As relations between the East and West deteriorated after the war, with the largest part of Germany becoming part of NATO and with that country refusing to recognize the legitimacy of postwar Polish annexation of the former German territories of East Prussia, Pomerania, and Silesia, the number of victims [at Auschwitz concentration camp] became a political issue. The communist rulers of Poland were unwilling to give an inch on their claims against Germany as long as the Bonn government did not recognize the territorial integrity of the People’s Republic of Poland, and therefore they continued to maintain, as a matter of policy, that 4 million people had been killed in Auschwitz.”

Whether the Polish position vis-à-vis the disputed territories is legitimate or not, Polish authorities still have an ulterior vested interest in promoting the Holocaust ideology. Not only does it serve as a cornerstone of Polish nationalism, but it provides a "safeguard" against any future German demand that Poland give back the disputed territories to Germany. Many Poles fear in their hearts that the post-war state of Poland stands and falls with Auschwitz. 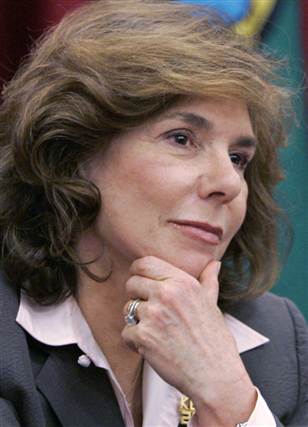 For many influential non-Jewish, American and European liberals, belief in the Holocaust has replaced belief in God as the supreme virtue. Expressing a widely held sentiment among liberal US political elites, Teresa Heinz Kerry, wife of former presidential candidate John Kerry, stated in the highly influential Forward: “Need it be said again? The gas chambers, the bureaucratic system of murder, the efforts to sever an entire people from their place in the world, did happen, did exist and remains a unifying cause for those who choose justice, now and forever more.” Thus, for left-leaning Gentile liberals, the Holocaust ideology is a motivating force for social action.

Non-Jewish American and British power elites also have a vested interest in promoting the Holocaust ideology. As historian Jeffrey Herf recently revealed in his study, The Jewish Enemy, the Holocaust ideology paints the American and British war effort during WWII in a good and ethical light, and thus “justifies”; the entire Allied war effort against Germany.

As Herf makes clear, one of the important characteristics of mass propaganda is that it appeals to stark contrasts between good and evil. The Holocaust doctrine fits the bill perfectly. He wrote: “Reports of the Final Solution [the Nazi attempt to exterminate the Jews during WWII] underscored the stark moral dichotomy between Nazi Germany and its allies, on the one hand, and the United Nations [Americans, British, etc.,] on the other. They reinforced the Allies’ conviction that this was a war between freedom and tyranny, good and evil, civilization and barbarism.”

In a formal declaration reflecting the official view of the United States government, it was stated: “The 1945 defeat of Nazi Germany by the U.S. and its allies finally put a stop to dictator Adolph [sic] Hitler’s campaign of genocide.”

In a word, take away the Holocaust ideology and one important “justification”; of the American and British war effort against Germany is consigned to the dustbin of history. Americans and Britons will start asking uncomfortable questions, such as: Why did we go to war with Germany? Maybe we should not have gone to war with Germany, and maybe it was a huge error to be allied with the murderous Stalinist regime?

There are certainly other important examples of non-Jews who promote and benefit from the Holocaust ideology. The reader should not misunderstand me. The International Jewish-Zionist power elite and the state of Israel are the major beneficiaries and promoters of the Holocaust ideology, but they are not the sole promoters and beneficiaries. The story is much more complicated. The major reason that the traditional Holocaust story still survives is that there are a wide range of powerful groups, both Jewish and non-Jewish, that benefit from its perpetuation.

Copyright 2010; a longer, footnoted version of this article can be read here.