"60 Minutes," America's single most widely viewed television program and by far the most influential public affairs program, devoted the lead segment of its March 20 broadcast to Holocaust revisionism.[1] In spite of its clearly hostile bias and deceitful omissions and distortions, this popular, primetime CBS News broadcast was a major media advance for historical revisionism.

Entitled "Who Says It Never Happened?," the rather unfocused segment was narrated by Mike Wallace, one of America's most recognized and experienced journalists. It began with Wallace asserting that revisionists claim "that the Holocaust never happened." In fact, revisionist scholars have gone to considerable length to carefully explain that they do not "deny" the Holocaust, or say that it "never happened."

German-Canadian publisher Ernst Zündel was the only revisionist who was interviewed specifically for this broadcast (although several others were shown on screen from file footage). However, from an interview with him that lasted about an hour and a half, only about four minutes were shown. Many telling points made by Zündel to Wallace were not aired.

Mark Weber, editor of this Journal, and David Cole, the youthful, Jewish-born revisionist filmmaker, were shown from clips of their April 1992 appearance on the nationally-syndicated "Montel Williams Show."[2] Weber was shown explaining that every Jew who died during the Second World War, "of whatever cause, is [misleadingly] considered, quote, 'a victim of the Holocaust.' That is, [even] Jews who died in Allied bombing attacks..."

Weber was identified, inaccurately, as "a white supremacist who now heads up something called the Institute for Historical Review." (A letter to "60 Minutes" from the IHR correcting this error was never broadcast, or even acknowledged.) The Journal of Historical Review was introduced to millions of viewers as the front cover of the Nov.-Dec. 1993 issue was shown on screen.

Cole said that "the building at Auschwitz that you go to that is said to be the gas chamber was, in fact, the morgue." He went on to explain that, on the basis of his own investigation, he now believes that "the evidence saying that there were no gas chambers is a lot stronger than any of the evidence that can be presented saying there were." A brief clip showing Cole and Zündel together at Auschwitz was shown.

Bradley Smith, chairman of the "Committee for Open Debate on the Holocaust" (CODOH) and director of the IHR's Media Project, was shown in his California home as he explained, "My job is to bring about open debate on the only historical event of the West that's taboo."

Fearful that this "60 Minutes" broadcast would turn out to be little more than a hostile "hatchet job," Smith and Cole finally decided – after considerable negotiation and in spite of personal assurances from Wallace of fair treatment – not to be interviewed for this show. As it turned out, their concerns were well justified.

Introducing the segment, Wallace told viewers that "no serious historians give them [revisionists] credence." To help sustain this lie, "60 Minutes" took care not to invite French professor Robert Faurisson, British historian David Irving, or any other revisionist scholar to be interviewed for the segment, even though associate producers had earlier conducted preliminary interviews with both Irving and Weber.

Although Zündel was portrayed as the most representative spokesman for the "deniers," viewers were not told that revisionist scholars such as Faurisson and Irving do not share all of the German-Canadian publicist's views on the Holocaust issue. For example, Zündel estimated that "the number of Jews who died under the Nazis" is "at the lower 300,000 range." Faurisson and Irving have given considerably higher estimates. 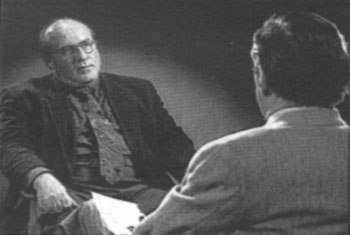 A seemingly effective strike against the revisionist case was scored in citing an October 4, 1943, speech by SS chief Heinrich Himmler, who was quoted as saying: "The Jewish race is being exterminated... We have the duty towards our people to destroy those people that wanted to destroy us..." Understandably, this passage has been widely cited as particularly damning evidence of a German wartime policy to kill Europe's Jews.

Zündel suggested to Wallace that this speech, or at least this portion of it, is forged – a skepticism shared by Arthur Butz and Wilhelm Stäglich. (Other revisionists, including Faurisson and Irving, tend to accept it as genuine.) "60 Minutes" then presented, from the National Archives in Washington, DC, a recording of the original speech, along with Himmler's notes for it. Genuine or not, revisionist scholars are in agreement that brief passage quoted on "60 Minutes" is misleadingly translated and taken out of context.[3] The word used here that is rendered as "exterminate" ("ausrotten") more accurately means "root out," eradicate, "wipe out," or "eliminate."

In spite of the harshness of his language, what Himmler was referring to here was not a program of extermination, but rather a policy of brutal suppression, particularly in Poland and the occupied Soviet territories. He made this clear, for example, in a similar speech he gave a few weeks later. Speaking frankly on December 16, 1943 to a meeting of German officers in Weimar, Himmler explained the context of his ruthless policy towards the Jews.[4] Other comments made by Himmler throughout this period likewise show that he was not carrying out a policy of extermination.

Much of the "60 Minutes" segment dealt with the furor on campuses across the country set off by Smith's campaign to place advertisements in student papers calling for open debate on the Holocaust issue. Smith's CODOH ad has appeared, in one form or another, in 31 student newspapers across the country, Wallace reported. "60 Minutes" focused on the uproar provoked by the ad at Queen's College in New York.

After Holocaust revisionism was sensationally described as "a kind of glue that holds the radical right together," Deborah Lipstadt, an Emory University professor and author of the anti-revisionist polemic Denying the Holocaust, was shown saying that student papers must not accept Smith's ads.[5]

Along with her ideological comrades in the Anti-Defamation League, the Simon Wiesenthal Center and other Zionist pressure groups, Liptstadt contemptuously insists that, while she is intelligent and perceptive enough to detect the supposedly dangerous errors in Smith's ad, university students and professors are not.

As Wallace took care to specify, revisionists challenge claims of mass killings of Jews in wartime gas chambers. To counter revisionist arguments, and "prove" that Jews were indeed gassed as alleged, viewers were shown a film clip of the infamous "gas chamber" (labeled "Brausebad" or shower) at the Dachau concentration camp. This same film footage was shown at the 1945-46 Nuremberg Trial, where it was cited to prove German "gassings" of prisoners. What "60 Minutes" declined to explain to its millions of viewers is that, as every serious and reputable historian of the subject now acknowledges, no one was ever "gassed" at Dachau, and the room shown here was never used to kill anyone. 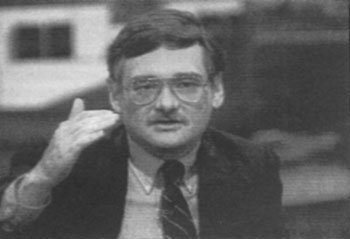 Mark Weber stresses a point. This segment, shown on "60 Minutes," was re-broadcast from his April 1992 appearance on the "Montel Williams" show.

As further "proof" for the Holocaust extermination story, viewers were shown familiar film taken by Allied photographers at just-liberated German camps, especially Bergen-Belsen. "60 Minutes" viewers were not told that it is now well established that the dead and dying inmates shown in these horrific film clips were victims not of "gassing," but of disease and malnutrition that were direct consequences of the war. If the German policy had been to kill these people, none of them would have survived to be liberated by Allied troops.

Michael Berenbaum, research director of the US Holocaust Memorial Museum in Washington, DC, was shown citing "the systematic bills of lading for Zyklon B [and] the instructions for the use of Zyklon B in gassing" as evidence that "the Germans" used this widely available commercial pesticide to kill millions of Jews. What neither Berenbaum nor "60 Minutes" bothered to tell viewers is that precisely such evidence clearly establishes the widespread use of Zyklon for non-homicidal disinfestation and delousing purposes.

In fact, not a single wartime document exists to show that Zyklon was used to kill human beings. (And according to prominent anti-revisionist Holocaust researcher Jean-Claude Pressac, 95 percent of the Zyklon supplied to Auschwitz was in delousing and disinfestation – that is, for purposes of saving human lives.)

For some years now, Holocaust revisionists have been victims of an often vicious campaign of persecution that includes legal suppression, terror and physical violence. That no mention whatsoever of this sustained campaign was made by "60 Minutes" underscores the deliberately slanted nature of this CBS News production.[6]

On January 22, 1992, for example, thugs of the Jewish Defense League assaulted David Cole during a meeting at the University of California at Los Angeles, hitting him in the face and bloodying his nose. JDL leader Irv Rubin also tried to push Cole down a flight of stairs. Even though a CBS News crew (along with camera crews of two Los Angeles television stations) recorded the tumult on video, not a minute of it has ever been broadcast.[7] 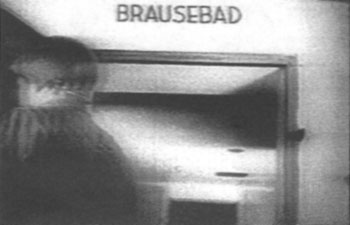 An American GI opens the door of the bogus "gas chamber" at the Dachau concentration camp. This portion of a 1945 US propaganda film was shown to millions of "60 Minutes" and "Donahue" viewers as "proof" that the Germans killed Jews in gas chambers.

Referring to Holocaust killings of Jews, Berenbaum said to Wallace: "In a very real way, the Germans were proud of what they were doing... because they thought they were doing the world a favor in getting rid of the Jews..." Of course, similarly defamatory and stereotypical talk about "the Jews," or virtually any other group, simply would not be permitted on "60 Minutes" without clear and immediate condemnation. That such offensive language – by a US government official no less – is permitted to appear without challenge on a prime-time public affairs television program points up the extent to which Americans have been conditioned to accept such talk as entirely normal.

In spite of its predictable bias, this "60 Minutes" broadcast represents another important milestone for Holocaust revisionism. Because of it, millions of American learned, many of them for the first time, of the existence of a dedicated, articulate and rather broad-based movement that rejects the Six Million extermination story.

It is not the critic who counts; not the man who points out how the strong man stumbles, or where the doer of deeds could have done them better. The credit belongs to the man who is actually in the arena, whose face is marred by dust and sweat and blood; who strives valiantly; who errs, and comes short again and again; because there is no effort without error and shortcoming; but who does actually strive to do the deeds; who knows the great enthusiasms, the great devotions; who spends himself in a worthy cause, who at the best knows in the end the triumphs of high achievement and who at the worst, if he fails, at least fails while daring greatly, so that his place shall never be with those cold and timid souls who know neither victory nor defeat.
—Theodore Roosevelt