The Man in the Glass Cage
Bullet-proof, Soundproof: What's the Difference?
By Jett Rucker
Published: 2018-10-20
Report a problem 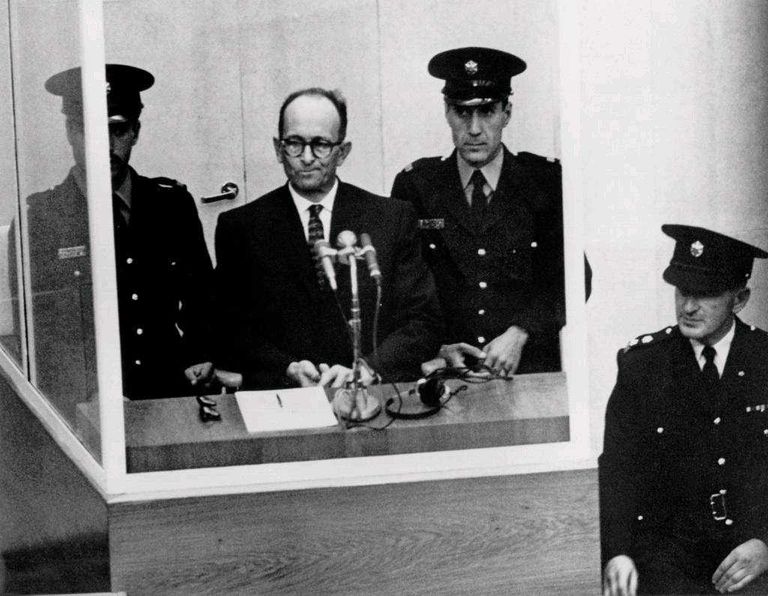 Probably the most-famous man-in-a-glass-cage in history was Adolf Eichmann, an ex-lieutenant colonel of National-Socialist Germany’s vaunted Schutzstaffel, better known as the SS. His 1961 Jerusalem trial for crimes alleged to have been committed outside Israel before the creation of the Israeli state was broadcast in near-real time over television, making it one of the first such events so televised. The black-and-white images of Eichmann pleading for his life were common on television screens all over the world for the trial’s 125-day duration, and so was the sight of the famous glass enclosure that Eichmann was placed in to give his testimony. Of course, denying, even minimizing his crimes would obviously not have gained him a reprieve from being hanged, so much of his testimony was confessional in nature, but so stage-managed as not to resemble too-closely the mawkish self-accusation made familiar to observers everywhere in ham-handed Soviet productions such as the 1936-38 Moscow Trials, in which conspirators against the Soviet state propounded their sins so fulsomely as to reveal their contrivedness to all but the most-blinkered of spectators.

The glass enclosure was said to be bullet-proof, and although it was never tested with actual gunfire, there would seem to be little reason to suppose that it wasn’t bullet-proof. But it was also soundproof, or nearly so. The structure had a metal roof, which might be justified on grounds of providing it with structural strength, but it also contributed to the enclosure’s sound-proofness, such that Eichmann had to speak into a microphone in order to be heard outside the booth. If the system had any kill switch(es), it does not appear that any such was actually used during the proceedings.

However, Eichmann was in a position to reveal damning testimony against a number of then-prominent Israeli leaders over collaboration with Eichmann’s National-Socialist German government that occurred in the late 1930s, before Germany and Great Britain declared war on each other. Obviously, any such testimony was scrupulously not elicited in the questioning Eichmann was subjected to, nor would the slightest trace of any such thing have appeared in whatever scripts Eichmann was made to recite. This collaboration is referred to in some detail in an extended book review by Ron Unz published on August 6, 2018 in the Unz Review, in which Unz poses questions like the following:

A more cynical observer might find it a very odd coincidence that the first prominent Nazi the Israelis made such an effort to track down and kill had been their closest former political ally and collaborator.

Observers remembering the past alliances of the US with Antonio Noriega of Panama, Saddam Hussein of Iraq and/or Osama bin Laden of al Queda might find something familiar in this turn of events. The constant presence of two burly guards in the booth with Eichmann accords well with this scenario; one imagines that all their “labor” might have been obviated by the simple expedient of chaining Eichmann’s ankles to the floor, safely concealed from sight by the non-glass lower panels of his “bullet-proof” enclosure. It’s easy to suppose that the guards, either of whom obviously could have overpowered Eichmann, disposed of a gag, handcuffs and other means of swiftly silencing any off-script utterances Eichmann might have attempted in a suicidal paroxysm. But such “trials” are quite nothing if not theater. Shoah trials, they might be called from today’s perspective.

I cannot claim credit for the riveting speculation that the real purpose of the enclosure, and the guards, was to make certain Eichmann stayed on-script with his every word. The notion appears in Unz’s book review:

Presumably, harsh means were employed to persuade him not to reveal any of these dangerous pre-war secrets at his Jerusalem trial, and one might wonder if the reason he was famously kept in an enclosed glass booth was to ensure that the sound could quickly be cut off if he started to stray from the agreed upon script.

The scenario of a “Nazi” captive being made to sing for his life and then executed for his troubles is as old as … how old might such a sequence be? As old as Scheherazade and a thousand-and-one Arabian nights? However old, how could its age dissuade a potential victim from trying, against all trying, to win a last, final fingerhold on life, precious life, if only for one hour more, one minute, one…?

Interestingly, half a century after the trial for which it was built, the enclosure itself has acquired a certain celebrity of its own. At the initiative of entertainment mogul Milton Maltz, namesake of Cleveland’s Maltz Museum of Jewish Heritage, “the” enclosure (it isn’t clear whether it really was the enclosure, or a replica) toured New York and Cleveland. Its “debut” at least outside Israel, was on February 17, 2016 at Maltz’s Cleveland establishment. This article promises that the exhibit, which presents Eichmann’s abduction and his sentencing and execution, will travel to various other cities in the US. As of October 19, 2018, the exhibit is in South Florida, and a person at the host museum in Dania, Florida informed me over the telephone that the enclosure on display is in fact a “replica” of the original—perhaps understandable in view of how heavy it would be if in fact all “bullet-proof” glass and tellingly in keeping with the replica nature of the gas chambers in “Nazi death camps” and other artifacts of the savage treatment purportedly visited upon Europe’s Jews by the National-Socialist Germans who lost World War II.

The knowledge in Eichmann’s memories, which he disclosed neither in his trial testimony nor in the two-part series in Life Magazine in which he recounted his activities carefully compartmented from those in which he conspired with Zionist leaders against the British occupiers of the coveted homeland of Zion, Palestine, was a veritable atomic bomb to the moral legitimacy of the Zionist movement that had secured the establishment of Israel a mere 12 years before his abduction. Eichmann had to be controlled, to sing the Israeli song, and thereafter to be hanged, as he was, in Israel’s prison at Ramla in 1962.

Comparisons with the 1946 performances of Rudolf Hֲöss, former commandant of the Auschwitz Concentration Camp, are irresistible, unless, of course, you feel Höss was spouting accurate (and informed) truths, instead of contrived stories, á la Scheherazade, to prolong or even save his life in the face of lethal charges by actors who had complete disposition not only of his own life, but of those (he was at least led to believe) of those whom he held most-dear, his wife and children.

Eichmann’s Israeli captors, so far as is known, did not threaten Eichmann’s family members (still in Argentina), but the proposition that they did not offer him ways of deferring, or eliminating, the power of (his) life or death of which they disposed is simply inadmissible. Eichmann “acted” for his life, and lost.

The outcome was foreordained. And if, bound and gagged as he effectively was, he had sought, like Icarus, to fly too close to the sun, he would have plummeted to the hard earth, his wings melted as surely as the gag would have been placed across his mouth.

By such are we “informed” of the sins of those who lost the war.