Actually, revisionism means nothing more or less than the effort to revise the historical record in the light of a more complete collection of historical facts, a more calm political atmosphere, and a more objective attitude.[1]

While it is understandable that the awesome combination of propaganda and patriotism create a sizable obstacle to truth during wartime, logic suggests that conclusion of such events would allow more-objective scholarship to occur. In fact, Barnes’s experience following 11 November 1918 certainly contributed to the formation of his definition. Barnes discovered one of the first articles to revise the origins of the Great War in July of 1920 when he first read historian Sidney Fay’s “New Light on the Origins of the World War, I. Berlin and Vienna, to July 29.”[2] Until that time Barnes had not only accepted the “official” version of the war’s origins, he had actively advocated military intervention even prior to Wilson’s request that the American congress declare war on Germany.

It seems that a sine qua non for revisionism to gain acceptance is “a more calm political atmosphere.” While there is little doubt that Barnes anticipated a similar calming of emotions following the Second World War as he experienced following the First, such calm never truly came.

Revisionism, when applied to the First World War, showed that the actual causes and merits of that conflict were very close to the reverse of the picture presented in the political propaganda and historical writings of the war decade. Revisionism would also produce similar results with respect to the Second World War if it were allowed to develop unimpeded. But a determined effort is being made to stifle or silence revelations which would establish the truth with regard to the causes and issues of the late world conflict.[3]

While Barnes witnessed a media and academic “blackout” when it came to articles and books that challenged the official version of World War II history, from the vantage point of 2015, it is clear that the 1950s and 1960s were a less-politically charged time. A significant body of World War II revisionism was published during this time, and several such volumes including A.J.P. Taylor’s The Origins of the Second World War (1961) were widely reviewed and discussed.

During Barnes’s lifetime the conception of war changed from “regulated war” to total war. In his study of Carl Schmitt[4], Alain de Benoist explains the principle of “regulated war:”

Carl Schmitt says that [regulated war] is a war where the belligerents respect each other at war as enemies and do not treat one another as criminals, so that a peace treaty becomes possible and even remains the normal, mutually accepted end of war. War conducted according to the old law of nations follows rules governing, for example, the conduct of troops towards prisoners and civilians, the respect for neutral parties, the immunity of ambassadors, the rules of surrendering a stronghold, and the modalities of concluding a peace treaty. It almost never aims at overthrowing a sovereign or changing the government of a country, and is usually fought simply to achieve territorial objectives.[5]

In contrast to “regulated war” is “total war,” which does not recognize any limitations. The “total war” is a type of “holy war” conducted against the enemies of God.[6] De Benoist comments, “the theory of the just war introduces a discriminatory conception of war: if there are just wars, there are also unjust wars. But it also divides humanity into two categories: against the ‘infidels’ and the ‘barbarians’ everything is permitted.”[7]

Citing Schmitt’s Die Wendung zum diskriminierenden Kriegsbegriff (The Turn toward the Discriminatory Conception of War), de Benoist identifies the era of the “modern just war” beginning with the Treaty of Versailles and the Allies’ desire to bring Kaiser Wilhelm II to justice for having started the conflagration. 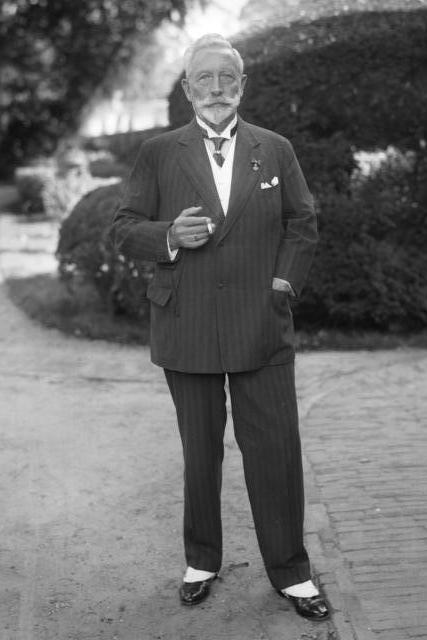 In today's political atmosphere, would the Kaiser have hanged?

In the new conception of war it becomes “a battle between the forces of good and the forces of evil, between those who arrogate to themselves the right to judge and those who end up in the dock.”[8] The Second World War then becomes the first in which the enemy becomes “criminal.” De Benoist notes, “to say that the enemy is a criminal is a way of denying him all political claims, thus disqualifying him politically. The criminal cannot claim an opinion or an idea whose degree of truth or falsehood it may be necessary to evaluate; he is an intrinsically destructive being.”[9]

While declared a criminal, Kaiser Wilhelm escaped this new “justice” by going into exile in the Netherlands, where Queen Wilhelmina and the Dutch government protected him from extradition.[10] King George V however called Wilhelm “the greatest criminal in history” and British Prime Minister David Lloyd George proposed that the Allies “hang the Kaiser.”[11] By the close of the Second World War, exile was not a choice for the German leadership. The Allies set up a series of trials beginning with the International Military Tribunal at Nuremberg with the specific intent of punishing enemy “criminals.”

Today in various countries in Europe it is not only illegal to question the official narrative of the Holocaust but also even to express doubt about aspects of the Nuremberg trials. The media even rage about collectors of Nazi-era art[12] and military memorabilia. The Austrian government sentenced one such collector to 10 months’ imprisonment for having just such a collection.[13]

In today’s political atmosphere, a simplistic “politically correct” view defines the entirety of the Second World War as a war against “racism.” The super-charged topic of race reduces consideration of aspects of World War II into a simplistic caricature of history. While Hollywood seems to blur the line between “good” and “evil” in many popular films, the portrayal of the Nazi is practically always relegated to the cartoon-villain level.[14]

Recently the “holy war” against “racism” was expanded to target the display and sale of Confederate flags following the Dylann Roof church shooting.[15] The “holy war” against the Confederacy is really a Twenty-First-Century phenomenon. The South’s leaders were not viewed as forces of evil, not even in the victorious North. In fact, following General Robert E. Lee’s surrender he was allowed to return to Richmond where he assumed the presidency of Washington College (now Washington and Lee University.) Even the Confederacy’s President Jefferson Davis faced fairly lenient terms when considered in light of today’s politically charged atmosphere. While he did serve two years’ imprisonment, Davis was released on $100,000 bail. Three years following the end of the war President Johnson released Davis from all liability through a presidential amnesty issued on December 25, 1868.

The recent “holy war” against symbols of the Confederacy resulted in various commentators complaining about the sale of other symbols of other defeated enemy regimes. Many critics asked, “Why are outlets such as Amazon and eBay still selling items with Nazi symbols?”[16] Few if any commentators bothered to mention the sale of t-shirts emblazoned with the image of Che Guevera, or other items with the image of Vladimir Lenin, Joseph Stalin, or Karl Marx.

In our hyper-charged political atmosphere, various symbols have become the objects of hate. The charge of “racism” is typically all that is needed to brand an individual, a website, or a symbol with such enemy-status. In the name of tolerance and freedom, politicians and businessmen have sought out the indefensible and prohibited sale and marched in lock step to obliterate aspects of our history—and theirs. There can be no defense for those on the “wrong side of history.” Only destructive beings, barely human, can attempt to defend the indefensible. As the causes were evil, so are those who are more interested in the facts than the rhetoric.

Harry Elmer Barnes was right when he declared that a “more calm political atmosphere” would be needed for a proper revision of the historical record. He failed to see however that wars would become holy conflicts fought against the forces of evil. Who for a minute thinks that Kaiser Wilhelm, Robert E. Lee, and Jefferson Davis wouldn’t have been executed for their “crimes” in Twenty-First-Century America?

How much longer can it be before the propaganda-maddened crowd calls for a similar fate for revisionist historians and writers?