A Connoisseur of Conquerors

In 1940, the widow Marie-Louise Osmont owned and lived in a manoir in Périers-sur-le-Dan in Normandy, France, and experienced the invasion and occupation by Germany’s Wehrmacht up-close and personally:  troops encamped on her grounds and officers were bivouacked in her house with her. This all happened to her without any shooting.

The way out of these circumstances, unfortunately, involved huge amounts of shooting, and bombing, destruction, terror and death. Not only was Périers-sur-le-Dan a mere three miles inland from Sword Beach of the D-Day invasion, but it was a mere five miles north of Caen, arguably the most-heavily bombed and fought-over city west of Germany in World War II. If Marie-Louise Osmont’s estate wasn’t in the center of the cauldron of France’s 1944 “liberation,” it was in the center of the fire beneath the cauldron. Miraculously, Mme. Osmont and her house not only survived, but a diary she kept from August 6, 1940 to August 17, 1944 also survived to the present day in the form of this book, whose English translation is here reviewed.

This virtually unique and precious document is characterized by no less a luminary than John Keegan, OBE, who wrote its introduction after having become possibly the foremost among all military historians—at least of those writing in English. He wrote, “What would we give for a similar diary by a countrywoman whose house stood on the front line between Union and Confederacy outside Richmond in 1864, a German diary of the battle of Berlin, a Russian diary from Stalingrad, a British diary from the Indian mutiny?” Atop Mme. Osmont’s incredibly fortuitous location in her time, we have the benefits of her insight, her sympathy, her freedom from cant or partisanship and finally, the skill and assiduity of her translator. The perspective afforded by the scant 113 pages of this book exceeds what a hundred volumes in the average specialist library might yield. 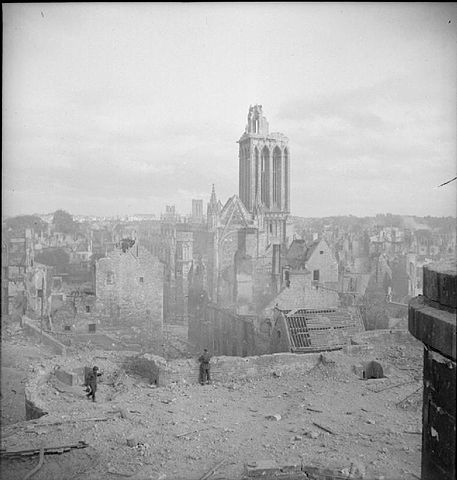 The account opens with the report of the arrival of six German soldiers assigned to live in Mme. Osmont’s admittedly underpopulated chateau. It is at this point that the invasion and occupation of the author’s country, for whose army she drove an ambulance during World War I, is redoubled severalfold by the invasion of her house by six foreigners whose good breeding and consideration for her property and her presumable sentiments she is nonetheless unable to deny. Thus began an ordeal for the mistress of the manoir whose conclusion so exceeded its long preamble in devastation and danger that it is hard to imagine that she might not have opted for its eternal continuation in preference to its catastrophic termination.

She would not, of course, have wished any such thing for the sake of her gentle invaders, though her reaction to her (also foreign) liberators leaves the reader with the feeling that, all things considered, she actually preferred the German invaders to the British liberators, one by each, as individuals. The numerous comparisons she makes during and after liberation are, for me, the most-fascinating part of the account; accounts of the fighting for Normandy abound, from winners, losers and civilian bystanders alike, including accounts whose literary and historical value match that of this little widow’s diary. Rather than the momentous, the spectacular, the history-making, this account derives even greater value from its scrupulous recording of the everyday—the everyday of the conquerors, of the liberators, and of those in and around whose ancestral homes it all happens.

Some of the differences between the members of the opposing armies besides their national origins would seem obviously to arise from their differing circumstances upon arrival at Chateau de Périers. The Germans, while possibly veterans of combat, had experienced their combat far away, long ago, or both by the time of their appearance in the pages of Mme. Osmont’s diary. Until D-Day, their sojourn at her premises was one of respite and welcome peace, even while the situation of their country and their families back home grew ever more-precarious. The British, with their own homeland recently freed of the threats of bombing and invasion from Germany, had fought their way all the way from the beaches to the Osmonts’ land, and faced continued fighting just up the road in the direction they were headed. They were for the most part brief visitors under violent circumstances, and they knew their stay would be short even as they and their hostess endured bombing and artillery barrages from the retreating Germans.

Other rather stark differences between the opposing occupiers may in part have arisen from these circumstantial differences. Especially with the passage of time, she observed a growing war-weariness in her German guests that was notably absent among the more-cheerful British contingents that came in their wake. This seemed especially evident in their singing. The Germans, who sang somewhat less often than their successors, sang wistful, even sad songs of their distant homeland and other such themes, and sang them in exquisite harmonies that qualified them as genuine music. The British seemed to sing more-spontaneously, with great ribaldry, louder, and with little to none of the nuance that characterizes actual melody. The British also seemed far more-larcenous, but that could very well have arisen from their awareness of their brief tenure there. Finally, they seemed little wearied by war; possibly many were innocent of combat prior to their arrival on the beaches of Normandy. As for veterans of Dunkirk, Greece, Crete, North Africa and such, one can only speculate if in fact they were less wearied by the most-wearisome experiences one might hope never to experience. Finally, the author charitably notes that the Germans, for all the vaunted superiority of their equipment, were execrable drivers, continually running over and knocking down structures of every description on the estate with their vehicles. But those British, as though driving on the left side of the road had better prepared them, drove “smoothly and precisely” in comparison to their Teutonic foes.

The author’s accounts of mayhem on her neighbors and the livestock that lived with them were especially piteous as were, of course, her accounts of woundings and deaths among the soldiers of both sides. She likewise had many friends and relatives who lived in nearby Caen, where civilian casualties of the Allied bombing may have exceeded the civilian casualties from any other single place west of Germany. As the fighting on her side of Caen settled down to a murderous rhythm, she found her stables converted to a field hospital in which she, together with Allied medical personnel, took up the burden of caring for the wounded of both contending armies. In fact, in the invidious aftermath of these events, she found herself charged with collaboration for the courtesies and care she extended to those on the losing side of the war; she dispatched these with comparative ease.

Her account closes with a hideously dispiriting daytrip to ravaged Caen, which she had known well. Controversy regarding the necessity and even effect of the devastating Allied bombing raids on several cities of occupied France rages on to this day, as does a gruesome contest for primacy between two civilian-casualty figures. The deaths in Britain laid to German bombing of that country during World War II are reckoned in the neighborhood of 60,000 to 70,000. The deaths in France laid to Allied bombing of that country only a couple of years later also lie squarely in that range. The inconsequential question of which number is greater invariably resolved in favor of the devotional proclivities of whoever is making the comparison. But the comparison itself renders the answer moot, while a related question yields a seven-to-one ratio: that of the tonnages of bombs dropped by the Germans on Britain (75,000, including the V rockets) and by the Allies on France (518,000).

The lessons of war come to us but faintly, from old veterans with failing memories, from politicians fulminating on matters of national pride, from acre upon acre of headstones, and charred remnants of photographs and documents stiff with age and riddled with fakery.

For ourselves and our progeny, let us all and each of us attend with renewed perspicacity to the thankless task of winnowing from all this chaff, the most-vital truths that might be ours to gain.