A Debatable Holocaust (with Jewish Victims, But No Germans?)

Croatia does not as yet, to my knowledge, have a law against “Holocaust denial.” Maybe they don’t even have laws against disfavored speech, but that would be rather much to imagine for any national government over the past … forever, actually.

Much of the Holocaust happened (yes, “it” did “happen”) in places that today are in Poland, and Poland has enacted, first, a law against Holocaust Denial (I’m dispensing with the scare quotes hereinafter), perhaps attendant to its admission to the European Union, and more-recently, a law criminalizing the utterance of such phrases as “Polish death camp,” with reference to installations during World War II during German occupation whose purposes are said to have included the extermination of disfavored groups, Jews foremost among these. This kind of stuff tends to accumulate, once it gets started …

And now, there’s Croatia, a place also occupied by those Germans during World War Two, who there adopted a somewhat different contrivance for occupation in the form of a “puppet” regime rather like that erected in Slovakia and other places that were in fact countries before the First World War. And, as is to be expected under conditions of what now is called “regime change,” at least one holding facility for actual or suspected opponents of the new regime was established in Croatia and, as is to be expected in such circumstances, allegations (many of them likely close to the truth) have arisen as to the cruel and arbitrary fates therein meted out to at least some of the unfortunate inmates, somewhat to be compared with allegations long-since made, with great authority and great frequency, as to the fates of people sent to actual “Nazi” concentration camps during World War II. 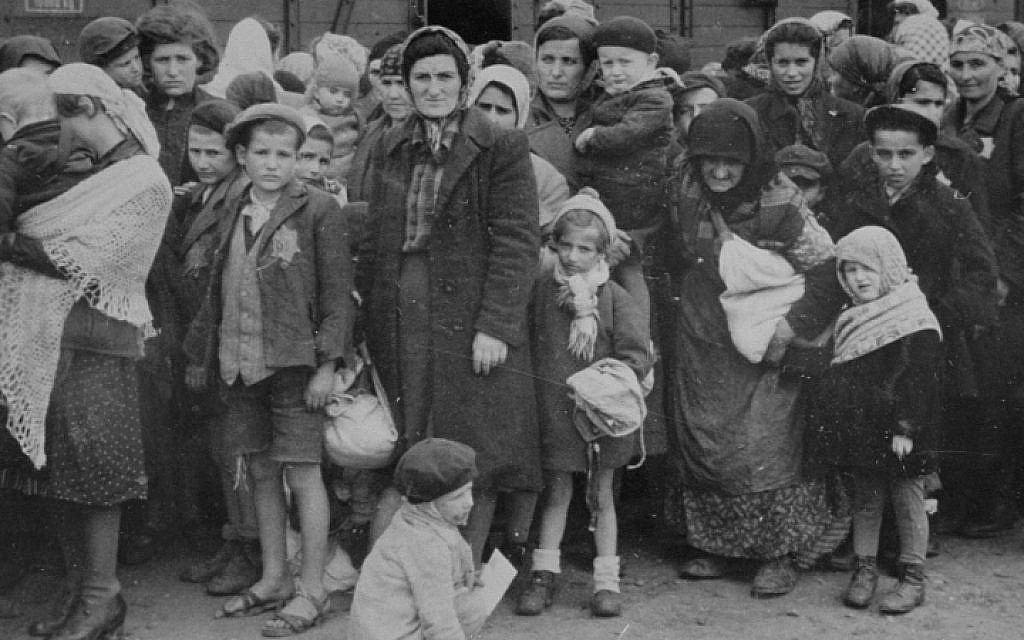 This miniature Holocaust would seem to have occurred at a place in Puppet Croatia (which encompassed a larger area than the so-named country of today) called Jasenovac, in which the German-installed regime, called Ustasha, confined people it feared might disrupt its control of its territory and the people in it. Perhaps Ustasha targeted the (all) Jews in Croatia as such, or perhaps many Jews in Croatia objected to being subject to a regime they regarded as fascist, if not outright Nazi, and were incarcerated for doing so. Either way, many Jews ended up in Jasenovac, and even greater numbers, it appears, of Serbians (about 16 percent of the victims were Jews, according to this article). And many of these died, or were killed by any number of means not including gas chambers, in which, by that time, Germans were apparently the world leaders in the design, installation and operation thereof. Others who might today be said to have died, or been killed, escaped, were released (yes, there were releases, just as at Auschwitz), or were released by Tito’s communists.

But there is a register at Jasenovac, similar to the one at Yad Vashem in Israel at which anyone (this is like Wikipedia) can enter the name(s) and other particulars of people they say died, or were killed, at Jasenovac, and these number about 83,000. The great majority of these seem to be Serbs, with Jews taking the second place by number in the list of victims, some 13,000 of them. These numbers seem to be insignificant in the context of the plenary Holocaust, but Croatia itself is fairly insignificant in the global scheme of things, and in this analysis, I hope to illuminate some of the dynamics that are to be seen in this possibly unique context of a debatable Holocaust. The Holocaust is not debatable anywhere in Western Europe, with the possible exception of Denmark. It is a crime to question any particular of an ill-defined authorized narrative of the Holocaust in all the other countries. Many have been prosecuted, convicted, sentenced, and jailed for this crime, including most-recently Ursula Haverbeck of Germany.

But it isn’t prohibited in Croatia, and the alleged absence of German participation[1] in the management of the camp little reduces the usefulness of this “natural experiment” in the dynamics of actual debate of the events and culpabilities of a Holocaust free, at least, of the stultifying effects of laws criminalizing Holocaust Denial. So, the debate rages on. Or, it doesn’t. Today’s Croatian “regime,” not unlike those of, say, Hungary, or even Austria, would seem rather to favor a narrative entailing fewer deaths, fewer killings, fewer gas chambers—no, wait, that’s Auschwitz. We mustn’t mix these things up. No gas chambers at Jasenovac, at least in what I have seen, nor any other specification of the manner of killing, though perhaps bullets are to be assumed.

Maybe the debate isn’t quite “actual.” Maybe it isn’t “fair.” Maybe the regime is muscling in on this matter and arranging outcomes different from … what? What most people think? Most people might not even think about this thing anymore. Most people alive today, even in Croatia, know little about these things, and much of what they do know is fragmentary, or even wrong.

But certain people, who aren’t even Croatians, do care about these things, and have raised their voices, not only in Croatian, but in English, and perhaps Hebrew as well. Menachem Rosensaft, general counsel of the World Jewish Congress, even went so far as to say, “The figures of the numbers of victims shouldn’t be a subject of political debate between Croats, Serbs and Jews, but should be established by independent internationally known historians and scholars, whether from the US Holocaust Memorial Museum in Washington or from Yad Vashem …” Independent historians and scholars from the USHMM or Yad Vashem? Is someone talking from both sides of his mouth, here? His further remarks suggest the inclusion of parties having other interests, inviting them to join in a shouting match with some of the loudest, best-funded shouters the world has ever known.

Independent or not, “the figures of the numbers of victims” can’t be established by anyone, historian, scholar, or even witness or perpetrator at the end of the day. Who was counting then? The Germans were counting in their concentration camps at the same time, but those so-Germanly painstaking counts are dismissed, at least by certain influential partisans, as incomplete and/or fraudulent on any number of accounts. Even counts made by the International Red Cross at the same time or shortly after receive the same treatment. The Croatians were that much less-assiduous, not that it would have helped anything had they been as good as the Germans, or even better. Who will count now? And what will they count?

These matters will be contended, at least after initial accusations and claims have been made, if only out of self-defense on the part of parties identifying or identifiable with the allegedly guilty. “Independent” conclusions will still be contested, for ever and aye, likely by victims and perpetrators alike in alignment with the interests (or predilections) of each side.

In recent decades, the side of this contretemps represented by the World Jewish Congress has grown unaccustomed to facing opposition at the sovereign level, as it is now also doing in Hungary, Poland, and some other smaller eastern-European sovereignties. In terms of number of laws governing the matter, Poland of late has taken the lead, although outside Europe, Israel has quite naturally been the most-expansive, having enacted laws that criminalize Holocaust Denial anywhere and everywhere in the world.

Elsewhere, the jackboot has been firmly emplaced on the other foot, starting possibly in France with the Gayssot Law criminalizing Holocaust Denial, and spreading from there to currently at least 18 other countries, all in Europe. Elsewhere, the matter is usually dealt with to the satisfaction of Holocaust Affirmers by way of “hate speech” prohibitions.

And this illuminates how, in Croatia and elsewhere, such matters are, at least for the moment, “settled” at least to the extent of stifling/suppressing/discouraging further discussion of the troubling matter: force. That’s how it’s done, everywhere and always, not only in Croatia, but in Israel, Poland, Germany, Switzerland, Austria, and on and on and on. We shall have “peace,” or we may have open debate, but we can’t have both.

The United States stands out for having, seemingly, opted for a semblance of freedom, if not of open debate, and is often scored by parties of every stripe for allowing or being beset by discord and strife of a most-unseemly degree and kind. In a word, it is ugly, as strife always is. There, of course, Holocaust affirmers complain of laxity in the suppression of “false history” and “hate speech,” while the opposing camp complains of non-governmental censorship taking the form of closed Facebook accounts, barred YouTube uploads, manipulation of the returns of Google queries, denial of credit-card and PayPal merchant accounts and even mass delistings of books from Amazon.com’s global bookstore.

And this matter of Amazon delistings brings us around full-circle to the employer of one Menachem Rosensaft, he who would “urge debate” among parties interested in the approved history of Croatia. It was only in March of last year that the World Jewish Congress, together with the “independent” Yad Vashem Holocaust Memorial of Israel, succeeded in getting the entire canon of Holocaust revisionism scrubbed from the lists of Amazon’s offerings.

Thus arose, in fashion first reported by George Orwell in 1984 as “unperson-ing,” over 155 “unbooks” reaching all the way back to 1976’s blockbuster by Arthur Butz The Hoax of the Twentieth Century, fearlessly carried by Amazon for virtually its entire existence up until then. Winston Smith’s “memory hole” of 1984 has nothing on Amazon’s delistings, which extend not only to e-books, but even to the offering of used copies by third parties. This would seem to be the WJC’s, if not Menachem Rosensaft’s, idea of debate: shut it down—scrub it. Make it unavailable. In fact, obliterate all evidence that it/they ever existed.

Force. That’s all that ever “settles” any of this.

Freedom, on the other hand, leaves it all unsettled, forever.

[1] Lawyer Rosensaft, donning his historian’s hat, is quoted as having sa id, “The crimes at Jasenovac were committed by the [Ustasha] alone, and not directed or enforced by the Germans.” The title of the article, “World Jewish Congress Urges Croatia to Debate Holocaust” is well worth quoting in its own right. “Debate” in the WJC’s definition might greatly resemble Israel’s definition of “peace” in its own part of the Middle East, very much including the West Bank.