A Footnote of Irony

A few weeks ago I met Dietmar Munier in Chicago, owner of the medium-sized publishing company Arndt in Kiel, northern Germany. He was hunting original color photographs of the Third Reich era for his many upcoming book projects, and while visiting archives in the United States, he decided to stop by and meet me so that we could discuss several future book publishing projects. Since Munier published several very interesting and important books on the history of the Second World War in particular as well as the years preceding, I hope to be able to publish English language editions of some of these books shortly. 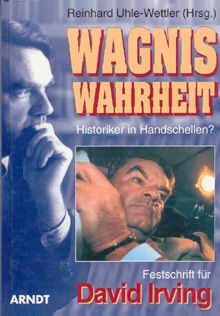 One series of some five books addresses several aspects of the German-Russian war between 1941-1945. Another series features a collection of great color photos of various theaters of the Second World War; yet another series contains heavily illustrated books focusing on peacetime Germany before the war. As you can imagine, publishing such a large number of fine books requires some financial backing, which is why things may progress only slowly initially. But with a little luck, I may acquire an investor willing to put his money where his mouth is, so that these fine books can be offered to the English-speaking world soon.

During dinner, Herr Munier casually talked about various of his past, present, and future projects. While so doing, he touched briefly upon a project he had carried out several years ago: a Festschrift on the occasion of David Irving’s 60th birthday. Subtitled Historians in Handcuffs (see illustration) and recounting David Irving’s own painful experience, this 1998 book included contributions from a long list of highly renowned German scholars. One personality, however, whose article was originally planned to be included as well, was finally not represented: Ralf Hochhuth, author of the (in)famous play Der Stellvertreter (The Deputy). In this play, Hochhuth had turned the so-called confessions of Kurt Gerstein about his alleged activities at the purported extermination camp Belzec into a worldwide theater success, popularizing one of the most outrageous pieces of evidentiary nonsense on the ‘Holocaust.’

The reason Hochhuth’s article was not printed was that it contained many statements about Irving that were closer to unfounded ad hominem attacks than to the kind of statements one would expect in a Festschrift. One of Hochhuth’s statements about Irving piqued the publisher’s interest most intensely, and that was his claim that Irving’s mother was Jewish. Herr Munier inquired about this in disbelief, but David Irving happily confirmed it: yes, his mother was Jewish, but he was never interested in this fact, nor was he raised within the Jewish tradition. He therefore never considered it to have any relevance. Thus, according to orthodox Jewish tradition, David Irving is a Jew, plain and simple.

The interesting questions arising from this are: Why did Ralf Hochhuth want to blow the whistle on Irving in this regard? Had he an interest in undermining Irving’s financial basis by hoping to cut him off from some of his supporters who are anti-Semitic to the point where they would reject Irving because of this? And why was this fact never mentioned by anybody? Why was it not raised during Irving’s libel case against Lipstadt? I bet all sides knew that an atheist Jew (Irving) was fighting against orthodox Jews (Lipstadt, van Pelt, and others). It was, and continues to be, a case of Jewish in-fighting, if you wish to label it that way.

Of course, Holocaust promoters can have no interest in advertising that the "main exponent" of "Holocaust Denial" is a Jew. Oy vey, what a publicity disaster that would be! (Even though Irving is, strictly seen, not even a Holocaust revisionist, but merely a benevolent observer.)

At the end of the day, one can argue that it doesn’t matter what heritage Irving’s mother had, at least not in regard to where the historical truth is to be found. But for many individuals it might make a difference in their personal attitude toward revisionism.

For me personally, this is only an interesting, curious, ironic footnote, the most interesting aspect being the reactions of others to this revelation.

[P.S.: in an email exchange resulting from this editorial, David Irving has vigorously denied that his mother was Jewish; G.R.]

Wasn’t there a revisionist conference to be held in Sacramento, CA, at the end of April this year? Well, most of our readers may have heard and read about this conference, and many may also have heard what happened to it: due to pressure from various groups, the Sacramento Turnverein cancelled the contract for the hall where the meeting was supposed to take place. By that time, just five days before the conference, the organizer had cancelled the contract for a backup location, thinking everything would be all right. Representatives of the Jewish Defense League proudly proclaimed that this defeat of freedom of speech was their achievement. Be that as it may, what followed after the cancellation was a not so nice fight over whether or not to hold a spontaneous meeting elsewhere, who should be responsible for it, and who should be allowed to speak. The cancellation itself was unpleasant enough for everybody who had planned to attend, but the fighting over the carcass was even more ugly. I am therefore seriously considering organizing a meeting here in the Chicago area toward the end of this season – or maybe next year. Time will tell. This is not a priority right now.

At any rate, my reason for delaying this issue of TR in order to be able to report on this conference is now obsolete, and there is nothing further to report about that would be of real substance. □