"A form of collective insanity is now sweeping Germany"

Germar Rudolf, the "mystery speaker" who was scheduled to address the Twelfth annual Institute for Historical Review Revisionist Conference, (Sept. 3-5, 1994), explained why he was regrettably not able to attend in the following statement, which was read to the Conference by Master of Ceremonies Greg Raven:

Usually the whole audience is eager to learn who the mystery speaker will be. This time, unfortunately, the IHR must deny you the satisfaction of seeing this mystery solved in person. For reasons that are, regrettably, not very mysterious, I am not able to appear for this Conference. I want to tell you the reasons for this, but to maintain some air of mystery, I will withhold my name for the time being. As I tell the story, perhaps one or more of you will sooner or later guess my identity.

I don't need to explain to you that Holocaust revisionists are subject to social ostracism, and in some countries even to criminal prosecution. Therefore, I do not need to go into the details of my own story, which is not so very different from that of others.

It began with my dismissal, without notice, from my position at the Max Planck Institute. Then came the refusal by the University of Stuttgart to allow me, at the completion of my studies, to stand for my doctoral examinations. After this came the first police search of my home, which involved seizing my computer, all my papers, my correspondence, and so forth, leading to my criminal indictment on a charge of "incitement of race hatred." Just two weeks ago police from the prosecution attorney's office again showed up at my door, confiscating my new computer, the printer, my address file, my calendar and planner, and much more.

The town I live in, not to be outdone, sent an official representative to my landlord to open his eyes to what an "evil" person he had been renting an apartment to. He was so intimidated that just recently, with all sorts of great regrets and numerous excuses, he threw us out – a happy event for both me and my wife in her ninth month of pregnancy. And all this happening under the cloud of a press campaign of lies against me that has gone on since this spring.

But I am not one to complain, because I knew in advance what would await me – and I would do it all over again. After all, a German revisionist is not considered reliable and trustworthy unless he has undergone at least one house search! And whoever has not come before a German court at least once must be suspected of being an agent of the German "state security" counterpart of the old East Berlin Stasi [secret police]. 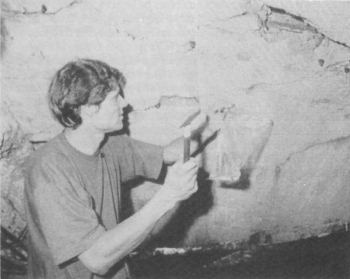 Germar Rudolf at Auschwitz-Birkenau, taking samples from the ruins of the mortuary cellar room (the supposed "gas chamber") of Crematory II.

Such blows of fate are worn like medals on the chest by German revisionists. Nevertheless, the most recent blows against me by our self-styled "government of justice" prevent me, for numerous reasons, from joining you, as I had wished to report to you on the work that has been going on in Europe in recent years. The publication of a written account of all our battles has also been greatly delayed by the same interference. I am certain, though, that Messrs. Graf, Mattogno and Faurisson will be able to give a sense of our activities, which I would like to merely sketch out for you now.

If the district prosecuting attorney does not foul our plans again, an anthology will appear this year in Germany, a detailed study by a team of 13 authors of the most important aspects of the Holocaust story. In addition to an investigation of the purported gas chamber witnesses of Auschwitz, it will contain several legal studies, including critical examinations of Holocaust trials, among them one against an alleged perpetrator (Weise) and a "denier" (Lüftl). This anthology will also deal with the problem of statistics, through a comparison of two already-existing works (by Benz and Sanning). Also in this work will be critical treatments of documents, including the Wannsee Protocol, documents on "diesel gas wagons" and purported photo documentation. The technical portion of this anthology will include an analysis of aerial reconnaissance photos, the chemistry and architecture of a working gas chamber, a thermo-technical study of the claims of mass cremation, and analyses of the alleged diesel gassings and the purported mass burnings in the Treblinka camp. This detailed collective work will conclude with a look at the Babi Yar case, which involves many aspects of the work cited above.

But something is missing in this study. All our work up until now has aimed to show that things were not as portrayed. It was, in effect, "destructive" research. What we will need in the future is less carping about traditionalist portrayals of history, and much more work toward a holistic alternative. Our challenge must be to write a comprehensive history of the persecution of the Jews in the area ruled by the Third Reich: one that says not merely what did not happen, but above all tells what really did happen.

I do not know whether I will be able to tackle this very ambitious task in the near future, or even to coordinate it. Since the recent ominous conviction of Guenter Deckert, chairman of the right-wing NPD party in Germany, it has become obvious to everyone that the German justice system is no longer truly independent [of political pressure]. A judge now knows that handing down a mild sentence against a revisionist means that he may be removed from the bench and socially ostracized. Germany's most respected daily newspaper, the Frankfurter Allgemeine, regards "incitement to ethnic hatred" as a much worse transgression when it occurs in an academic, scholarly guise. Our entire media and all our politicians sing a rare choral song of agreement that the Holocaust is in effect the foundation stone of the Federal Republic of Germany.

A form of collective insanity is now sweeping the country. It seems as if pyres and stakes are being set to fire, this time to burn Holocaust revisionists. I don't know where all this will end, but I do know this: the truth may go under, but it cannot drown. In this spirit, I wish you all a pleasant and instructive time at this conference.

Germar Rudolf's problems began in 1993 following the publication of this chemical-technical report about the supposed mass killing "gas chambers" at Auschwitz, and especially Auschwitz-Birkenau. He wrote this detailed report on the basis of an on-site investigation, chemical analyses of samples, and meticulous research.

"For chemical-physical reasons, the claimed mass gassings with hydrocyanic acid in the alleged "gas chambers" in Auschwitz did not take place" he concluded. "The supposed facilities for mass killing in Auschwitz and Birkenau were not suitable for this purpose." The "Rudolf Report" corroborates and strengthens the findings of earlier forensic investigations of purported Auschwitz "gas chambers," including the one by American gas chamber expert Fred Leuchter.

At the time he wrote this report, Rudolf- a certified chemist- was working at the renowned Max Planck research center in Stuttgart, and was a doctoral candidate at the University of Stuttgart. The "Rudolf Report" was published in 1993 in a handsome, 110-page, magazine-size glossy paper edition, with numerous photographs, charts, diagrams, and more than 200 reference notes. The Rudolf Report is available from: ... [Editor's Note: An updated and expanded English translation (ca. 460 pp., including a biographic section) is available at Amazon and at the CHP & CODOH online book store, as well as at The Barnes Review online bookstore.]