A German Takes His Life to Protest Defamation and Historical Lies

At about eight o'clock in the evening of Tuesday, April 25, 1995, a retired German chemist walked to a prominent memorial hall in downtown Munich, poured a flammable liquid over himself, and set himself on fire. Reinhold Elstner, 75 years old, took his life in this gruesome, painful fashion to protest against a half century of "defamation" and a "Niagara flood of lies pouring down on our nation."

During the Second World War Elstner served as a Wehrmacht soldier on the eastern front. For several years after the war he was held in the Soviet Union as a forced laborer. Along with three million other Sudeten Germans, his family was driven from its ancient home in the Sudetenland region that is now part of the Czech Republic.

Elstner was no political fanatic or muddle-headed fool. He suffered neither from loneliness nor incurable illness. After his return home from Soviet camps he led a normal, ordered life. He studied in Munich, married, and, together with his wife (who died a few years ago), raised a son. As a certified chemist, he did not suffer materially.

Colleagues and neighbors all appreciated this sprightly pensioner, who was always ready with a friendly witticism and who, in spite of his critical view of certain contemporary developments, never seemed depressed.

German newspapers predictably gave only minimal coverage to Elstner's self-immolation, and sought dismissively to smear him as a foolish "right wing radical." Nevertheless, many people quietly responded to this dramatic act of protest with understanding and sympathy.

For days afterwards, Germans visited the site to pay their respects, many laying flowers at the spot at the Feldherrnhalle memorial where Elstner took his life. One evening a few days after his death, Munich police gathered up 15-20 bunches of flowers from the site and threw them, like garbage, into a container they had brought along. Another police team repeated the action a few days later, and city employees used a blow torch to remove all traces of the self-immolation from the pavement. Four days after the death, police were stopping people who had come to the site to lay flowers, demanding their names and addresses. 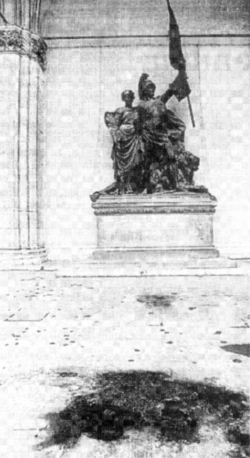 To protest against the "flood of lies pouring down on our nation," retired chemist Reinhold Elstner committed suicide by setting himself on fire here at the "Feldherrnhalle" memorial hall in downtown Munich, southern Germany.

As macabre as it sounds, if Elstner had survived his self-immolation, very likely he would have been arrested and put on trial as a criminal because he had expressed politically incorrect views about the Holocaust story in a farewell letter. (To deny, whitewash or approve of genocidal acts of the Third Reich is a crime in today's Germany.) For example, he rejected as "lies, nothing but lies" the propaganda stories of gas chamber killings in Buchenwald, Mauthausen and Dachau "and the like."

Elstner's public suicide is not without precedent. In January 1969, a Czech student set himselfon fire in downtown Prague to protest Soviet occupation of his country. Jan Palach's suicide was widely regarded around the world as a commendable act of courage. It touched off mass anti-Soviet demonstrations in Bohemia-Moravia, culminating in a great funeral rally for Palach in Prague. A few weeks later, another Czech, Jan Zajic, committed suicide in the same manner.

In August 1976, a 47-year-old Protestant pastor in the former "German Democratic Republic" similarly took his life. Oskar Brüsewitz publicly set himself on fire in the center of his hometown to dramatically protest the repression of religion in the Communist regime. Protestant leaders throughout the country cited Pastor Brüsewitz's suicide as a courageous deed worthy of respect, solemnly declaring that it "demonstrated the tensions in our society and the tests which many have to undergo." Also in contrast to Elstner's death, Brüsewitz's suicide received widespread sympathy and prominent coverage in newspapers around the world.

In recent years German politicians, intellectuals, and journalists have gushed with sympathy for Third World immigrants in their country. If an asylum-seeker from Bangladesh or Nigeria had similarly taken his life, German opinion makers doubtless would have responded with an outpouring of hand-wringing sympathy and remorseful concern.

Elstner survived the Third Reich, the Second World War, and even Soviet imprisonment, but life in today's propaganda-saturated German Federal Republic – sometimes called "the most free state in German history" – was too much for him. "The ruling system with its intolerable hate campaign against the entire war generation drove Reinhold Elstner to his death," commented the organizer of a memorial service held two weeks after the death.

Fifty years of ceaseless defamation, ugly lies and demonization of an entire people are enough!

Fifty years of incredible insults to former German soldiers, of blackmail costing billions [in payments to Israel and world Jewry], and of "democratic" hate, are more than one can take.

Fifty years of trying to create rifts among generations of Germans by criminalizing fathers and grandfathers are too much.

Now 75 years old, there's not much more I can do. Through my death in flames as I can nevertheless still give a final visible expression of my views. If, as a result, even one German comes to his senses and finds the way to truth, then my sacrifice will not have been in vain.

When I realized that now, after 50 years, there seems little hope that reason would gain the upper hand, I felt I had no other choice ...

I am a Sudeten German. I had a Czech grandmother, and from that side other Czech and Jewish relatives, some of whom were incarcerated in concentration camps, such as Buchenwald (Nordhausen) and Theresienstadt.

I never belonged either to the Nazi party or even to any other group that was in the slightest tainted by an association with National Socialism. We always had the best of relations with our non-German kin, and, when necessary, we helped each other.

Our relatives who had been prisoners in the concentration camps came home on May 10, 1945 [two days after the end of hostilities], and offered their help. Of special assistance was the Jewish uncle from Prague who had seen the horrible blood bath in the Czech capital that Czech partisans had caused among the Germans left there.

During my years I met nice and helpful Jews, not only among my relatives but also as a PoW in Russia. In Gorki a female Jewish professor helped me back to health when I suffered from pleurisy and had severe eye problems.

I well remember the "Crystal Night" of 1938 because on that day I met a crying Jewish girl, a girl with whom I had been studying. But I was much more shocked when I saw in Russia how all churches had been desecrated, how they were used for stables and machine shops ... Yet for me the worst was when I saw churches used as museums for atheism ...

I lived for years in the hospital town of Porkhov, Russia, where already in the first winter the danger of a typhus epidemic arose, and all the hospitals and first-aid stations were deloused with what we called then "KZ [concentration camp] gas," namely, "Zyklon B." There I learned how dangerous it was to handle this poison gas ... At any rate, ever since then I have had no choice but to regard as fairy tales all concentration camp memoirs that describe the alleged "gas chambers." This may be the real reason why all concentration camp reports by "survivors" are decreed as true under a special "judicial notice," and need not be proven and cannot be challenged.

In the July-August 1995 Journal, the photograph on page 22 of Buchenwald Jewish children is from the National Archives (Washington, DC), and is published in The End of the Holocaust (Portland: 1990), by J. Bridgman. In this same Journal issue, the photograph on page 36 of victims of an Allied bombing raid on Berlin is from the book by T. Charman, The German Home Front, 1939-1945 (New York: 1989).