A Ghetto Fighter Recalls Her Capture 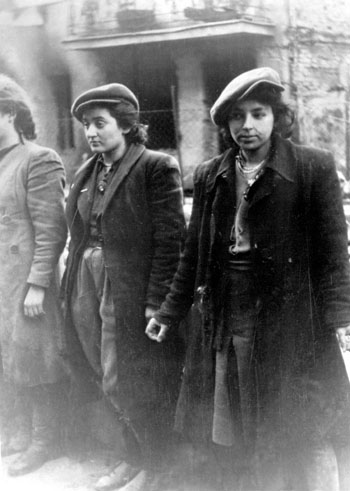 Young women fighters rounded up during the 1943 German action against the Warsaw ghetto are shown in this widely-reproduced photograph.

Like the famous “ghetto boy” photo, this was included in the 1943 “Stroop report.” The original caption read: “Women of the He-halutz movement, captured with weapons.” (“He-halutz” or “Hechalutz” [“pioneer”] was an important Zionist youth organization.)

The young woman at the right is Malka Zdorjewicz. Years later, she recalled the circumstance behind the taking of this photograph:

We went to a neutral place in the ghetto area and climbed down into the underground sewers. Through them, we girls used to carry arms into the ghetto; we hid them in our boots. During the ghetto uprising, we hurled Molotov cocktails at the Germans.

After the suppression of the uprising, we went into hiding, taking refuge in an underground shelter where a large quantity of arms was piled up. But the Germans detected us and forced us out. I happened to be there with Rachela and Bluma Wyszogrodzka (and that is how they took our picture) …

Rachela and I, together with the others, were driven to the Umschlagplatz. They later took us to Majdanek from there.

Surviving internment in the Majdanek camp, Malka moved to Palestine in 1946, where she married (taking her husband’s name of Hornstein), and had four children. In Jerusalem in July 1967, she recorded her wartime experiences. (Source: Yad Vashem Bulletin [Jerusalem], No. 22, May 1968, pp. 37–39.)