Partly for the bibliographic record, we have begun a preliminary list of some key Revisionist titles and papers spanning several subjects. Although it has been argued that revisionism is as old as history itself, here we will begin with the First World War. The first group of revisionists sought to revise the harsh Treaty of Versailles. That early generation of Revisionists led to subsequent generations who were skeptical of "official" stories, quick to identify propaganda, and determined that cutting through the lies of governments and "official" histories would not only lead to the truth, but ultimately to peace among nations.

In May of 1963, Harry Elmer Barnes wrote one of his most enduring essays, "Blasting the Historical Blackout."  Barnes essay was a reaction to the recent publication of The Origins of the Second World War by A.J.P. Taylor a trail-blazing revisionist work.  In his essay Barnes described what he meant by the "Historical Blackout."  He called the Historical Blackout, "the effort which has been made since the outbreak of the second World War to suppress the truth relative to the responsibility for this great conflict and the manner in which the United States entered the war.  This has involved ignoring or suppressing the facts which run counter to wartime propaganda when writing books on these subjects, and suppressing, ignoring, or seeking to discredit those books when have taken account of such facts."  Partly to honor the memory and the valiant work that Barnes performed to bring history into accord with the facts, we name this collection after his seminal phrase. 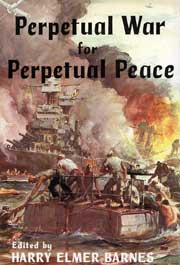