Contractors of Auschwitz Tried in Vienna
by Walter Lüftl
Published: 2004-08-01 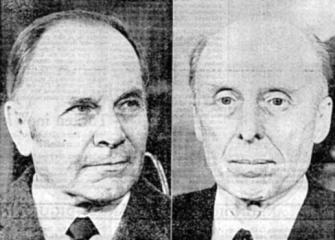 Walter Dejaco (left) and Fritz Ertl (right): The contractors of the crematoria of Auschwitz-Birkenau. Thanks to an expert report they were acquitted.

During the years 1964/65, a giant Auschwitz trial took place in Frankfurt, Germany. Almost all defendants accused of having participated in the crimes claimed to have been committed in this camp were eventually sentenced.[1] Even though the Frankfurt court dealt with one of the largest mass murders ever committed in mankind history – if one believes the charges – the judges of this trial did nothing to find out if the claims made by witnesses were based on facts; the court did not investigate the alleged murder weapons, did not try to find any trace of the dead or of its victims, and did not hear experts to critically assess the witnesses' claims. Not a single forensic expert report was asked for or provided.

The trial against Walter Dejaco and Fritz Ertl was a little different. It took place before the Superior Criminal Court in Vienna between January 1 and March 10, 1972, under the presiding judge Dr. Reisenleitner.[2] Both defendants were officers of the Waffen-SS during the war and as such were at times involved in the design, construction, and maintenance of the crematoria of the Auschwitz-Birkenau camp. Because according to today's official historiography these buildings served for the mass murder of European Jews, both were accused by the Austrian public prosecutor of having at least indirectly participated in the planning and execution of this crime.

The trial files are allegedly no longer accessible in the Vienna courthouse. However, a short review of this trial will be attempted, based on newspaper articles. Judging by these reports, this trial was in line with the other trials about actual or alleged violent NS-crimes regarding external circumstances as described by Köhler:[3]

"A construction drawing by Dejaco of both large gas chambers with his signature exists."

Plans of the Auschwitz-Birkenau camp were displayed in the courtroom, in which

"clearly the crematoria, the gas chambers, the barracks and the infamous ramp [...]"[5]

were allegedly drawn, although no plan has yet been found, on which the words "human gas chamber" are written or from which use as gas chambers could be indirectly construed.

Contrary to many other trials against so-called National Socialist violent crimes, the media's interest in these trials was relatively minor. Thus, the Vienna newspaper Die Presse evidently did not report about it, and the trial itself took place before a mostly empty court room.[12]

Several interesting statements by the press, the accused, the witnesses, and the court should be mentioned in addition:

This last piece of information is quite interesting, since it indicates that the revisionist allegation that criminal courts never use material evidence is false. At least in this trial a construction specialist was requested for his expertise. This construction expert who testified during that trial got in touch with the author of this article and informed him that he had explained more than just the identity of the original plans with the copies, which were in the public prosecutor's hands. He had to answer basically two questions put to him by the court:

Walter Dejaco and Fritz Ertl were thus acquitted. The public prosecution did announce an appeal,[20] but did not follow through with it. Despite protests no further measures against the two acquitted architects were taken. In the Vienna Auschwitz trial a well known construction specialist prepared an expert opinion. The material evidence did not indicate mass killings with poison gas.

Question: Is this the reason why the files of the trial described here cannot be found?