A Wise and Tolerant, Prominent Jew

There’s a ray of hopeful light coming today from London’s Telegraph newspaper: an article from columnist Stephen Pollard titled “Why I, Editor of the Jewish Chronicle, Think Anti-Semites Should Be Allowed on YouTube.” It’s a voice of reason coming from a quarter from which one would not expect to hear it (and one often hears the opposite) on an issue that explicitly encompasses Holocaust reform. There’s even a picture of the Holocaust Handbooks cover of Arthur Butz’s classic Hoax of the Twentieth Century in the article. 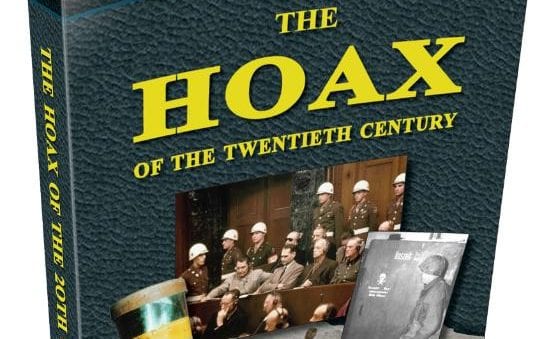 I ache to inform Mr. Pollard of last week’s clandestine delisting of all of CODOH’s books from Amazon.com’s Web site, but alas, I can find no e-mail address for him, neither with the Telegraph nor with the Jewish Chronicle. Maybe he knows about it; the matter would seem to dovetail very neatly with the subject of his present epistle. But the news blackout of Amazon’s outrageous affront to freedom of expression has been beyond Stygian: there is nothing to hear about it anywhere besides CODOH and the articles in Wikipedia on “Amazon.com Controversies” and “The Hoax of the Twentieth Century,” both edited by yours truly to this effect.

Meantime, the estimable Mr. Pollard has included a sentence in his present broadside that strikes me as eminently quotable, now and for as long as it would take for Mr. Pollard to become as ancient as Socrates is today:

… banning views simply because many, or even most, people find them abhorrent is a form of mob rule dressed up in civilised clothes.

Truly, that is a comment for the ages. I wish I could convey this thought, most-definitely with attribution, to Jeff Bezos at this time.

In the meantime, pass it on to anyone and everyone you can.