As CODOH’s $250K reward ad continues to multiply on campuses across America, the Anti-Defamation League—the ad’s chief target—has been forced to take public notice. Unable to block the ad’s placement at most colleges, ADL has marshaled its allies and surrogates in the Hillel Foundation and elsewhere to cajole or to pressure university administrators and faculty into censuring student journalists who have published the ad.

But attempts at intimidation through scolding, “sensitivity training,” and trips to the Holocaust museum in Washington are doing Holocaust revisionism on the American campus more benefit than harm: arousing sympathy for open-minded student editors, raising questions about the censors’ motives, and greatly increasing the impact of CODOH’s reward ad—thus publicizing the address of CODOH’s Website, the point of the current campus ad campaign. All that helps to explain why, in the week ending November 21 (the most recent statistics available), Internet visitors to CODOHWeb transferred a record 37,000 articles from our site to their personal computers.

The ADL’s inability to block more than a small fraction of CODOH’s ads, aimed no longer at simply the Holocaust cult, but now squarely at the ADL, resulted this October in a shrill and uncharacteristically frank appeal to its supporters. In a three-page long posting on its Website titled “The 1998-99 Bradley Smith Campus Newspaper Campaign,” America’s leading inhibitor of free speech urged its helpers to pressure campus journalists, “on an ongoing basis,” against publishing CODOH’s ads and op-eds.

As part of this pressure, ADL stresses: “Campus newspaper staffs need to be shown that the principled rejection of Holocaust denial propaganda is consistent with all recognized standards of academic freedom and interpretations of the First Amendment.” If that line of twaddle (and the unspecified arm twisting to accompany it) should fail, the ADL advises:

This ad and others like it should be denounced strongly where and when they appear. It is particularly important to encourage college and university presidents to follow the lead of many of their peers in taking a public position of moral leadership.

Soon enough, supine administrators were heeding ADL’s call to exercise “moral leadership.” At Marquette University, a private, Catholic institution, where our reward ad was published in the Marquette Tribune on September 29, all students involved in campus media were forced to attend a “Diversity Sensitivity Training” session administered by the dean of the College of Communications on October 9. The session was also attended by members of Marquette Hillel, which, as SR 42 revealed, maintains close liaison with ADL to combat Smith and CODOH’s campus outreach.

According to Tara McDermott, an editor of the Tribune, the Hillel contingent was nice enough to accept the student paper’s printed apology and its editors’ claim that the whole thing had been an unfortunate mistake. (The number of Jewish students at Marquette is about one percent.) But the compulsory indoctrination in Holocaust conformity and the student editors’ surrender wasn’t the last word on CODOH’s ad at Marquette.

The October 22 edition of the Tribune carried a forceful letter from Marquette law student Nathan Freeburg, who scornfully skewered the “diversity sensitivity” prattle. He wrote: “In the climate of a university where openness, diversity and a commitment to free thought are paramount, ideological restrictions should not be tolerated in the paper.”

Meanwhile, Hillel was laying down the law on Holocaust conformity elsewhere. On October 21, the Daily Kent Stater (Kent State University, Kent, Ohio), which ran CODOH’s reward ad on October 8, printed an imperious letter from Deborah Bobrow, director of the Hillel Student Center, in which she ripped the Stater for publishing the ad, decreeing that “The issue is not one of free speech. There is no 'freedom’ to publish hateful and spiteful speech in the Daily Kent Stater.”

Like the Hillel representatives at Marquette, Bobrow invoked “diversity” as the justification for censoring CODOH’s reward ad. “The Stater's printing of Mr. Smith’s advertisement is counterproductive to the principles of a community which respects and promotes diverse ethnic, racial, cultural and religious orientations.”

Bobrow’s letter was immediately followed by a similar rant from the Reverend Charles “Chuck” Graham, director of the United Christian Ministries; Graham recounted his fine work in staging interfaith trips to the U.S. Holocaust Memorial Museum in Washington, an institution that is playing a growing role in efforts to impose student allegiance to the Holocaust cult.

At Indiana University-South Bend, where controversy, on campus and off, over the running of the reward ad has been as sustained and intense as it’s been anywhere, university chancellor Kenneth Perrin hit on a good way to bring the offending editors of the IUSB Preface to heel: send them on an all-expenses-paid trip to the U.S. Holocaust Memorial Museum in Washington. That much trouble had to be taken because not only had the ad been published, but Preface editor Rebecca Ferguson had shown alarming spunk in response to the storm of criticism from Perrin and others. 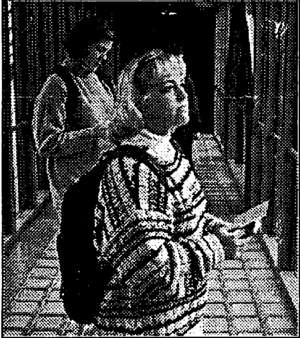 Indiana University South Bend students Erica Futa, left, and Colleen Hahn visit the Holocaust museum in Washington. IUSB sent three members of the student newspaper staff to the museum in response to a campus controversy over publication of an advertisement questioning whether the Holocaust occurred.

In a signed editorial in the Preface (November 4), she pointed out that the furor over the revisionist ad placed by Smith had brought CODOH coverage in the off-campus South Bend media, print and broadcast, including the showing of CODOH’s Web address on a television news show. Ferguson detailed the pressures and innuendoes directed at her from administrators and faculty members, then pointed out:

To date, I have received maybe one student complaint for every ten faculty complaints. This is not a student issue, it is a faculty issue.

Rebecca Ferguson took that trip, with two other student journalists from the Preface. The element of duress is clear (she wrote in the November 4 editorial: “If that is my punishment,’ so be it”). What many on campus and off must have wondered at is why the young editor, who has never shown any signs of doubting the Holocaust, had to have it “proved” to her at America’s leading atrocity museum. The local commercial paper, the South Bend Tribune, covered the “tour” with predictable enthusiasm, unwittingly citing one of the USHMM’s deliberately mangled quotes as yet another “proof" of the lone historical event not subject to question [see accompanying story on page 1].

Despite ADL’s success in reprimanding and censuring student journalists at these and other universities, support for open debate on campus has been strong, to judge from the number and quality of letters published in support of publishing the reward ad at Indiana U-South Bend, the University of Kansas, Marquette, and other campuses. These letters have come from gentiles and Jews; most profess belief in the Holocaust; almost all have been written by students (letters from professors have tended toward witless condemnation of student editors for running CODOH’s ads). One student, Lucas Neece of the University of Kansas, visited CODOHWeb, and included its Web address in his letter in The Kansan, November 4).

Getting students to go to CODOHWeb, of course, is what the reward ad, and what the Campus Project, is all about. The ease of access and vast array of revisionist scholarship is why ADL and its minions tremble even at CODOH’s smallest ads that display the address of CODOHWeb, let alone the big, attention-getting, ADL-blasting $250K reward ad. In the course of this academic year alone, upwards of 300,000 people, most of them college and university students and faculty, have been exposed to CODOH’s message and access to its powerful Website.

Outlining for its operatives a brief assessment of CODOH’s strategy, ADL identifies two aims of the Campus Project: “to generate a heated controversy on campus” and “to entice members of the campus and general communities onto Smith’s Website....”

Accurate enough, as far as it goes. But what the watchdogs who so zealously guard collegiate editors’ liberty not to run revisionist ads and op-eds have failed to factor in is their own role. Given the power of the Holocaust lobby, its great resources in money and manpower as compared to those of Smith and CODOH, given the prevailing situation on campus and off, the most effective way “to generate a heated controversy on campus” is proving to be enlisting the heavy hand of the ADL itself.

We don’t welcome the efforts of the ADL to censor our ads or to punish First Amendment-minded students for publishing them, but we do recognize—and we did foresee— that, in the present circumstances, challenging the ADL as well as the Holocaust cult is the best means of getting headlines—and lighting the way to CODOHWeb.

The Campus Project will have more—considerably more—to say about the ADL, and considerably more revisionist reality about the Jewish holocaust story to publish in the year ahead. For now, let’s just say that if the desire for historical truth and the will to personal liberty are CODOH’s aces in the hole, the ADL and its antics are now the joker in the pack—and as usual, the joker is wild.