"Holocaust Denial, A Pocket Guide," published be the Anti-Defamation League of B'nai B'rith, is forthrightly intended to short-circuit the success the Campus Project is having on college campuses. The booklet was prepared by Marc Caplan, Research Analyst, and Alan M. Schwartz. Director, of the Anti-Defamation League's "Research and Evaluation Department." Its opening paragraph reads:

"One of the most significant [revisionist] developments on college campuses today is the effort of a small group of propagandists to place advertisements in student newspapers questioning the established [sic] history of the Nazi Holocaust. The first of these ads claimed to call for 'open debate on the Holocaust'; it claimed to question not the fact of Nazi anti-Semitism, but merely whether this hatred resulted in an organized killing program. A more recent ad has questioned the authenticity of the U.S. Holocaust Memorial Museum in Washington, DC.; another has attempted to capitalize on the acclaim for Steven Spielberg's film, Schindler's List, by offering for sale "a shocking, absolutely unique video on Auschwitz," [David Cole's interview with Dr. Piper] which in fact attacks the proven [sic] facts of Nazi atrocit[ies] at that concentration camp."

Simply put, Caplan and Schwartz are talking about me and Committee for Open Debate on the Holocaust, wrapping it up in a sheath of accusations they hope will continue to distract college students and their professors away from weighing the evidence for and against the gassing chambers.

The Guide is effective propaganda. It forcefully demonizes revisionist theory and everybody associated with it, and quotes scholarly sources to back up the orthodox gas chamber stories. There is every reason to believe the booklet will be effective with students. On one hand students are being taught it is "hateful" to question what ADL asserts, and on the other, students remain largely unaware of the shameful nature of much of what ADL is identified with, primarily its totalitarian, Eastern-European-rooted campaign against intellectual freedom in America. 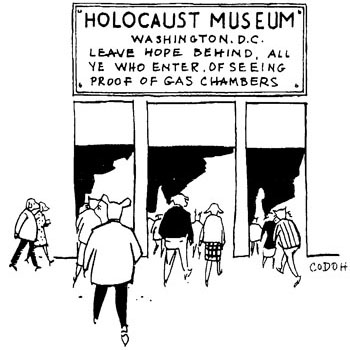 The professional quality of the Pocket Guide, backed by the tremendous financial resources available to the ADL, the ADL's broad access to public institutions including universities, media and particularly the print press, all this together might cause a more sensible man to feel a little disheartened. Unfortunately for those people, I've never been sensible or given over to feeling disheartened. I tend to go straight ahead, play my hand, and let the cards fall where they will.

The ADL, on the other hand, must win. That's its weakness. The Caplans and Schwartzes are afraid of intellectual freedom, because they can't control what might come from it. Neither can I. That's what intellectual freedom promises. That is, no promises. So no security. The liberation of the intellect, which is perhaps the process that leads to civilization, is always destabilizing.

Those who need to feel secure before they can allow others to think are too insecure to appreciate fully the great gifts of civilization.

The ADL Pocket Guide is not wrong about everything. But when its authors argue that revisionist theory should be suppressed because some who promote it are racists and antisemites, they're being particularly hypocritical. Antisemites and racists are among those who argue in favor of God, Family and the Welfare State as well, but we don't see the ADL types trying to suppress those. Why not?

At the same time I'm very aware, as Pat Hartman, the editor of SOLON, put it recently; when you lie down with dogs you get up with fleas. No security! The civilized idea we should keep in mind here is that nobody is wrong about everything! That includes the Caplans and Schwartzes and the antisemites and racists. We're all human, we're all in this together. Unless we are going to revert to the age-old totalitarian premise that bad people commit thought crimes, we should encourage each other to speak our minds. If we are going to take a run at being civilized, we will have to make an honest attempt to listen to those we disagree with. If it's true that no one is wrong about everything, it follows that every individual, even those of us who are despised, are right about some things.