Professor Faurisson's letter caused me to reflect again on how advertising, or any other piece of writing, is read from many different perspectives and understood in many different ways. And not only among revisionists either.

The original advertising for our videotape, which we sent exclusively to people in the revisionist community, ballyhooed the video in the time-honored marketing tradition of calling attention strictly to itself. It was a sales letter. I was happy with it.

Faurisson brings to my attention that others found our advertising insensitive and self-centered, that it ignores all the pioneering work done by men such as Butz, Felderer, Faurisson and others—without which it would not even have occurred to us to go to Auschwitz. I suppose we must have thought that everyone would understand that, but we were wrong.

Our point of view was very simple. David Cole had gotten Dr. Franciszek Piper to say on the record what he had said to others only off the record. This video has many valuable qualities, but that's the one that puts it on the map. Dr. Piper said it on the record.

Spotlight, The Institute for Historical Review, and Ernst Zuendel's newsletter Power have all run ads for the Cole/Piper tape, so all the Big Guys fronting for the Holocaust Lobby certainly have the tape in their possession, and it's my guess they're not very happy with it. I can imagine some of the dialogue that must pass between them as they watch David in action. I'd like to reproduce something here of how I think it goes, but I don't believe I should in a family-oriented publication like this one.

It would seem that Dr. Piper is a nice guy. Too bad it had to be him. Nevertheless, he said what he said. He said a lot more than what's on this first video. He's going to have to eat it. That's how the Holocaust game is played. You make a mistake, you say something honest at the wrong time, and someone is going to make you eat it. This time it's Dr. Piper's turn to belly up to the snack bar. 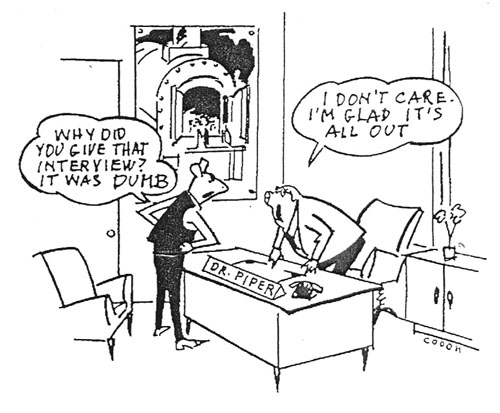 That is, false in one thing, false in everything. A reporter for the Duke Chronicle, Michael Saul, got me on the horn and explained how deeply Jews resented the headline. It implied that because we have evidence that the headline was being read in a way I did not mean for it to be read, so I changed it to read:

We aim to please. It's easy. Will it help us next time we submit the ad? I won't bet the farm on it, but it's one more reminder that, when you work with ideas, any "advertising" you do is going to be examined very critically and often times from one or more conflicting perspectives.

Jeffrey thought he had a handle an what the Campus Project was up to. He didn't have a clue. Jeffrey was thinking soap, while we were thinking VIDEO! Maybe if Jeff were to take a little hike himself, it would help clear his head. I wonder what he thinks about the Daily Texan? Surprise! Surprise! 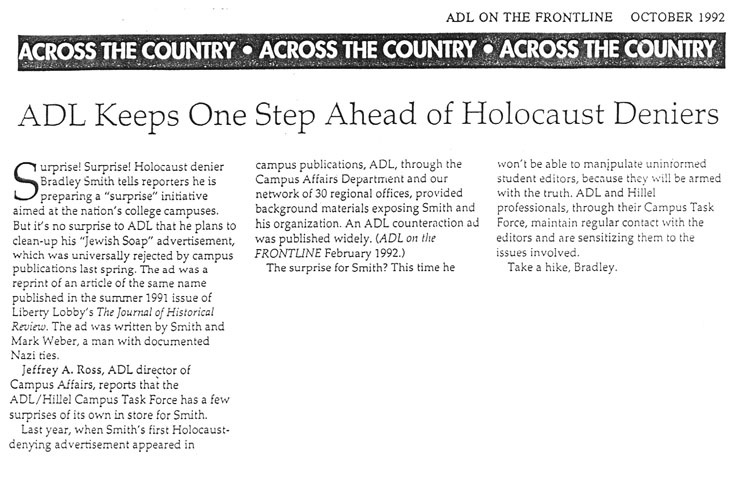