On February 2, 2012, Tehran hosted the second "Conference on Hollywoodism and Cinema" as part of the 2012 Fajr International Film Festival. President Ahmadinejad presented Robert Faurisson with an award at the conference and met with him in private.

The term Hollywoodism refers to the transformation, often mendacious, of reality by the spirit and practices of a whole sphere of American cinema. At first, I shall discuss the evil in general done by Hollywoodism. Secondly, I shall describe the wrongs of Hollywoodism in the shaping of the imposture of “the Holocaust,” that is, in building the myth of genocide, gas chambers, and six million Jews killed by the Germans during the Second World War. Finally, in a third and last part I shall speak of Revisionism as the antidote par excellence to Hollywoodism and its incessant, aggressive publicity for the religion of “the Holocaust.”

1. Hollywoodism and the evil that it does 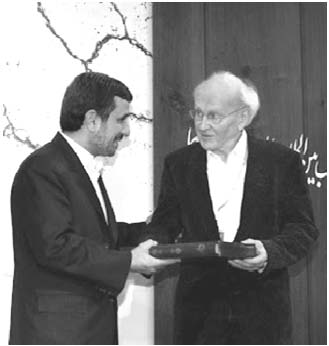 A well-known facet of the ideology propagated by this film industry is the basic division of the world between the Good and the Bad. The Good are the United States and the Bad are those whom the United States decrees as such. The Good are fundamentally Good and the Bad are fundamentally Bad. The United States is always in the right and always wins, whilst the “Bad Guys” are always in the wrong and always lose. Thus there cannot, there must not be any pity for the vanquished: their defeat proves that they were indeed criminals. The winners will independently assume the right to try the vanquished in court or to have them put on trial by others.

Everyone can bring to mind what are known as “the Nazi atrocities,” especially the images of walking corpses or corpses proper. For the past 67 years Hollywood has presented them as evidence that the Germans had death factories wherein the SS spent their time killing, especially Jews. In reality, those corpses were proof that because of the systematic destruction of German cities by the Allies, Germany in 1945 was in its death throes: the inhabitants who had survived the deluge of steel and fire were living in rubble or in holes in the ground, exposed to cold and hunger; often there was hardly any food or medicine; the hospitals and schools were destroyed; practically no trains and convoys were running any longer; the refugees from the East terrified by the invading Red Army’s murder and rape numbered in the millions. In 1948 the Italian director Roberto Rossellini faithfully described this situation in Germania, Anno Zero. Therefore one must not be surprised at the fact that in 1945, in the labor camps or concentration camps, famine and disease (typhus, typhoid fever, dysentery) reigned, whilst medicines and disinfectants such as Zyklon B were sorely lacking.

Hollywood, along with British cinema and Soviet propaganda, had a terrible and direct responsibility both in the lies attending what was called the discovery of the German concentration camps (1945) and in the ignoble “lynching party” (the phrase is that of Harlan Fiske Stone, Chief Justice of the US Supreme Court at the time) that was the Nuremberg trial (19451946), where the winners of the war, in coalition, made themselves judges and jury to try the defeated.

It is altogether true that in 1945 even a privileged concentration camp like that of Bergen-Belsen offered a nightmarish vision. But the horrors discovered there were not created by the Germans. They were due to the war and, in particular, an air war conducted mercilessly, to the end, by the Allies against… civilians. It took a fine cynicism to show those horrors and point an accusing finger at the defeated when the ones mainly responsible were the US Air Force and the Royal Air Force.

In April 1945, no longer able to manage, the commandant of Bergen-Belsen, SS captain Josef Kramer, sent some men to meet the advancing troops of British Marshal Montgomery and warn them that they were approaching a terrible den of infection, and that they should not immediately release the prisoners lest they contaminate the civilian population and the British soldiers. The British agreed to work with the Wehrmacht. Once on the site, they kept the detainees there and tried to treat them, but mortality remained appallingly high for a long time. The British wanted to know how many inmates were buried in the mass graves. They extracted the corpses and counted them; then, using a bulldozer, a British officer pushed the bodies towards six large ditches where the soldiers forced female SS guards to cast them in with their bare hands.

But this reality was very soon transformed by the film propaganda services, which had people believe that the bodies were those of people killed in an alleged extermination program. A photograph taken from a plane and showing the bulldozer from afar made it possible to convey the impression that the vehicle was driven by a German soldier performing his daily work as an employee of a death factory. In one case, a photo taken from up close showed the bottom of the machine pushing corpses but “beheaded” the driver so that, with him not appearing as a Briton, it was reckoned he was a German. The Americans went on to make more and more falsifications of this kind. The American general Eisenhower, supreme Allied commander, was the impresario of this intensified Hollywoodism.

The famous Hollywood film director George C. Stevens was brought to Germany in the uniform of lieutenant-colonel. His team shot 80,000 feet of film from which 6,000 feet (or 7.5% of the total) were selected for General William Donovan, special assistant to the US chief of counsel at Nuremberg. It was those parts carefully selected by the American prosecution which, on November 29, 1945, practically at the lifting of the curtain of the loathsome “Nuremberg Trial,” were projected to a stupefied world; some of the German defendants, most disturbed at what they saw, deduced that Hitler had carried out a gigantic crime behind their backs. In this sense it can be said that the “Nuremberg Trial” marked the triumph of Hollywoodism.

2. Hollywoodism’s part in creating the myth of “the Holocaust.”

“The Holocaust” of the Jews then became a sort of religion whose three main components are the extermination, the gas chambers, and the six million martyrs. According to an article of faith of this religion, Hitler ordered and planned the methodical slaughter of all European Jews; in so doing he committed a crime without precedent, a specific crime, later called genocide. Then, in order to commit this specific crime, he had a specific weapon developed, a weapon of mass destruction, the gas chamber, operating especially with a powerful insecticide, Zyklon B, whose active ingredient was hydrogen cyanide.

In the United States the film industry has fed on this belief and spread it throughout the Western world. It is especially since 1978 that such propaganda has been developed, particularly with the four episodes of the U.S. miniseries Holocaust recounting the saga of the Weiss family. It is no exaggeration to say that the showing of that series became, as of 1979, practically mandatory in an entire portion of the world. It triggered a torrent of films including, by Steven Spielberg, Schindler's List, by Roberto Benigni, Life Is Beautiful, by Roman Polanski, The Pianist.

In France, in 1985, Claude Lanzmann honored us with a documendaciary running for over nine hours: Shoah. The number of Emmy Awards, Oscars, and other prizes given to films like these is staggering. A mogul of the entertainment industry, Andrew Wallenstein, once stated in The Hollywood Reporter: “Let’s just say it: the real reason we see so many of these movies is that they’re awards bait.” It is such observations that have given rise to the saying “There's No Business Like Shoah Business,” inspired by the refrain of the song, sung by Liza Minnelli amongst others, “There’s No Business Like Show Business.”

3. Revisionism is an antidote to the poison of Hollywoodism

Revisionism is not an ideology but a remedy for the temptation of ideology. It is a method. Whether in matters of literature, science, history, the media or any human activity whatsoever, it prescribes that the reality of a fact be established prior to any considerations on that fact. One must again see, hear, read what is believed to have been seen, heard, or read. One must be wary of first impressions, of emotions, rumors, and must not rely on anything or anyone until one’s own thorough investigation has been conducted, all the more if one is studying a war rumor, for—let us not forget—in wartime the first casualty is the truth.

In the little time I have left here I cannot, unfortunately, describe how and at what price in fifty years of research I, along with a good number of other revisionists, have come to the conclusion that “the Holocaust” is decidedly but a gigantic imposture, as I was able to convince myself after a few years. Already on December 17, 1980, I had summarized this conclusion in a sentence of sixty French words of which I do not see a single one that needs removing today. Here is the English translation:

“The alleged Hitlerite gas chambers and the alleged genocide of the Jews form one and the same historical lie, which has permitted a gigantic political and financial swindle whose main beneficiaries are the State of Israel and international Zionism and whose main victims are the German people—but not their leaders—and the Palestinian people in their entirety.”

To get an idea of the spectacular victories won against that imposture thanks to the revisionists’ work, one may refer to two studies appearing in my blog: “The Victories of Revisionism” (conference paper for Tehran, December 11, 2006) and “The Victories of Revisionism (continued)” (September 11, 2011). It is no exaggeration to say that currently, in France and elsewhere, the authors who used to defend the “Holocaust” thesis are in complete disarray. The trouble is that censorship and repression still prevent the general public from becoming aware of this good news, but with the Internet, times are changing, and quickly.

The general belief on the part of the Western world in “the Holocaust” has long been the sword and shield of Zionism. But today Revisionism is putting this belief in peril. This conference on Hollywoodism will mark, I think, one more step in our common struggle, a struggle for the rights of all – especially the Palestinians –, a struggle for the whole world to free itself from a tyranny based on the Greatest Lie of Modern Times.