Alexander the Great and Darius - Kinsmen and Enemies

Edward Langford is the pen name of a historian and anthropologist who holds a doctoral degree in anthropology. He is the author of numerous articles dealing with history, and several books on anthropology.

It is a very common error to regard the Greeks and Persians as having been diametrically opposed peoples in history. This common misconception arises from the fact that the ancient Greeks were domiciled in Europe, and the ancient Persians in Asia, and because of the geographical distinctness of their place of residence it has been easy to assume wide differences in character and ethnic type between the two. Nothing could be further from the truth. The terms Asian and European meant little in history, for over large areas of Asia a culture and people prevailed who were closely related to the cultures and people of Europe. Thus the concept of geographical distinction between Europe and Asia should not be applied casually to the history of mankind.

If we assume a common Indo-European homeland in the area north of the Caucasus, and in modern Ukraine, then it will be readily seen that the ancient Greeks were an off-shoot of the Indo-European peoples who migrated westward into Europe, while the people of ancient Persia (modern day Iran) were a branch of the same family who moved south and south-east, instead, and established for themselves and their Parthian and Median kinsmen, a vast empire dominating the Middle East.

In appearance, too, the Greeks and true Persians were almost identical, it would seem. From statues and sculptures and coins, as well as from contemporary comment, we know both to have been long-headed, clean-featured, of fair coloring and ruddy complexion. Of these two branches of the Indo-European people, the Greeks were perhaps the more junior, and certainly, because possibly of the intricate nature of the Greek terrain, sub-divided into a multitude of islands and valleys divided by mountain ranges, the Greeks were slower in uniting politically, and in imperial or territorial expansion.

Thus it was the Persians, who having established themselves over a vast variety of nations and peoples of different origins, who moved westward into Europe, and threatened to establish their rule over the peoples of Ancient Greece also, long before the Greeks had considered the possibility of military expansion eastward into Asia. Thus we read of the epic battle of Thermopylae, and the great accompanying sea battle in which the Greeks halted the Persian advance into their homeland. Later, as Persian control over their rambling and diverse empire began to weaken, Alexander the Great led a small army of highly disciplined Macedonian Greeks into Asia, and overran and destroyed the remains of the Persian dynasty, which had by then lost its ethnic cohesion. 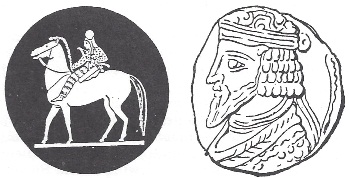 Left: A Persian Warrior.
Right: Arsaces XX, King of the Parthians 58-40 BC. (From a Persian coin.)

Because of their imperial achievements in the vast expanses of Asia, the Persians are not known for their democratic ways, as were the Greeks, but there is evidence that the first Persian nations who moved south over the Caucasus practiced the traditional Indo-European democratic system until their conquests converted them into feudal overlords. Certainly they praised learning, the arts, truth and bravery, which may be described as the ideal of the Greeks, and Persian children were taught to stem evil by “thought, word and deed.” The Greeks themselves praised the Persians as noblest amongst their enemies.

We see, therefore, in the combat between Greeks and Persians, the warring of two civilized and noble peoples, who in turn were closely related in blood. How often has the history of the world been analyzed in these terms! Why do neighbor and kinsman always fight neighbor and kinsman, and the more progressive seek always to destroy the equally advanced?