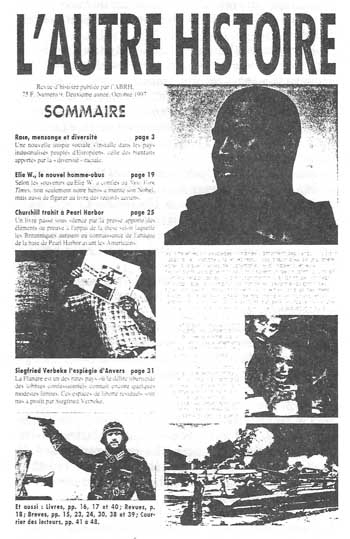 In France, a lively new revisionist history periodical L'Autre Histoire ("The Other History" or "Alternative History") is making a mark. Now in its third year of publication, a typical issue of this attractively laid out, richly illustrated, and intelligently written magazine-format periodical is 48 pages in length. Editor-publisher is Trystan Mordrel.

The June 1997 issue (No. 8) features an interview with David Irving along with a profile of the controversial British historian. It also includes a lengthy article on the Spanish Inquisition and the "Jewish Question" in Spain during the 15th and 16th centuries (translated and adapted from the Jan.-Feb. 1996 Journal), and a review-essay by Joseph Bishop about Roosevelt's efforts to provoke war with Japan (translated and adapted from the March-April 1996 Journal).

A typical issue includes several pages of readers' letters, a selection of briefnews items, short reviews of new books, and summary descriptions of interesting periodicals around the world.

A humorous piece by Bradley Smith about Elie Wiesel, and an interview with the important European revisionist publisher Siegfried Verbeke, are featured in the October 1997 issue (No. 9), along with an essay by Jared Taylor on "race, lies and diversity" (translated from his American Renaissance newsletter).

The seven-page lead article in the August 1995 issue traces the little-known history of militant Zionist groups in Europe from the 1930s to the present, including the working alliance between National Socialism and Zionism during the 1930s. Accompanying the article, which is based on an impressive recent book by Emmanuel Ratier, Les Guerriers d'Israel ("The Warriors of Israel"), are striking photographs of uniformed young Jewish men, members of the militantly Zionist "Betar" organization. Such groups were not only tolerated in Third Reich Germany, but were encouraged by the regime.

Other items in this issue deal with the elusive "gas chamber" at the Struthof-Natzweiler camp in French Alsace, and the emotion-laden question of differences of intelligence and behavior between races.

"A Marxist system typically spares criminals, while it also treats its political opponents as criminals."
—Solzhenitsyn