Amos Oz and the Art of the Bluff

Thought is swamped with journalism. Palestine. Afghanistan. Bush. On the fartherest horizon, the U.S. Congress. Why choose sides? The most stirring journalism is the result of having chosen sides. Wealth, the result of liberty, drives everything, diminishing liberty everywhere journalism encounters it.

I cannot be torn out of my culture, my genes. I can be loosened from them but they're always inside there, tumbling around. There was a time when the ideal of liberty was something new under the sun. The ideal remains what it was. We don't have time for it. Our wealth blinds us to the wonderful ideal of liberty. It buys thousands of battle tanks for one people, a corrupt tyrant for another. The journalism that follows is glorious.

Norman Mailer, after listening to a speech given by our President, remarks that he doesn't trust any man who utters the word "evil" a dozen times in ten minutes. I have friends who argue that President Bush is dumb. They refer to his use of the language, which I admit is not brilliant. I argue that it is refreshing to hear the President of a great nation speak with the language of ordinary people. Then I hear our President speak of the "axis of evil" and I understand that he has no feel for the language whatsoever. No feel for the history of the century just ended. 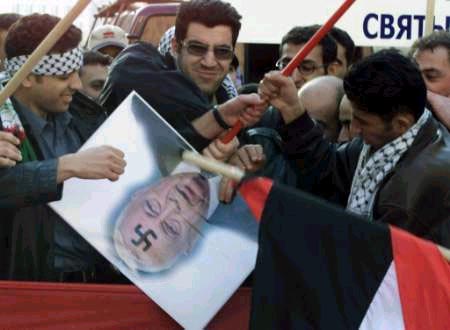 I should have understood that when he used the term "war on terrorism." The phrase made me uncomfortable, but I tried to live with it. Now the phrase is used by everyone to justify everything. What's terrorism? The Arabs can't figure it out. No one else wants to figure it out. Terrorism is the intentional initiation of force against non-combatants. Where does it start? In Palestine, when did it start? Why would Palestinian teenagers, boys and girls alike, want to stroll into Israeli hotels and pizzerias to intentionally murder Israeli teenagers, along with their families and friends?

Americans know how to handle this question. The journalists, the intellectuals, the politicos. They handle it by never asking it. Never! It might compromise those with whom we share so much of our wealth—one hundred billion, maybe two hundred billion dollars over half a century. It might shame those whom we have convinced ourselves are above criticism. It would cost many intellectuals, many professors, many journalists their livelihoods.

It doesn't matter how the violence in the Middle East began. It began revving up in the years following World War II with the invasion and conquest of Arab Palestine by European Jews, but it doesn't matter. Here we are now. Palestinian Arabs, Israeli Jews, and the Americans. Will Palestinian Arabs stop their intentional killing of Israeli civilians, an exercise in the initiation of force? Will Israeli Jews suppress their greed for Palestinian land, which can only be fulfilled through the initiation of force or the threat of it? Will Americans petition their Congress to stop funding this bloody Project? Who among us is going to change his spots?

Amos Oz is a highly respected Israeli Jewish novelist and journalist. He has a fine face and a winning personality. I've seen him on PBS television twice now. Matters look very dark to Mr. Oz. What does he believe the problem is, why it is so intractable? Because there are two peoples who want the same piece of land and they are both victims. Palestinian Arabs and Israeli Jews. Victims both. The Jews suffered a "mass murder" in Eastern Europe, and the Palestinian Arabs have been dispossessed of the land they love, their land. See? They are both victims.

One wonders how a sophisticated man like Amos Oz is willing to throw such cards on the table. He's not stupid. It must be something else. He has a graciously forgiving, even humble manner as he plays his hand. It does not occur to the PBS newsman, or his Jewish producer, to make an obvious observation. Even if the Jews of Eastern Europe were "victimized" by Germans—and they were, though there are many holes in the story that need to be addressed—what does that have to do with the victimization of Palestinian Arabs by Israeli Jews? Where's the connection? No one will ask.

The hand that Amos Oz has chosen to play is a sentimental and at the same time steely bluff. He knows he will not lose this hand. He understands that no one is going to point out to him that while the Germans were guilty of victimizing European Jews, Israeli Jews are guilty of victimizing Palestinian Arabs—and that there is no connection between the two. None. As a matter of fact, that's how most Palestinians feel about the matter. There's no connection. Only Israeli aggression against Palestinians, funded year after year by the U.S. Congress.

What does this have to say about the sophisticated play of Amos Oz about Israeli Jews and Palestinian Arabs both being "victims" in Palestine? He's bluffing, he's too intelligent to not know that he's bluffing. He knows that the Americans are unwilling to call his hand. Famous Jewish writers have bluffed for so long about Germans and Palestinians, they have been so successful at playing the "Holocaust" card, they have contributed to winning such immense rewards for Israeli Jews, that they don't even contemplate playing the real hand that they have dealt themselves. Why should they? With one US administration after another, without exception, the bluff works, and Israeli Jews walk away with the pot time and again.