An Evil Campaign to Frame an Innocent Man

The Demjanjuk Affair: The Rise and Fall of a Show-Trial, by Yoram Sheftel. London: Victor Gollancz, 1994. 379 pages.

Lesya Jones is the former Secretary of the Canadian Charitable Committee in Defence of John Demjanjuk. This review first appeared in The Ukrainian Voice (Winnipeg), July 31, 1995.

On July 29, 1993, John Demjanjuk was acquitted by the Israeli Supreme Court of the charge of being the sadistic Treblinka guard “Ivan the Terrible.” This book, written by his Israeli attorney, deals with the pivotal Israeli chapter of his 16 year ordeal.

The title says it all, in a nutshell. It is a scathing and uncompromising account of the “trial of the century.” Its author, a fervent Zionist and Israeli patriot, spares none of the many players in the Demjanjuk affair, not even the “Ukrainian goyim” who paid for his fees. It is a highly personal account in which the defense counsel, and not the accused, is the star attraction in a courtroom drama that riveted a worldwide audience.

An experienced criminal lawyer and expert in identification cases, with a penchant for adventure (he successfully defended the notorious gangster Meyer Lansky), Sheftel decided to join the defense team after being shown the highly suggestive and biased photo spread used to identify John Demjanjuk as “Ivan the Terrible.” On a more personal level, he was motivated to take on the case because he was convinced that “the one and only purpose of this move was to conduct a special ‘Israel-style’ show trial, to teach Israeli children the story of the Holocaust and heighten Holocaust awareness among the public.” 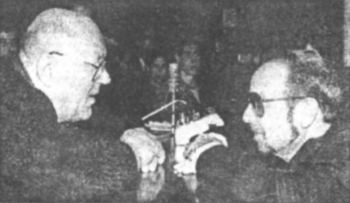 John Demjanjuk (left), a Ukrainian-born retired Ohio autoworker, confers with his lawyer, Yoram Sheftel, during his trial in Jerusalem, December 1991.

The fast-paced and ebullient style contrasts chillingly with the grim and sinister content. Sheftel amasses incontrovertible evidence which proves that the Demjanjuk affair was not simply a case of mistaken identity but, rather, a deliberate and cold-blooded conspiracy by superpowers United States and former Soviet Union, as well as Germany, Israel and Poland to withhold exculpatory evidence in their possession and send to the gallows an innocent no man’s man. These countries did this in pursuit of their respective agendas.

In the United States, the Office of Special Investigation (OSI) at the Department of Justice, which was established to investigate alleged Nazi war criminals residing in the US, was particularly zealous in its efforts to destroy Demjanjuk. Having just lost a series of decisions, the OSI was, in fact, fighting for its life. Congressman Joshua Eilberg, Chairman of the House of Representatives’ Subcommittee on Immigration, wrote in August, 1978, to US Attorney General Griffin Bell re the Demjanjuk case: “We cannot afford to risk losing another decision.” This anxiety was shared by Alan Ryan Jr., who headed the OSI from its establishment until 1981. In an interview with a local Alabama newspaper in 1991, Ryan reminisced: “If we had lost that case, we probably would have had a very short life span.” In other words, “the OSI conspired to shorten Demjanjuk’s life in order to lengthen its own.”

In fact, the OSI knew as early as August 1978 from Moscow cables sent to the State Department in Washington as well as to the American Embassy in Tel Aviv that John Demjanjuk was not “Ivan the Terrible,” and not only did it withhold that evidence from the defense, but dumped some of it, including original documents, into its trash bins. Furthermore, the garbage contents revealed that the OSI did not just conceal exonerating evidence, but manufactured false affidavits in collusion with the Israeli prosecution.

In reading this book, one gets the impression that, far from being intimidated, the author relished being “Satan’s lawyer” and “the most hated man in Israel.” Courage, not modesty, is Sheftel’s cardinal virtue. But then, Demjanjuk’s attorney has nothing to be modest about. After all, he took on single-handedly his country’s justice system and formidable mass media and won unprecedented decisions on both counts, debunking firmly entrenched myths that Israel possesses a model justice system and an independent, unbiased press.

Neither death threats, unrelenting harassment by the judges, daily vilification in the media, suspicious suicide of a prominent colleague on the eve of the appeal, an acid attack by an alleged Holocaust survivor, which nearly left him blind; not even the wrath of his beloved mother could stay this intrepid attorney from the case. And in the darkest hour, when all seemed lost – there being no time to prepare the appeal – fortune and history intervened. A timely heart attack of one of the judges granted a crucial respite and the collapse of the Soviet Union made it possible to access KGB archives which established conclusively Demjanjuk’s innocence and forced the Israeli Supreme Court’s hand.

Sheftel delights in getting back at his opponents and detractors, especially his nemesis, the presiding Supreme Court Justice Dov Levin. The chapter entitled “Dovele” is written as “sweet revenge” for the many humiliations, trials and tribulations Sheftel endured, and may be of particular interest to the legal community in North America. It will shock those who choose to read it, for the instances of judicial misconduct are legion.

For example, immediately after affixing his signature to the verdict, Judge Levin set off on a lecture tour of the United States, undeterred by the fact that the Demjanjuk case was still sub judice. Ohio’s Plain Dealer cited one of his many legal gems, namely: “We cannot be impressed by someone claiming ‘I am innocent.’ Innocence must be proven.” Sheftel is angered and embittered by “the cowardice and hypocrisy of the thousands of the Israeli legal community.” The only one who dared to speak out publicly was the highly respected, retired Judge Haim Cohen. In an interview with the newspaper Al Hasharon, Judge Cohen stated: “It was a spectacular for the people. Any resemblance to justice was purely coincidental.”

The reader will be revolted, along with Lord Denning, revisiting the reading of the sentence after which a jubilant mob danced and shouted: “Death, death,” “Death to Ivan,” “Death to the defense attorney,” “Death to all Ukrainians ...” It may be recalled that Lord Denning condemned the grotesque spectacle in Jerusalem as “contrary to international law” and showing “signs of racial and political vengeance.” (The Daily Telegraph [London], April 28, 1988).

The book has flaws. There is no index and there are misspellings of names, as well as some factual errors. For instance, the author confuses The Ukrainian Weekly with a Ukrainian communist newspaper. Sheftel’s explosive book has suffered an even worse fate than that by expert witness for the defense, Willem A. Wagenaar, Identifying Ivan: A Case Study in Legal Psychology (Cambridge, Mass.: Harvard University Press, 1989). With the exception of Chrystia Freeland’s review in The Financial Times (London), December 10–11, 1994, Sheftel’s work continues to be ignored, except in Israel where it became an immediate best-seller. Demjanjuk’s miraculous acquittal appears to have put a damper on the projected multimillion “Ivan the Terrible”/Demjanjuk entertainment industry. The only ones benefitting are those who conspired to send an innocent man to a horrific death by hanging.

In spite of the fact that the Sixth Circuit Court in Cincinnati, Ohio, found “fraud upon the court,” the OSI is still in business, and the chief architects of the Demjanjuk affair not only remain unpunished, but have found lucrative employment elsewhere. While in Israel, Judges Zvi Tal and Dalia Dorner were elevated to the Supreme Court.

The book is highly recommended, especially to our legal Ukrainian community. There was quality input by Ukrainian attorneys into Demjanjuk’s defense. Paul Chumak of Toronto did a first-rate job as one of a team of Demjanjuk’s lawyers and the late Jaroslaw Dobrowolskyj of Detroit played a crucial role in uncovering evidence which cleared John Demjanjuk. Others labored behind the scenes. This reviewer is, therefore, saddened by the fact that our legal community continues to pretend that the Demjanjuk affair involved one individual Ukrainian, and refuses even to acknowledge the existence of a collective indictment against Ukrainians. Let me cite from pages 4 and 7 (English translation) of the Indictment by the State of Israel versus Ivan (John) Demjanjuk, Criminal Case 373/86:

The auxiliaries played an essential role in the annihilation of the Jews; without them, the commanders of Operation Reinhardt could not have carried out their plan... These auxiliaries, in the main Ukrainians, worked with SS personnel in carrying out all the acts of annihilation, murder and oppression committed against the Jewish victims in the camps.

May this indictment, which still stands, serve as a challenge to our legal community to right a historical wrong.

"Since the general civilization of mankind, I believe there are more instances of the abridgment ofthe freedom ofthe people by gradual and silent encroachments of those in power than by violent and sudden usurpations."
—James Madison, in the Virginia Convention, June 5, 1788