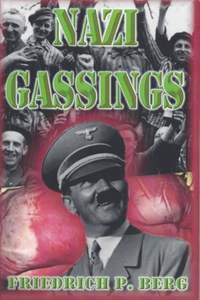 For several decades now, Friedrich Berg has started arguments with fellow revisionists about certain technical issues of relevance to the orthodox Holocaust narrative. Usually these arguments were hidden from public view, as they took place mainly in email exchanges between the parties involved and some bystanders Berg tried to drag into the fray. The last of these exchanges—with Robert Faurisson and Fred Leuchter as his main adversaries—took place only a few weeks before writing these lines. It had been triggered by Berg’s having read for the first time my critical edition of the Leuchter Report – ten years after its first edition had been published. I spare the reader the details of this or earlier polemic altercations, in particular since Berg's language is often disrespectful and abusive.

During an earlier episode of these Bergian temper tantrums, I tried to understand the reason for these repeated nasty attacks Berg launches against individuals who by all reckonings should be his revisionist friends and allies. I even discussed Berg's behavior with a psychologist specializing in analyzing the underlying reasons for the misbehaviors of troubled children and adolescents. Her conclusion was that Berg's immature behavior points to a severe lack of self-confidence and an inferiority complex. His screaming contests with other revisionists clearly indicate that he thinks his important technical findings are being misunderstood or even ignored by the revisionist community—a thought wholly at odds with the facts. The idea therefore crossed my mind to help boost Berg's self-perception and reputation by helping him publish a fine monograph containing all his major and minor contributions to revisionism. I suggested this to him more than a year ago. His reaction was that all he had to say is posted on his website www.nazigassings.com. He insisted that I take his material as posted and put it somehow into book form. It goes without saying that this is not the way publishers or editors work. They might be able to turn a mediocre manuscript into a respectable book, but creating a book from disorganized scrapbook-like postings on a website is not their job. That clearly is the author's obligation. Berg, however, was not willing to do it.

But he now has found someone else to do that job for him. This person disclaimed all responsibility for the book's style and contents, explaining to me that the book is exactly what Berg had ordered it to be. So I won't reveal the editor's name here. Whatever the orders were, if we look at the actual book, it becomes clear that a no-frills-approach to book creation was chosen that couldn't be any cheaper. The book has no table of contents, no footnotes, no bibliography, and only occasionally gives references to sources quoted. The text is set with wide margins (perhaps to boost the page count) and is not hyphenated. Punctuation is haphazard, spelling errors are frequent, and references to webpages and websites are usually not spelled out but contained as embedded links in the original web texts. They are still functioning links in the book's Kindle version, but in the printed version they simply show as bold and underlined text, which makes them useless to the reader of the hard copy. I have not checked any of the links as to whether they are still correct, but on p. 139 this book contains a spelled-out link to John C. Ball's former website air-photo.com which has been defunct for almost a decade. Hence it is probably safe to assume that many of the links contained in the Kindle edition are outdated as well. The book's illustrations are of low resolution, as is common for websites from which they were taken, but not conducive for printed books.

The editor confirmed that the book is basically a cut-and-paste assembly of various web texts from Berg's website. If any editing was done, it was very superficial. The cover design is cheap and ugly. The back cover, which should contain an interest-piquing summary of the book, simply is identical to the text on the book's first text page. The text of the first 13 pages is repeated at the very end of the book. This is only the most striking instance of repetitions, of which there are many throughout the book, some verbatim, some by basic contents. I've marked my hard copy with "repeated" notes in its wide margins whenever I ran into something I had read already earlier, and the book is full of them. The question, for instance, of whether and to what degree it is possible to commit mass murder with diesel exhaust – Berg's home turf – is addressed four times, thrice briefly (pp. 8-10, 32, 187-190) and once more-thoroughly (76-87). Repetitious also are several sweeping polemical statements, for example that Americans "should pray that there is no God" on the score of their holocaustian aerial warfare against civilians during World War II and later conflicts (pp. 16, 36, 51, similar pp. 47, 132), or that Hitler and the Nazis were right with the way they treated the Jews (pp. 50, 54, 56f.).

A serious flaw of this book is Berg's outdated and contradictory discussion of the infamous Auschwitz document containing the term "Vergasungskeller" (gassing cellar) in connection with Crematorium II. In his 1976 classic The Hoax of the Twentieth Century, Arthur Butz posited that this term referred to a basement where generator gas was produced from coke as fuel for the cremation furnaces. Butz later corrected that error after becoming familiar with the cremation furnaces' design, eventually settling for the hypothesis that this document referred to a basement that served as a "gas [protection] basement" as an auxiliary function (see the latest, 2015 edition of his book). On p. 128 of Berg's book, Butz's original, flawed interpretation is repeated, while on p. 115 Berg claims that this term refers to a delousing chamber. He bases this conclusion on his misinterpretation of an earlier Auschwitz document talking about large-scale delousing actions throughout the entire camp.

This, together with Berg's behind-the-scenes "discussion" of the critically commented Leuchter report ten years after the critique’s first appearance, gives the impression that Berg does not keep track of revisionist research and publishing activities. Well, considering that he propounds two different, mutually exclusive and wrong interpretations of a single document just 13 pages apart, there is evidence that he doesn't even keep track of his own writings.

As to the book's contents, anyone hoping to find all of Berg's major contributions collected or at least summarized here will walk away disappointed. Berg's website is an assembly of several additional, but usually marginal findings to his older contributions, summaries of some of which are interwoven now and again. His book therefore has the same patchwork-like style and contents. “Fritz” Berg's other two main papers published in the ole Journal for Historical Review – "Typhus and the Jews" and "Zyklon B and the German Delousing Chambers"—are only mentioned in passing. The Diesel issue is explained in some detail, but not as deeply as any newcomer to revisionism looking for a thorough overview might expect and hope for. Berg's ongoing disagreement with Prof. Faurisson is covered to some degree when Berg discusses railway delousing tunnels, which he thinks would have been a technology permitting large-scale conveyor-belt-style mass murders (pp. 155-174). As much as I consider Berg's hypothetical arguments valid, he loses my sympathy again when calling revisionists who disagree with him "retarded" (p. 174). Berg may be an excellent engineer, but his emotional and social intelligence, sadly, very badly impair the receptibility and understandability of what he has to say.

On the upside, there are four new insights I did take away from reading this "book":

I was looking forward to the publication of Berg's book, because his website, which contains a lot of valuable information, is too disorganized to make that information easily accessible to the development of understanding. Writing a book usually forces an author to take a systematic approach to his topic, and to organize his thoughts. Unfortunately this is not what Berg did to cobble together this tome. Although it does contain a summary of Friedrich Berg's most-important contribution to revisionism, this book is not an improvement compared to his website. It is of use only to those who dislike reading web pages and prefer paper pages. The book is little more than a paperback-bound collection of website printouts.

The Kindle edition of this book is of the same low quality, although it has the advantage that web links embedded into the text are actually accessible, provided one is using an eBook reader which has Internet access and can display webpages.

All told, I do not recommend this book, but if you like Berg's message, maybe you'd be better off buying a T-shirt that clearly says "Hitler was right!" (Berg's words, p. 54).