Recent headlines announcing that World War One had finally ended were sure to raise an eyebrow of those of us who noticed. While even on-going wars like those in Iraq and Afghanistan are minor media stories dwarfed by the latest extravagances and debauchery of Hollywood's rich and famous and the momentary stars of "reality" TV, it's no wonder that most missed the end of "the War to End All Wars." While few of us are old enough to recall the actual fighting which drew to a close on 11 November 1918, the matter was apparently not officially closed until Germany had made its final payment. It was indeed that final payment to the war's victors that allowed the officials to declare "game over." 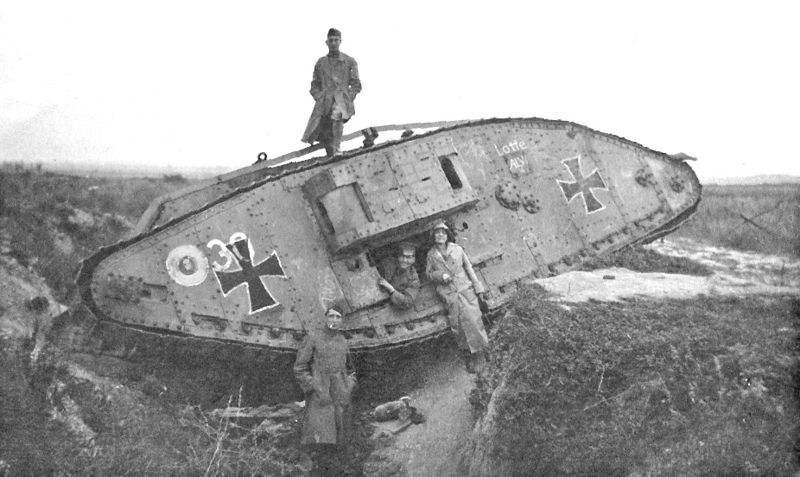 Surprising headlines announce that World War One has finally ended in 2010. For those posing by this captured English tank, they surely anticipated an earlier end. By Aloahwild (Family photo from early part of 1900s, scan) [CC-BY-SA-3.0 (www.creativecommons.org/licenses/by-sa/3.0) or GFDL (www.gnu.org/copyleft/fdl.html)], via Wikimedia Commons.

While this announcement may seem an unimportant matter in our age of iPods and iPhones, it highlights several key points for those of us who label ourselves "revisionists." While "setting history into accord with the facts" as Harry Barnes would have put it, is the stuff of which all good historical writing has always been composed, it was in the years that followed Europe's first great immolation that Revisionism was born. Attempting to revise the terms of the Armistice as laid out in the treaty of Versailles, revisionists sought to move beyond the old hatreds that fueled the murder of millions to a common understanding among nations that would usher in a time of peace. Revisionists accurately prophesied that the economic punishment inflicted upon Germany as well as the humiliating coerced admission of guilt for the war's initiation would serve no purpose but to renew hostilities at the first possible moment. Indeed the economic sanctions and the Treaty of Versailles were key elements in the rise of National Socialism and the tremendous waste of life that became popularly known as World War Two.

Crippling economic sanctions appeared to be the peaceful weapon of choice in the years following World War One. Sound economic theory would not only prevent "aggressor" nations from rebuilding a military, it would funnel the pillaged booty of those so foolish as to lay down their arms to those who refused to stop the bloodletting. We must note the sums which seemed crippling some 90 years ago seem insignificant when compared to the ridiculous spending of today's wars. If Germany has only now paid off World War One, when might we expect the current wars to be paid off?

Hot wars have an objective. There is a goal that can be easily understood by all; to destroy one's enemy. The enemy may be and often is cast as a monstrous villain who must be destroyed at all costs. Failure to annihilate "them" will mean sure annihilation of "us". But such hot wars come to an end – at least the fighting and economic hyperactivity with which they are so closely tied. The Cold War is a significant improvement as a concept. In the Cold War you get all the spending with little of the death and protests that come when a tired nation no longer recalls the reason to halt the spread of foreign economic and social ideologies. With the War on Terror the eternal threat of an extremist faith always ready to strike at the civilian population not only ensures unlimited budgets for military growth (wasn't it the Pentagon who recently asked to have its budget slashed because it didn't know what to do with the funds?) but also the need to deploy our forces to the far-flung corners of the empire. It seems that out-of-control spending and self-inflicted debt can be our friend. With an economics-in-wonderland attitude no debt can ever be too high, and no debt will need be repaid. A lesson those silly fiscally responsible Huns could never understand!

As the declaration of World War One's end falls on deaf ears, we must wonder when the wars that followed will come to an end. From the appearance of things, several may never end. By the time of World War Two, economic deprivation had been replaced with psychological persecution. This was not going to be the "guilt clause" of Versailles but the new hyper-guilt of Nuremberg – a guilt that was so great that no one would ever question the methods of the crusaders who slew the Nazi beast. Civilians would be marched through the camps. Those who did not see them personally would be subjected to the films made by horror-film director Alfred Hitchcock and other Hollywood talent flown in for the occasion. New words would be created, books would be written, memorials and museums would spring up in what might be described as the greatest faith-based movement of the second half of the 20th century.

While the payments for losing World War One eventually came to an end, shedding the guilt of World War Two amounts to denouncing the Virgin Mary as a harlot during the Inquisition – even analyzing the Nazi Holocaust is the heresy of the 20th and now 21st century. The guilt of World War Two and its associated atrocities are fundamental to our world vision, our expansion of empire and our perpetual wars. For every would-be tyrant, every former-friend-turned–despot, enables a military action if only to prevent another "Chamberlain at Munich." Every opportunity for diplomacy and peace is painted as foolishness that is better resolved by blitzkrieg. Any ideology other than social democracy is a threat that requires the speedy deployment of our well-armed forces. The empire spreads and the economy inflates. Even during our recent economic failures, the fear of mass depression (the worst since FDR's New Deal) prevents the conclusion of hostilities abroad. For without war we would surely feel the Depression's icy blast once again.

If the announcement of the end of World War One means anything for American revisionists, it simply means that our dream of the USA minding its own business, taking care of its own and dismantling its empire is out of reach. Our solutions to the world's woes are a heresy not unlike that of questioning the unique guilt and monstrosity of Germans. So focused are American court historians on our long-defeated enemy that they fail to recognize his likeness when they look in the mirror. But then again, why should we consider our national sins, (didn't the Japs in Nagasaki have it coming?) why should we wonder about the origin of so much of the world's hatred towards us? Why should we care while we have Facebook, reality TV, football and Hollywood? We are a nation that would forfeit its rights for a flat-screen TV and a home theater system. We are a naïve and self-absorbed people who are doomed to pay the reparations of war both in dollars and blood forever into an eternal future.