Auschwitz: A case of plagiarism

The myth of "the gas chambers" is based almost exclusively on false and contradictory "eyewitness testimonies" which are accepted as authentic, in dogmatic and uncritical fashion, by the official historiography.[1]

Some "eyewitnesses," such as Kurt Gerstein, Charles Sigismund Bendel, Ada Bimko, Rudolf Höss, and Miklos Nyiszli, furnished their delirious "testimonies" at the end of the Second World War and in the immediate postwar periods.[2]

The "eyewitness" Filip Müller, on the other hand, "waited thirty years before resolving to write,"[3] and finally, in 1979, published a detailed "testimony": Eyewitness Auschwitz: Three Years in the Gas Chambers.[4]

This "eyewitness testimony," however, since it is largely the result of a shameless plagiarism, as we shall demonstrate in this study, is completely devoid of probative value, just as is that of Filip Müller's predecessors mentioned above.

Filip Müller was allegedly "a direct witness during almost three years to the annihilation of the Jews of Europe"[5] who "miraculously escaped five liquidations of the Auschwitz Sonderkommando."[6]

In compiling his tardy "eyewitness testimony," he drew his inspiration largely from the classics of the literature devoted to the "extermination" of the Jews, including the Kalendarium der Ereignisse im Konzentrationslager Auschwitz-Birkenau (Calendar of Events in the Concentration Camp Auschwitz-Birkenau) and the documents in possession of the Auschwitz Museum, in order to avoid the foolish mistakes committed by a large number of his predecessors.

Concerning the "gas chambers" at Auschwitz, his source is Miklos Nyiszli's book Auschwitz: A Doctor's Eyewitness Account, published in installments by the magazine Quick in Munich in 1961,[7] a wildly false testimony[8] which Filip Müller plagiarized unrestrainedly, as we shall show in this study.

We begin by examining the most important plagiarism, the speech of the dayan.[9]

We now proceed to the examination of other instances of plagiarism, and specify that the citations are drawn from the following works:

The higher-ups had estimated twenty minutes for the cremation of three corpses and it was Stark's duty to see to it that this duration was not exceeded.[12]

15 massive ovens, functioning without interruption, were able to incinerate more than 3,000 corpses a day.[13]

When the last gold took has been pulled out, the corpses end up with the incineration commando. They are laid in threes on a pushcart made of sheet metal. The heavy iron doors open automatically. In twenty minutes the corpses are consumed.[14]

According to a letter from the chief of the "Central Construction Office of the Waffen-SS and Police Auschwitz" of 28 June 1943,[15] however, the incineration capacity for 24 hours of the crematoria of Birkenau was as follows (the figures on the far right are from Nyiszli and Müller):

This capacity corresponds to the cremation of one corpse in one muffle in 15 minutes or of three corpses in 45 minutes. This however is technically impossible; this document as well has been forged or doctored. According to the calculations of the firm Topf and Sons, crematoria IV and V consumed 1,120 kilograms of coke in 12 hours of use.[l7] It follows that if one had been able to incinerate 384 corpses in 12 hours, the cremation of one corpse would have required less than 3 kg of coal, and that 3 corpses could have been incinerated in a single muffle in 45 minutes, which is absurd.[18]

A crematory capacity of 3,240 corpses in 24 hours in 15 muffles is a fortiori even more absurd; therefore Filip Müller must have plagiarized Nyiszli.

The increase in the number of ovens by nearly eight times in comparison to those of the Auschwitz crematorium and the employment of forty times as many prisoners in the Sonderkommando enabled the incineration of up to 10,000 corpses in 24 hours, after initial difficulties in the extermination procedure had been surmounted.[l9]

In all up to 10,000 men could be brought from the gas chambers into the crematory ovens every day.[20]

The original Hungarian text of Nyiszli's book does not in fact correspond to this translation. Here is the actual sense:

The bodies of the dead are consumed in twenty minutes. One crematorium operates with fifteen ovens. Its daily crematory capacity is five thousand persons. Four crematoria function in all, with an equivalent operational capacity. Twenty thousand go to their end in the gas chambers and, from there, into the incineration ovens.[21]

In reality the maximum cremation capacity of 15 muffles, according to Nyiszli's figures, would have been 3,240 corpses in 24 hours, not 5,000. Furthermore, the four crematoria could not possibly have operated at the same rate, since crematoria II and III each had 15 muffles, while crematoria IV and V had only 8 apiece. Nyiszli's German translator, then, has "corrected" Nyiszli's mistaken arithmetic, and gone on to round off the result to 10,000 (9,936 according to the actual number of muffles at Birkenau).

This cremation capacity is technically impossible, and demonstrates that, here as well, Filip Müller has plagiarized from the German text of Nyiszli published in the magazine Quick.

[In contrast to the burning pits] intense heat could be maintained, with help of ventilators, in the crematory ovens.[22]

Fifteen such ventilators operated simultaneously; there is one beside each oven.[23]

Topf's ovens were not furnished with ventilators, but with a compressor connected to the cremation room by special tubing (Rohrleitung or Luftrohrleiting),[24] and thus, here again, Filip Müller has plagiarized Nyiszli.

When the Zyklon-B crystals which had been thrown in came into contact with air, the deadly gas formed, first expanding at floor level and then rising ever higher. Because of that the biggest and strongest lay on top of the heaps of corpses, while chiefly children, the old and the weak were on the bottom. In between were mostly men and women of middle age. Doubtless those on top had in their terror of death climbed up on the ones who already lay on the floor, because they still had the strength to and perhaps had also realized that the deadly gas was expanding upwards from below.[25]

A horrible picture: the corpses aren't scattered in the room, but piled high on top of one another. That's easily explained: the Cyclon, which is thrown in from outside, releases its deadly gases at floor level first. It reaches the upper layers of air only gradually. That's why the victims trample one another, one climbing on the other. The higher they are, the later the gas reaches them.[26]

The scene described can not be authentic because it presupposes that the gas in question[27] is heavier than air and thus saturates the "gas chambers" from bottom to top, as a fluid fills a receptacle. Nyiszli has evidently based it on the mistaken notion that Zyklon B consisted of "chlorine."[28] In fact "hydrocyanic acid fumes are lighter than air [specific gravity in relation to air: 0.97] and consequently rise in the atmosphere."[29] This means that hydrocyanic acid emanates from Zyklon B by rising slowly (in the absence of air currents) without first saturating the lower layers of air at ground level. It is therefore impossible that, in order to escape the gas as long as possible, the victims climbed on one another toward precisely those layers of air in the "gas chamber" in which the concentration of hydrocyanic acid was greatest (the presence of which in any case could easily be detected because it was, according to Müller, "neither odorless or tasteless. It smelled like methylated spirits and was sweet to the taste." )[30]

The plagiarism is further confirmed by the description of the tubes through which Zyklon B was introduced into the "gas chamber," a description which Müller likewise has drawn from Nyiszli.

The Zyklon B gas crystals were thrown through holes in the concrete ceiling which opened into hollow sheet-metal pillars. These were perforated at regular intervals; inside them a spiral ran from the ceiling to the floor to allow for as equal as possible a distribution of the granulated crystals.[31]

In the middle of the room were pillars at thirty-meter intervals. They rose from the floor to the ceiling. Not supporting pillars, but sheet-iron pipes, the sides of which contained many perforations.[32]

Moreover, most of the holes at the base of the tubes would have been obstructed by the bodies of the victims pressed against them, slowing, again, the diffusion of the gas, by channeling it upwards into the air beneath the ceiling, from whence it would descend gradually towards the floor. Thus these tubes render the scene invented by Nyiszli and plagiarized by Müller even more absurd.

Finally, the cleansing of the corpses with water hoses after each "gassing" would have allowed water to accumulate on the pillars' inner walls, and on the floor surface within their perimeters where the Zyklon B granules would land, once again retarding the emission of the gas.[35]

Filip Müller has therefore taken this scene from Nyiszli.

Müller has plagiarized the entire process of the "extermination" in the "gas chambers:"

Müller reports further that many Gypsies in camp BIIe died of noma. Danuta Czech alludes to this disease, widespread in the Gypsy camp at Birkenau in 1944, in her monograph "The role of the camp hospital at KL Auschwitz II,"[38] referring specifically to Nyiszli's work,[39] and it is thus evident that here too Müller has had recourse to plagiarism.

Although Müller declared in a letter to John Bennett that he had known Nyiszli quite well,[40] he was careful not to mention this in his book,[41] evidently from fear lest his plagiarism be discovered.

In composing his "eyewitness testimony," Filip Müller used other sources as well.

... groups leaned against the walls, pressed against each other, like pillars of basalt.[46]

The dead are standing straight like pillars of basalt, ranged tightly one against the other in the chambers.[47]

For almost all were wet with sweat and urine, soiled with excrement, and the legs of many women were streaked with menstrual blood.[48]

The bodies are thrown outside, damp with sweat and urine, dirtied with excrement and with menstrual blood on the legs.[49]

But the coup de grace to this "eyewitness" is supplied by Müller himself. After describing the escape from Birkenau, on April 7, 1944, of Alfred Wetzler and Walter Rosenberg (Rudolf Vrba), he states:

I had handed Alfred a plan of the crematoria with the gas chambers and a list of the names of the SS personnel who worked in the crematoria.[50]

The two fugitives wrote two reports on their purported experience at Auschwitz, which were published in the United States in November 1944.[51]

In fact, a plan of Crematoria I and II (II and III according to the official German numbering) of Birkenau with the alleged "gas chambers"[52] appears on page 15 of the report written by Alfred Wetzler,[53] but this plan is a complete fabrication, as is demonstrated by a simple comparison with the original,[54] whence it is clear that the originator of the drawing never set foot in the place he describes.

If Filip Müller actually drew the plan in question, then he never was in Crematoria II and III and his "eyewitness testimony" is a fortiori completely false.[55]

Is it possible that he would have us believe that it was this sketch which he handed Wetzler? 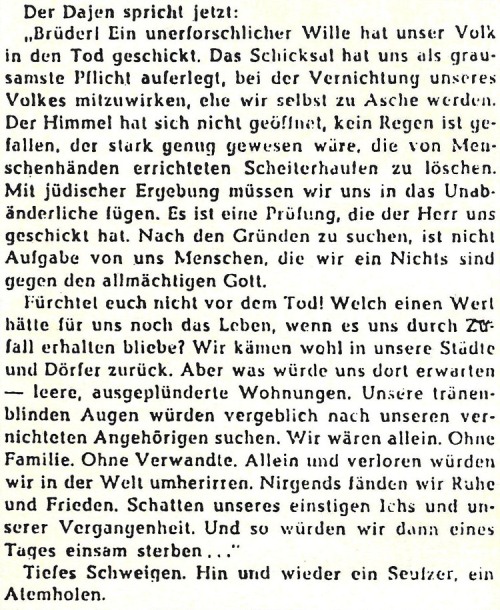 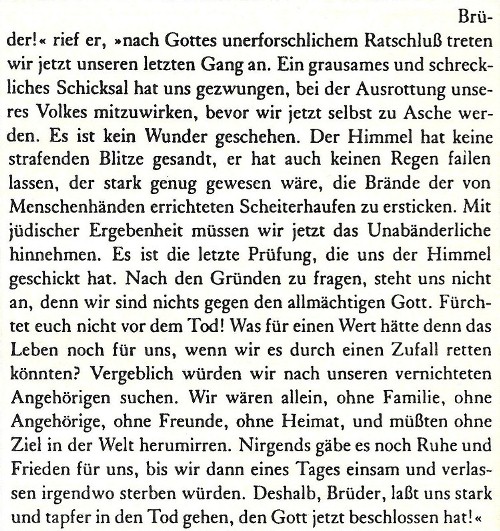 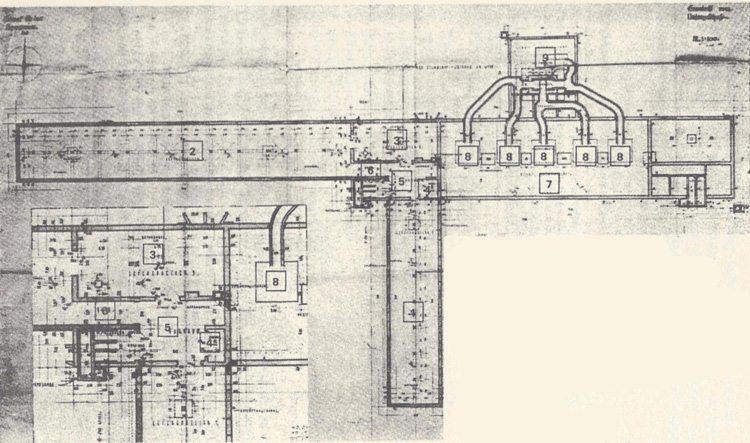 Figure 4: Plan of Birkenau Crematoriums I and II (II and III). From Executive Office of the President, War Refugee Board, Washington, D.C., German Extermination Camps – Auschwitz and Birkenau, November 1944, p. 15 (the description below is based on that of pp. 14, 16 in this report). 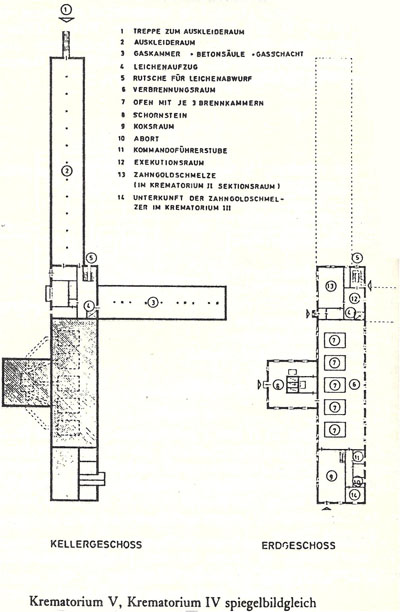 N.B.: The reference to the numeration of the crematoria which appears on the plan (V and IV) is erroneous.

The identification of rooms 12 and 13 stems from the "eyewitness testimony" of Miklos Nyiszli.