An important legal battle is shaping up in Australia over an effort initiated by Jewish-Zionist groups to ban Internet web site writings that reject standard “Holocaust” extermination claims. In a landmark decision with international implications for freedom of speech, the government has ordered a leading Australian revisionist history resource center to remove from its site material that “denies the Holocaust,” and to issue an abject written apology to the country’s Jews.

Acting at the behest of Australian Jewry, the country’s “Human Rights and Equal Opportunity Commission” (HREOC) on October 10, 2000, issued its order against the Adelaide Institute, which is headed by Dr. Fredrick Töben. HREOC Commissioner Kathleen McEvoy declared that the Institute had violated Section 18C of the country’s 1975 “Racial Discrimination Act” by posting material whose main purpose was to denigrate Jews. The material, “none of which was of a historical, intellectual or scientific standard,” she declared, should be banned because it is “bullying, insulting and offensive.”

The order came in response to a 1996 complaint by the Executive Council of Australian Jewry (ECAJ), the country’s most influential Jewish community organization. Welcoming the order, ECAJ national vice-president Jeremy Jones said that “Toben’s Holocaust denial is offensive, insulting and, as HREOC has now confirmed, unlawful.” He added: “The Commissioner has demonstrated an understanding of the need to apply laws which cover... the Internet and has also endorsed the view expressed in other jurisdictions that anti-Semitism masking as pseudo-history is as pernicious as more overt forms of racial hatred.”

“This is a landmark case,” said Peter Wertheim, a Jewish community leader, and ECAJ lawyer in the legal action, “because it deals with hate on the Internet, and it’s the first in Australia, and quite possibly anywhere in the world, to have done so.”

Consistent with his attitude throughout this legal battle, Töben immediately declared his defiance of the HREOC order, saying that he would not apologize for posting “factually correct material.” The only consideration for the HREOC, he noted, is whether Jews were offended by the posted material. “I shall do nothing,” he said, “because I consider the proceedings [that led to the order] to have been immoral because truth was not a defense.”

Töben has persistently protested the HROEC’s standards and procedures. Noting that in such “human rights” cases, the truthfulness or accuracy of the material is not a consideration, he said: “Truth is not a defense. I cannot defend myself against someone’s hurt feelings.” In September 1997 Töben walked out of a preliminary hearing regarding his publications. “I cannot proceed,” he declared, “because if truth is no defense, the lie must prevail. We have an inquisition here.” He also withdrew from a public hearing scheduled for December 1997, protesting that he and the Adelaide Institute were being denied “natural justice.”

Alan Gold, president of the “anti-defamation unit” of the Jewish-Zionist B’nai B’rith organization commented: “The decision by McEvoy to order the removal of material from the Adelaide Institute’s web site is one of the first serious moves to be made against the real menace which the Internet has made possible...Her decision should rightly send shockwaves through the Internet community, to the racists who publish their viewpoints and service providers who allow their businesses to be used by these people.” (Sydney Morning Herald, Oct. 19)

In early November 2000, the Australia/Israel & Jewish Affairs Council joined the ECAJ in calling on the country’s Federal Court to enforce the HREOC censorship order against Töben and the Adelaide Institute. Freedom of speech not an absolute right, argued ECAJ president Nina Bassat. “Hurtful, abusive and incorrect” statements cannot be permitted, she said.

Olga Scully, an associate in Tasmania of the Adelaide Institute, is similarly being targeted by the HREOC and ECAJ. She engaged in “unlawful conduct,” the HREOC has declared, by placing anti-Jewish literature in letter boxes and by selling such material at a market. She has been ordered to desist, and to apologize to Jews. The ECAJ has announced plans to bring her case to Federal Court. Scully – a Russian-born 57-year-old grandmother – is not intimidated, and says that she is “quite prepared” to go to prison. “I’ve lived through worse horrors in my childhood – certainly my family did. A few months or years in jail – that’s not going to be any worry to me whatever.” Jewish Bolshevik officials killed both of her grandfathers, she says. Fleeing Communism during World War II, her parents brought her as an infant with her two brothers to Germany in 1943 where, she says, her family was treated with kindness. 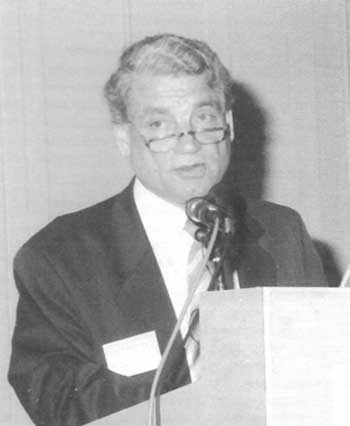 Fredrick Töben was born in 1944 in northern Germany, but emigrated with his family to Australia when he was ten. He has lived most of his life in his new homeland, and is an Australian citizen. He studied at universities in Australia, New Zealand and Germany, and holds a Master’s degree in education and a Doctorate in philosophy. He has worked as a teacher in Germany, New Zealand, Rhodesia/Zimbabwe, Nigeria and Australia.

He founded the Adelaide Institute in 1994. Centered in South Australia’s largest city, and funded by donations, it plays a major role in the worldwide struggle against the historical blackout through its web site, an informative newsletter, and other activities. It can be reached at P.O. Box 3300, Norwood 5067, Australia. Web site: http://www.adelaideinstitute.org E-mail: [email protected]

Last year Töben was jailed for seven months in Germany (April–November 1999) for having disputed Holocaust extermination allegations. (See “German Court Sentences Australian Holocaust Skeptic,” July-August 1999 Journal, pp. 2-5.) He reported on his arrest and imprisonment in his address on May 28, 2000, at the 13th IHR Conference in southern California.

Standards for determining just what is “offensive” are, obviously, elastic and subjective. Many people feel “offended” or “insulted” by much of what appears in magazines, books, as well as on the Internet. That’s life. If anyone wants to avoid being “offended” by what’s on the Adelaide Institute web site, or any other Internet site, he merely has to refrain from viewing the material. Simple.

In practice, only the politically powerful are able to translate their notions of what is “offensive” or “insulting” into law that everyone must obey. No government anywhere has attempted to censor Internet web sites that present a pro-Communist view of history, even though such sites presumably “offend” many victims of Communism. The only serious efforts – so far, anyway – to censor the Internet have, not accidentally, been in response to Jewish complaints.

The laws in various countries that criminalize skepticism of Holocaust extermination claims are the result of a well-organized, long-term Jewish campaign. In 1982 the Institute for Jewish Affairs in London, an agency of the World Jewish Congress, announced that it was launching a worldwide campaign to persuade and pressure governments to outlaw “Holocaust denial” (Jewish Chronicle [London], April 23, 1982). The anti-revisionist “thought crime” laws that have subsequently been enacted in several European countries, as well as in Australia, reflect the success of this initiative. Underscoring the organized nature of this campaign, in June 1998 the International Association of Jewish Lawyers and Jurists called for new and more severe laws against Holocaust revisionism. (“Jewish Group Demands more Anti-Revisionist Laws,” July-August 1998 Journal, p. 22.)

In Canada a censorship effort is underway similar to the one against Töben. Acting on a complaint from a Jewish group, a similarly named “Human Rights Commission” has called German-born publicist and civil rights activist Ernst Zundel before a “Human Rights Tribunal” in Toronto on charges that material posted on the US-based “Zundelsite” is “likely to expose” Jews to “hatred or contempt.” In this case as well, the truth or factuality of the allegedly offensive material is irrelevant.

The effort to censor the Adelaide Institute is particularly ominous because it comes in a country with a fairly strong tradition of free speech and civil liberties. If Australia’s Federal Court upholds the precedent-setting “Human Rights Commission” order banning Internet material, Jewish groups might next seek to censor books, newspapers and television broadcasts they deem “offensive” or “insulting.”

Happily, at least a few voices are speaking out against the effort to censor the Adelaide Institute web site. (These echo the criticisms in 1993 by Australian newspapers and civil liberties groups of a government order banning British historian David Irving from the country. See “Irving Barred From Australia: Major Newspapers and Civil Liberties Groups Denounce Ban Against Historian,” May-June 1993 Journal, pp. 13-15.)

A leading Australian daily paper, the Herald Sun of Melbourne, commented (Nov. 13): “To see how our over-bossy complaints industry can cause more harm than good, check the Executive Council of Australian Jewry’s bid to close down the web site of Dr. Fredrick Töben.” While calling Töben “a worry,” the influential daily warned that the Jewish campaign is only contributing to his “martyrdom.” Töben and Adelaide Institute associate Olga Scully, the paper concluded, can “now pose as a victims of a Jewish bid to deny them free speech, and there’s sadly just enough truth in that to make them [sic] a real menace.”

Terry Lane, a veteran newspaper columnist and television commentator, was more pointed in his criticism. “Are we to take it,” wrote Lane in The Sunday Age (Melbourne, Oct. 15), “that the human rights commissioner is going to order every outspoken person who offends some group or other to desist and apologize?” Toben’s claim about gas chambers, he added, is one that “can be proven or disproved by evidence. It does not need to be censored in advance of the argument ... If Töben is telling the truth, nothing will stop it. If he is a malicious fantasist, then he will be ignored. We should test his assertions, not silence them.” (See also Lane’s remarkable 1992 commentary, “I Surrender,” in the May-June 1993 Journal, p. 15.)

Nigel Jackson, an Australian author and civil rights defender, called the HREOC order “a victory of interests over principles.” He continued:

The HREOC can fairly be described as a pseudo-judicial body which was established and entrenched a few decades ago by servile and foolish governments to advance the interests of Jewish pressure groups and other minority ethnic bodies.

Any fair-minded person who studies the publications of the Adelaide Institute over recent years will quickly realize that the HREOC’s poorly articulated claim that none of its “Holocaust material” is “of historical, intellectual of scientific standard” is nonsense.

During the last 50 years a significant number of highly intelligent and academically qualified people have cast profound doubt on the received version of “the Holocaust,” which was promoted after World War Two and became prominent in the seventies. The simplistic claim (of doubtful veracity) that all “mainstream historians” agree that “the Holocaust” consumed “the lives of six million Jews” will not remove that doubt. It is probably tautologous, the definition of “mainstream” being “those who accept the received version.” Historical disagreement of this kind should be dealt with by free and open debate in the intellectual forums of the land and not by appeal from a financially powerful elite to biased commissions or the courts.

For Jewish-Zionist groups, the campaign against “Holocaust” skeptics is nothing less than a war. Thus, WIZO Victoria, an Australian Zionist women’s organization, recently sponsored a special “War Against Holocaust Denial” meeting, at which prominent Zionist speakers addressed more than a hundred persons.