Among Arabian myths, few stories have excited our imagination more than Ali Baba and his Forty Thieves. As Ali Baba recited the words "Open Sesame," the sealed doors to a lair full of unimaginable riches mysteriously opened. In a similar manner, western politicians profanely invoke the secret word "Auschwitz" in the expectation that it will open doors to unimaginable political power by catering to Jewish voters.

Senator Barack Obama has been accused of the ultimate impropriety - "lying about the Holocaust for political gain." 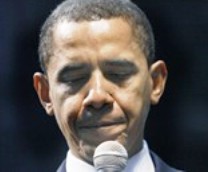 Yet, why should that accusation raise any eyebrows or otherwise be deemed scandalous? The establishment has been doing the same thing for decades. In a Memorial Day Speech Obama told an audience of American veterans that his "uncle" liberated Auschwitz Concentration camp.

"I had an uncle who was part of the first American troops to go into Auschwitz and liberate the concentration camps.

And the story in my family is that when he came home, he just went into the attic, and he didn't leave the house for six months."

Of course, Auschwitz was never liberated by American forces. I recall that a Jewish Auschwitz "survivor" once made the same gaffe during the course of a conversation with me about her war experiences two or three years ago, but she wasn't running for President of the United States.

Be that as it may, it is perhaps rather moot to even refer to the camp of Auschwitz as being "liberated," whether by the Americans or Soviets, as Auschwitz had been completely evacuated by the Germans two weeks before the Soviets overtook the camp. The 3000 or so remaining inmates, either too elderly, ill, or too weak to travel, had already been "emancipated" by the Germans before they evacuated the camp. In the case of Holocaust spokesperson Elie Wiesel, he and his father opted to flee with the Germans rather than be liberated by the Soviets.

Facts have never been an overriding factor in determining how our politicians address the issue of the Holocaust. Insofar as politicians and the Holocaust are concerned, Obama is neither better nor worse than any of the other candidates, either in this election year or any years previous. They have all been playing the Holocaust card to obtain an advantage and curry favor with Jewish voters and the corporate media for decades, but Barack Obama does it with a bit more style and flair. I call it the "Jive and Wail."

In 2002 Obama stated in a speech given before an audience in Chicago, Illinois:

"My grandfather signed up for a foreign war the day after Pearl Harbor was bombed. He fought in Patton's army. He saw the dead and dying across the fields of Europe. He heard the stories of fellow troops who first entered Auschwitz and Treblinka."

From the context of the statement, one is tempted to assume that Obama's grandfather signed up for military service on "the day after Pearl Harbor" ostensibly to fight the Japanese, but nevertheless ends up fighting "in Patton's army" in Germany where he hears the stories of "fellow troops who first entered Auschwitz and Treblinka."

Treblinka? The former camp of Treblinka was a barren field in 1945. Who could have possibly "entered Treblinka" as "liberators?"

Now we have two stories. In the most recent story, Obama's "uncle" actually "goes into Auschwitz and liberates the concentration camps." In the 2002 version, it is his "grandfather" who "hears the stories of fellow troops who first entered Auschwitz and Treblinka."

Which prompts the question, did Obama's grandfather serve in the Soviet Army?

For good measure, in the 2002 version, Obama added, "He fought in the name of a larger freedom. Part of that arsenal of democracy that triumphed over evil, and he did not fight in vain."

Beautiful catch phrases and buzz words carefully calculated to invoke a desired emotional response in the minds of his listeners, Obama liberally engages in this type of rhetoric, much as an Indian fakir mesmerizes the Cobra. Will Americans soon witness Obama's version of the rope trick as he ascends into the clouds, followed by Oprah Winfrey, his devoted apostle? Have I perhaps missed something here, or is Barack Obama's concept of history completely muddled? Wasn't it President Reagan who referred to the former Soviet Union as an "Evil Empire?" Is Barack Obama able to reconcile his characterization with the fact that the Soviet Union imposed a brutally harsh dictatorship over Eastern Europe, in what was subsequently described by Nazi propagandist Josef Goebbels as "The Iron Curtain," - a catchy phrase later appropriated by Winston Churchill? Should not the question therefore be asked,

Did Obama's "grandfather" or "uncle" or "great uncle" [take your pick] triumph over evil or assist to enable evil?

Obama avers that upon his return to the states, his "uncle" or grandfather was so distraught over Auschwitz that he immediately fled into the attic and refused to leave for six months. This odd description perhaps gives new meaning to the old saying, "Bats in the Belfry."

Not only did Obama get the name of the camp wrong; he also got the identity of his own relative wrong as well.

He "mistook Auschwitz for Ordruf."

He mistook Ordruf for Buchenwald.

He mistook his uncle for his grandfather and mistook them both for his "great uncle."

Obama's apologists attributed his gaffe to being "tired," yet what can be said of an individual who is so "tired" that he doesn't know the difference between his grandfather, his uncle, or his great uncle?

But the story does not end here. There is a "third" version of the same story.

In his autobiography, Dreams of My Father, Obama states his grandfather never engaged in combat at all:

"Gramps returned from the war never having seen real combat, and the family moved to California, where he enrolled at Berkeley under the GI bill. But the classroom couldn't contain his ambitions, his restlessness, and so the family moved again."

Seeking to neutralize rising criticism, Obama's aides issued a statement where they only ended up exacerbating the issue:

Mr Obama's great uncle Charlie Payne had helped liberate a concentration camp as part of the 89th Infantry Division, but it was Buchenwald and not Auschwitz.

Thus, the "grandfather" and "uncle" morphed into his "great uncle, Charlie Payne." Moreover, Army records contradict Obama's claim that his grandfather enlisted for military service the day after Pearl Harbor was attacked.

"It's unfortunate that he mentioned the wrong concentration camp."

I would opine that it is more unfortunate that he mentioned the wrong relative – on three separate occasions.

"Look at the substance."

Indeed. One looks in vain, but the only "substance" to be found is slipperier than elm.

The Republican National Committee was far less apologetic and stated "this just proves that Barack Obama is not ready to be Commander-in-Chief because of the misstatement of facts."

As the rising smoke evaporates from Oprah's Opium Den of Misinformation, we are left with the sad portrait of a modern day Icarus who continues to fly precariously too close to the sun.

Unless Obama straightens up, his final legacy to American politics might well usher in a new genre of "Yo Mama" to "Obama" jokes that might well begin along the following lines:

"Obama is so tired "