Specialists will find little of interest in Battlefields, but it is not daunting for the novice and includes commentary for battlefield tourists. Holmes is fair to all participants in his study. The book contains a provocative introduction that justifies the bankrupting of a mighty nation to fight a legendary war. Holmes supplies no annotation, only an informal bibliography to suggest further reading.

The historiography of the Second World War originally lauded the Churchillian significance of those who "shall fight on the beaches" until the mighty new world "steps forth to the rescue and the liberation of the old." Postwar historians tended to overemphasize the importance of the North African theater and virtually neglected the Russian front entirely—it being the proverbial "unknown war," where eighty percent of the losses of the Wehrmacht were actually incurred. 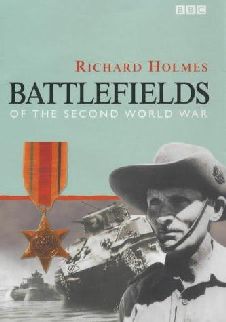 In recent years, however, with the mining of Russian archives and mushrooming interest in the so-called genocidal war of ideologies, the eastern front has emerged in importance. By the same token, Hollywood has driven an increasingly smarmy America-centric view of the war as being won by jazzy companies of Yanks at places like Omaha and Bastogne.

Holmes calmly sets to reaffirm the Tommies’ contribution to the bitter crusade against the penultimate Axis of Evil, perhaps seeking to restore patriotic pride for a UK generation that knows the war only from movies and TV.

Holmes makes his best case for British relevance with Alamein. This was the theater that Hitler found an irreducible thorn in his side. It allowed the Allies to deconstruct the myth of German invincibility, despite the Wehrmacht’s superior military fighting power, usually calculated as a twenty percent advantage over their Allied counterparts. Furthermore, because the independent Royal Air Force was built for strategic bombing from its inception in 1918, it had to overcome a gauntlet of inter-service rivalry while forced to develop effective close-air support tactics, a tribute to crucial innovation in the desert war, but years behind proven Luftwaffe doctrines.

Cassino illustrates the importance of terrain. Holmes examines the battlefield himself and wonders at the perseverance of the ordinary footsoldier.

Market Garden, the largest airborne operation ever undertaken, was hatched by Field Marshal Montgomery in an unlikely scenario that might have ended the war months ahead of schedule. Despite spectacular failure, Market Garden was another worthy effort for British generations to be proud of in the grand Anglo-American scheme to ‘liberate’ the world.

Perhaps Holmes’s most controversial viewpoint is his defense of the "shortening of the war" by the RAF’s aerial bombing campaign over Germany. The bomber piece is worth the price alone and serves as a good introduction to the Bomber War from the viewpoint of the foremost firebrands of "taking the terror to the enemy." Bomber Command’s aircrew attacked the most heavily defended airspace seen until Hanoi in 1972 and lost 55,500 lives, the surviving heroes bringing home a bitter legacy of moral uncertainty. Holmes sniffs at the conscience of David Irving, "part of his lonely campaign to show that the Nazis were not much worse than anyone else."

All of this insouciant Churchillian patriotism begs the question, however, whether the Allies really were "much better" than anyone else. For Professor Richard Holmes in the UK, of that moral certainty there is no question.