Believing in Pluto and the Holocaust

I grew up in much simpler times. I remember learning the names of all nine planets. They started with Mercury and worked their way out to Pluto. Pluto was the ninth planet, a cold and dark place; the furthest planet from the sun. I was also taught about the Second World War. I learned about the battles, the nefarious sneak-attack on Pearl Harbor, our invasion of Normandy on D-day, and the dropping of the atom-bomb on Hiroshima. I remember also learning of the Nazis mistreatment of Jews – their roundup and incarceration in concentration camps scattered around Europe. I also heard of the use of poison gas which streamed out of shower heads and the brutal murder of six million. 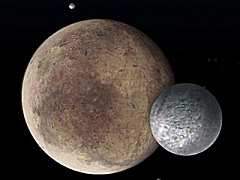 The times apparently aren't so simple anymore. I hear on the news that Pluto isn't a planet after all and I've come to believe that the Holocaust, as its referred to today, isn't all it was cracked up to be either. Belief is a strange thing – we don't really decide what to believe in, we just do. Maybe it's cultural, maybe it comes from our teachers or our family or perhaps it's something else altogether. Sometimes we believe things without looking into them at all. As a kid, I believed in Santa Claus; I had no reason not to. My parents told me that Santa brought gifts and sure enough, gifts showed up right on schedule.

It didn't take a major study for me to give up on Santa. With Pluto it's a little different. Scientists have altered the definition of "planet" and determined that Pluto isn't one. Pluto is still out there just the same as it ever was, it's just not a planet anymore. I have no real reason to argue with the scientists. I have come to believe that Pluto isn't a planet any longer.

The Holocaust may be a bit like Pluto. Today for the Holocaust to be the Holocaust, six million Jews have to have been killed mainly in gas chambers as planned and ordered by Adolf Hitler. From what I read there isn't any evidence that Hitler ever ordered the extermination of the Jews. The six million figure appears to be more a symbol than reality and the gas chambers – well they say there isn't much evidence for them, but I have yet to find any at all. So if that's how we need to define the Holocaust, I guess the Holocaust just isn't the Holocaust anymore. Of course, just as Pluto remains in the sky, the tragedies experienced by Jewish families happened no matter what we call it. Maybe the historians need to change the definition of "Holocaust," just like the scientists have changed the definition of "planet."

So there it is. I no longer believe in Pluto or the Holocaust. I wonder if I will be arrested for not believing in Pluto anymore? Have I become anti-planet or anti-Plutonion? The times were so much simpler when I was a kid – when I still believed in Santa and Pluto and the Holocaust. Somehow I feel saddened by little Pluto losing its stature and place in the galaxy. I am not saddened, however, to have found no evidence that the Nazis killed six million Jews. That I would call — good news!