Bezos Will Never Know, nor (Could He) Care

Books? Oh, yes, BOOKS! I remember books. Books bin bery good to me, with apologies to Chico Escuela. But I am, today, the richest man in the world, and books are, metaphorically, but the acorn from which my mighty empire grew, and grew and grew, and today books command far less than one percent of the thoughts I devote to my burgeoning empire.

Jeff Bezos never really said anything quite like the faux quotation above, but well he might have, if someone brought up to him a recent (2017) incident over in the corner of his online domain that (still) sells … books! But if I were in his position, that’s about how I imagine I might perceive of the entire, quaint subject. Yes, Amazon grew out of an online retailer of books, and something between the fortuitous happenstance of medium (the Internet) and truly ingenious insight into the marketing of a uniquely intellectual/sensational product, Amazon Books became … Amazon.

To those of us whose lives and purposes are still encompassed by those books (and, of course, their electronic spawn, ebooks) Amazon has become such a huge elephant in the room (if not the room itself) that we often forget: books are nothing to Amazon such as Amazon is to books. That’s right; if Amazon has expanded so far and so fast as to utterly dominate the book trade in a way never realized since the first imitator copied Gutenberg’s new invention, Amazon at the same time, and since, has expanded to dominate retail trade, and many other areas such as government contracting, by almost as much, and on a scale that simply trivializes that little business of books.

SO … the behemoth Amazon Books is in no way to be related to its puny progenitor, which I’ll call Bezos Books. Bezos Books was modestly, and brilliantly, launched by the man himself from a garage in Seattle in 1994. The rest, as they say, is history. And a part, perhaps a key part, of the seminal insight of the founding genius was, since his “bookstore” was infinitely expandable, to offer “all books—the good, the bad and the ugly,” so as to “set the truth free.[1]” No mere noble gesture, this: it was a profound liberation of the human spirit, at least so far as the spirits of those who wished to read and who had Internet connections was concerned. It should go down in the annals of intellectual history as the equivalent of Prometheus receiving fire from the gods. Perhaps it will yet, in the retrospect of the centuries. 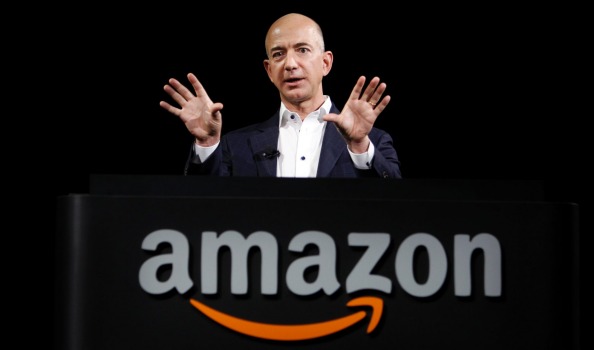 But it’s over, for now. The flame gutters; darkness intrudes from every direction, even as the founding genius himself has acquired the leading newspaper in America’s Capital and emblazoned the motto “Democracy dies in darkness” beneath the masthead at the top of the front page of every edition.

Amazon.com, by which I indicate the site that sells books and oh, so many other things to oh, so many of us, deleted from its listings over 155 books and ebooks on the subject of Holocaust history[2], several of which were published even before Amazon itself first raised its seedling head above the ever-seething froth of the Internet of 1994. What was wrong with these books, which its “Content Validation Team” recently pronounced “violated its [unchanged] contents guidelines” that had not been wrong with them up until that time?

What was wrong with them, it turns out, was that they violated the “content guidelines” of Yad Vashem, the memorial to the Holocaust erected by Israel in its largest city, Jerusalem. Yad Vashem, the Board of [Jewish] Deputies in Great Britain, the World Jewish Congress, and sundry other entities had long and often voiced their objection to Amazon’s carrying this growing body of scholarly inquiry in its lists, usually in the form of “letters to Jeff Bezos.” Such entities also, as a matter of their routine business, address entreaties to God, called “prayers,” but these to Bezos, as now somewhat of a God on Earth so far as Books to Be Bestowed upon the Masses are concerned, were, as it were, copied to the Internet. As with missives to the Diety Himself, no doubt these were routed to various underlings for disposition. God Gets Mail, God knows. Bezos/God/Amazon until 2017 seemed in His infinite wisdom to have ignored these appeals. But in 2017, something must have been different. The List was pulled—all of it, in every language, in every format. Holocaust revisionism, after a residence going back for decades, was obliterated from the Biggest Bookstore on Earth, as though it had never existed. An Unsubject, to paraphrase George Orwell.

Bezos knows none of this. It would be hard, after all, for a muzzled cause such as Holocaust revisionism to gain his attention in the first place; I know it would be hard as to me-in-his-place. Books? Hah! But a tiny speck receding to the horizon in his rear-view mirror; at least it would be for me. Bezos, likewise had no hand in this book-burning in the first place. Indeed, it’s abundantly clear that he would not have. What has happened, rather, is that the helm has grown too large, too multifarious, for the master’s hand. That wise hand has, inevitably, loosened as to each of the many parts of an enterprise that has grown too extensive for any human intention to direct all its parts in keeping with all its (the human intention’s) wisdom. You just can’t steer a supertanker the way you can steer a skiff. Jeff Bezos will never learn of this incident. Jewish organizations addressing their entreaties “to him” is pure subterfuge; its purpose is to trick its opponents into addressing their objections to Bezos as well (and it seems to have worked). The attention of God to the entreaties of earthly religious authorities might be viewed with similar skepticism, of course.

Yad Vashem no more persuaded Jeff Bezos to abandon his original precepts in selling books than Moses persuaded God to part the Red Sea for him and his beleaguered band of exodizers. In reality, Yad Vashem issued a signal to their operative(s) within Amazon, sympathetic sayan(im) positioned, by no coincidence, in critical places in Amazon’s vast infrastructure, ready and able to do the bidding of their masters in Jerusalem. A conspiracy? Yes, if the implication of a plan and/or ultimate intention suits you. An inquiry into the command structure of Amazon.com should ultimately yield the names and faces involved in this explicitly ideological conspiracy. The conspicuous understatement and suppression of media reports of the book-burning can be explained in part by the conspirators’ desire to keep the matter off Jeff Bezos’s personal radar.

What if Bezos were somehow to be made aware of this? It’s easy to imagine that he might not get around to dealing with it at all; he is an entrepreneur, not an ideologue. It’s a tempest in a teapot. How many revisionists are there in the world in the first place, and just who are they (not)? Suppose he was in any way tempted to deal with the matter. If he reversed the act, he would immediately incur the wrath of organized Jewry all around the world; definitely bad for business, in his case a business grown beyond imagining past the bounds of mere bookselling, particularly into regions (the Government) subject to political influence, and we know that arena is already firmly in the grip of the sayanim. Furthermore, he would unavoidably support the impression that he is losing his grip on his empire, and that its policies were vacillating from one end to the other of the spectrum uncontrollably.

No, his 1998 declaration of “the good, the bad and the ugly” was a(n accurate, and sincere) description of a marketing ploy intended to attract interest in and business to his fledgling book-selling Web site, long since faded into insignificance in the context of his many, far-larger engagements with the financial and political world around him and his gargantuan enterprise.

Future efforts to overcome Amazon’s subversion of what readers may read, and think about, and consider believing must be left to two forces having nothing to do with Jeff Bezos and very little to do with Yad Vashem, the WJC, or the interests of organized Jewry in general. The first is The Market. Does The Market care about the regulation of what they see, what they may purchase, what they may read? Yes, of course, but not that much at the end of the day. Even in its (little-known-to-be) censored state, Amazon’s offerings remain in books what they are now in so, so many other areas: irresistibly convenient. Amazon’s dominance of the book-retailing corner of its own universe will remain undented by this recent tempest in such a small teapot, after all, unless the tempest can somehow be made larger. Not much chance of that anytime soon, it would seem.

The other prong of what I will appropriate the label #Resistance for would be what I must admit is counter-conspiracy. Sayanim, as noted above, have infiltrated the command structure of Amazon Books. If these sayanim can be identified and then persuaded to honor The Founder’s original unique selling proposition, or replaced with persons who will, then eventual, gradual—covert, if you insist—remediation might be hoped for.

Either way, once again, the truth has here been driven further underground by its enemies. It is no discouragement to those of us devoted to the raising of this and other truths into the daylight and the casting down of the lies and deception that have previously obscured it. It is, rather, a stirring call to action—a call reminding us of the ever-present need to redouble our efforts, our ingenuity, our courage, and our devotion to the cause.

Forget about Jeff Bezos. He’s now a decoy. For him, books were long, long ago, and no mystery that.