Catholic Bishop Richard Williamson, 72, was convicted of “incitement” after an interview he gave to the Swedish television program Uppdrag granskning in 2008 was broadcast on a German TV station. Holocaust denial is illegal in Germany.

Williamson was appealing an earlier conviction in 2010. At that time it was reported that prosecutors had asked for a fine of £5,400, but that number was lowered to £1,500 after it was judged Bishop Williamson has no income. 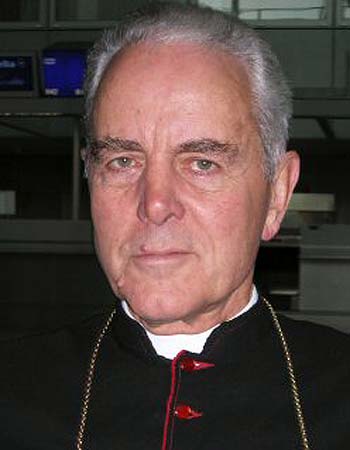 "Germany has paid out billions and billions of Deutschmarks and now Euros because the Germans have a guilt complex about their having gassed six million Jews, but I don't think six million Jews were gassed."

The court found his comments on the Holocaust were "not spontaneous but were well-thought-out answers to the questions posed in front of the camera."

Lawyers for Bishop Williamson argued that Holocaust denial is not unlawful in the UK or in Sweden, and he should not have been held responsible if the broadcast was accessible by Germans in Germany.

A few months after the 2008 comments were made public, the Vatican made a controversial decision to reverse the excommunication of Bishop Williamson, who is a member of the Society of St Pius X.