Open Letter from a Young Frenchman to a Former French Resistance Fighter
by Jeune Français
Published: 1994-07-01

First of all, I hope you were not one of those who waited until every German had fled before putting on the insignia of the French Forces of the Interior [the resistance movement]. If you really fought the Germans I respect you because I oppose all occupation forces. I can well imagine how those grey-green uniforms, that accent from beyond the Rhine, and those virile marching songs would have been intolerable to you. You may well even tell me that you despise the music of Wagner, that you hate sauerkraut and everything about German culture. You did what you felt you had to do to resist the imposition of an alien presence and an alien culture. 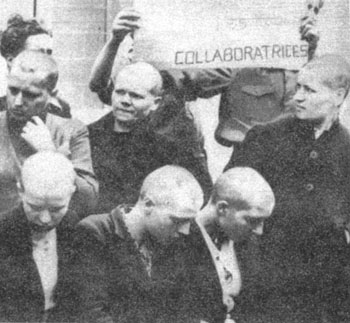 Because their lovers had been Germans, these young French woman were publicly humiliated by having their heads shaved.

But you, who resisted the other because he was German, who refused the "enrichment" of Teutonic ideas, who fought and suffered so that France would remain French, tell me this: How can you accept the waves of Africans and Asians now washing up on our shores? They leave their spray-paint spoor on our walls and on our trains and buses. Where they have become the majority, their habits make life intolerable for Frenchmen – Frenchmen who watch their neighborhoods decay and then flee.

With the help of their collaborators in the government and the media, these newcomers are trying to impose their culture on us. Today we see mosques rising everywhere, and instead of the German music of your era, we hear such tropical brayings as rap, the Lambada, and Saga Africa. You – who shaved the heads of French women who succumbed to the charms of German soldiers – what do you think today when you see white women walking hand and hand with blacks and Arabs?

Every day you are harangued by radio and television about the joys of racial mixing. You hear the government-sponsored calls to childless French couples to adopt third-world children. And all the while, your taxes rise because you must pay your part of a 240 billion [French Francs] social welfare budget that is really the annual cost of occupation.

You risked your life to rid France of German culture, but I ask you candidly: Was it worth the trouble? What have we gained, now that those field-grey uniforms have been replaced with saris, djellabahs [the costume of Morocco] and boubous [traditional African costume]?

You were lucky in a way. If today's "anti-racist" laws had been in effect in July 1940, you could have been indicted and imprisoned for "inciting hatred against Germans" with the very first tract you handed out.

What Was the Point?

What was the point of killing so many people only to get where we are now? It could all have been avoided. Around 1942, François Mitterand [former resistance leader, now President of France] could have said "The Germans are at home in our homes" [a phrase widely promoted today about immigrants], and Pierre Laval [vice-premier of France's wartime pro-German Vichy government, and executed in 1945] would have agreed. If you and Mitterand hadn't been so intolerant and Germanophobic, we could have easily assimilated the million or so Germans who were camping on our soil.

Couldn't they have been naturalized, given the vote, and made into good little Frenchmen like you and me? Wouldn't that have been an earlier version of the "cultural enrichment," "tolerance," and "openness to others," about which we hear so much these days? You may not like to admit it, but I know you prefer Bavarian polkas to that execrable rap "music."

At your age perhaps we cannot expect to find you at our side in the fight against this generation's occupation. But surely you will not be displeased to see the rising power of the anti-immigration movement and of those who wish to preserve the France for which you fought. For it is we who now fight to justify your sacrifice, whose victory will ensure that the comrades you left upon the field of honor did not die in vain.

This essay is reprinted from the July 1994 issue of American Renaissance newsletter (P.O. Box 1674, Louisville, KY 40201). It originally appeared in issue No. 19 of the French periodical l'Empire Invisible.

If history were an exact science, we would be able to foretell the future of nations. We cannot, though, because the science of history always clashes with the mystery of personality. It is men, personalities, who make history.
—Heinrich von Treitschke