Bookburning in the Style of 2011

On Wednesday December 28th, Print-on-Demand publisher Lulu.com informed the staff at Inconvenient History that they had struck our two annual editions from availability. The so-called "Questionable Content team" briefly noted that our content was in violation of their membership agreement because it was "unlawful, obscene, defamatory, pornographic, indecent, lewd, harassing, threatening, harmful, invasive of privacy or publicity rights, abusive, inflammatory, or otherwise objectionable." With a bit more focus, they continued, "Lulu sells all over the world, including to France and Germany where revisionist books are illegal and anti-constitutional."

Immediately we wrote to Lulu to get additional information. Who issued a complaint about our materials? Was a formal complaint received from a representative of the French or German governments? What article in particular was found to be objectionable? Lulu did not see it fit to respond our inquiry. This leaves us only able to guess at the invisible hand behind the complaint.

The psychic intimidation employed by the complainant had its desired effect. The books are no longer available and a revenue stream was cut off, or at least temporarily interrupted.

In Ray Bradbury's prophetic science fiction novel, Fahrenheit 451, firemen are employed not to extinguish fires, but rather to burn offensive literature. The title is a reference to the temperature at which paper burns. In his novel, fire chief Captain Beatty explains the origins of the book burnings:

"It didn't come from the Government down. There was no dictum, no declaration, no censorship, to start with, no! Technology, mass exploitation, and minority pressure carried the trick, thank God."[1]

In today's global economy, once-ironclad freedoms guaranteed by the First Amendment to the Constitution of the United States prohibiting laws which abridge freedom of speech or of the press apparently carry little weight. Lulu.com, an American company headquartered in Raleigh, North Carolina, quickly sacrificed such freedoms on the altar of economic globalism. While Americans saw freedom of expression erode during the period of 'political correctness' ushered in throughout the 1990s, today's impulse not to "offend" has resulted in the censorship of thought and ideas that may be objectionable to one minority or another. Again, in the words of Captain Beatty: 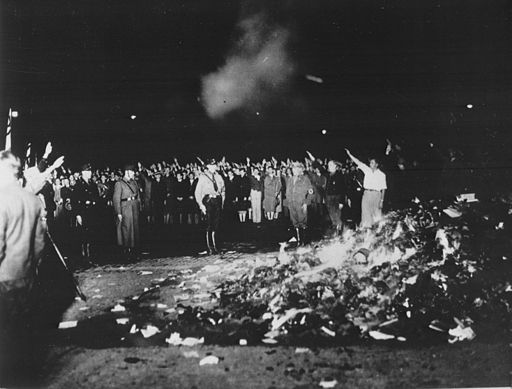 Contemporary bookburners have a long legacy preceding them of individuals and regimes who attempted to limit intellectual freedom. Here National Socialists are seen burning books deemed to be in opposition to their ideology (11 May 1933)
Bundesarchiv, Bild 102-14597 / Unknown / CC-BY-SA [CC-BY-SA-3.0-de (www.creativecommons.org/licenses/by-sa/3.0/de/deed.en)], via Wikimedia Commons

Bookburning unfortunately was not simply a fantastic idea of a science fiction author. The history of bookburning dates back at least to the third century BC when China's Qin Dynasty burned books to suppress heretical views.[3] Many people think of the medieval period in Europe when many religious texts were burned from the Talmud to Tyndale's English language New Testament to Martin Luther's German translation of the Bible. In the years when such texts were meticulously scribed by hand, such burnings were quite effective in their impact. In more recent times, the German National Socialists burned many thousands of works deemed to be in opposition to Nazi ideology.

Today, some of the books most impacted by censorship and would-be "firemen" are revisionist titles. While organizations like the American Library Association are quick to complain about public burnings of best-sellers including J.K. Rowling's Harry Potter series, they refuse to even mention the burning of revisionist titles.[4]

One example of the burning of a revisionist title occurred in early 1995. After receiving several complaints from unspecified sources, a German publisher ordered the "recycling" of John Sack's An Eye for an Eye. Sack's book recounted the story of Jewish revenge against the Germans after World War II. Citing information from Germany's Federal Archives, Sack maintained that 60,000 to 80,000 ethnic Germans were killed or otherwise perished between 1945 and 1948 in camps run by the Polish communist regime's Office of State Security.[5] The German cultural establishment launched a bitter assault. Reviewers denounced as a sensationalist, "vile docudrama" and a "gift to neo-Nazis." Soon, the book's publisher found itself deluged with complaints. Publisher Viktor Niemann ultimately ordered all 6,000 copies of the German edition to be destroyed. On February 13, 1995 he announced, "They will be recycled." [6]

"A number of the calls we have received have expressed fury that we would publish a book by 'a man like David Irving' and have questioned our moral right to do so. I can only say that Joseph Goebbels must be laughing in hell. He, after all, was the man who loved nothing better than burning books, threatening publishers, suppressing ideas and judging the merits of ideas based not on their content but by their author's racial, ethnic or political purity. That is indeed a sad irony."

Shadowy forces continued their campaign to ban the book. Initially, St. Martin's editors stood by their decision and insisted they found nothing wrong with Irving's book. The pressure increased – now including death threats. Finally, Thomas McCormack, Chief Executive Officer of St. Martin's finally gave in and reversed the company's earlier position. St. Martin's would not publish Goebbels: Mastermind of the Third Reich.[7]

One of the last books written by revisionist pioneer James J. Martin was An American Adventure in Bookburning in the Style of 1918. Here Martin, who coined the term, "inconvenient history" recounted how in late August 1918 President Woodrow Wilson's Secretary of War Newton Diehl Baker issued a directive ordering the removal from U.S. Army camp libraries of 31 publications that had been classified as "undesirable."[8] Included in this slender volume is Martin's article, "A Beginner's Manual for Apprentice Book Burners." Martin's satirical manual is a bibliographic record of works with unorthodox or unpopular viewpoints. He introduces for example a list of World War Two revisionist titles as follows:

"On the world events of 1933-47 your opinions were probably frozen into their current shape by the accounts of the virgin purity of the intentions and actions of the winners and the necessity and wisdom of everything done by them."[9]

Today our bookburning is not in the style of 1918. It is not in the style of the twentieth century or earlier times at all. The technological advances of the 21st century have enriched our lives with almost unlimited possibilities. While the speed-of-light exchange of information may be used to topple totalitarian regimes and be used effectively to bring new light and freedoms to countries and nations that have only known the darkness of censorship and dictatorship, it has also empowered those who seek to silence all dissent and limit intellectual freedom and debate.

Today it is clear that Bradbury was correct that official government censorship is not needed to burn books. Technology and minority pressure will do the trick. Bradbury was wrong after all about the need for firemen. Bookburning will occur without smoke or fire at all. It will be done by removing content from the Internet. It will be done before the actual book is printed. It will be done without even a cry or a whimper from the so-called defenders of free speech.

For the books that are burned will only be those that are objectionable—or shall I say, inconvenient.

As a result of the apprentice bookburners and their efforts to burn two annual editions of Inconvenient History, we have decided to dedicate this Spring issue to the topic of Freedom of Speech. Make no mistake, those who side with the censors and the bookburners stand against intellectual freedom and liberty. Regardless of their motives, they are no different than the most repressive regimes and individuals in history who believe that they know better than you. As such, we have several important contributions. First, we are proud to present Germar Rudolf's "Resistance Is Obligation" a gripping account of his persecution for refusing to recant his scientific convictions. Dan McGowan recounts the story of his personal run-in with defamation on an American college campus. Jett Rucker describes one possible outcome of what he calls "reputational terrorism." We are also pleased to present Rich Siegel's timely commentary on the Palestinians as anything but an "invented" people. Thomas Dalton provides an interesting first-person look at the Treblinka concentration camp as it stands today in his "Postcard from Treblinka." Klaus Schwensen returns this issue with a detailed consideration of early revisionist Stephen F. Pinter. Finally Ezra MacVie is back with a fascinating look at Gilad Atzmon's The Wandering Who: A Study of Jewish Identity Politics.

If you stand with us against the apprentice bookburners, please support our work.