Boy, Is It HARD to Boycott Amazon

They’re everywhere—probably even in the camera and microphone of the laptop on your kitchen table (yes, it has both, even if you didn’t know it). Oh, wait! That would be the NSA, or the FBI, or … yes, Amazon. They’re all the same thing these days, you know. 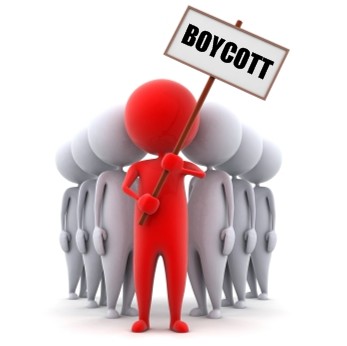 But never mind spying. Everyone is doing that, on everyone else. If you haven’t been caught yet (you know what you’ve been doing, or maybe even just thinking), it’s just because you’re small fry, or politically unimportant.  Me, I’ve been trying to boycott Amazon since they took down all the books written by folks who chose to look at the history of the Holocaust through other than Zionist lenses.

How to Boycott Amazon

Use Amazon liberally, yes, in order to find what the world has to offer, and to decide what's the best deal. Amazon puts it all in one big store and allows us to know what is available – except when it comes to revisionist books. Yet still, use it to make a decision what to buy. But once you have made that decision, take the name of your object of desire and leave that evil online store. Go to Google or any other search engine instead and search the entire net for who offers your desired product.

We should feel guilty each time we go to a mom-and-pop shop around the corner to get expert advice on what is a good buying decision, but then leave that shop and buy that item online for a better price.

Let's turn that table! Let's use Amazon's market to get advice, then turn our backs on them and buy it elsewhere. Anywhere.

Monopolies are lethal to a society. They need to be resisted. Every chance you get!

It takes me back to my other boycotts. Yes, my boycotts. I don’t boycott companies or countries because other people are boycotting them. I boycott them—yes, I, all by myself—because I (are you getting my autocentric orientation, finally?) wish to punish, or disfavor, them for what they have done. First I can remember goes back to 1979, when I swore off Stolichnaya vodka because the Soviet Union had invaded and occupied Afghanistan (good luck with that, I can say in retrospect). Later, after I had chosen Tsing Tao beer from China as my favorite, came Tiananmen Square, in 1989. Well, that was the end of that, for a while. I guess the matter cleared itself up. Imagine trying to boycott China now. Yes, it could be done, at least relatively. And relatively counts, as I shall try to persuade you.

Now, there’s this. Amazon has delisted Germar Rudolf, Wilhelm Stäglich, Walter Sanning, Arthur Butz, Carlo Mattogno, John Ball, Robert Faurisson and a host of other truth-seekers who have, at great risk to their reputations and even lives, published their findings disproving the now-for-decades-dominant account of that thing between the Nazis and the Jews that the latter have chosen (in the quiescence of the former) to label the Holocaust. Their work, so far as the Largest Bookstore on Planet Earth is concerned, never existed. You can’t order it, you can’t see it, you can’t detect that it ever existed. You can’t even detect that it all was once On Amazon.

That’s exactly how someone wants it.

Never mind who, or how. The question is, what to do about it. As opponents of the new President Donald Trump might say, Resist! Well, the boycott comes to mind as the most-readily-to-hand, legal, though-passive angle of attack.

Boycott Amazon? That’s about the same as boycotting China (something that also could be done, but perhaps with even greater difficulty than boycotting that jungle-clad river whose basin is larger than the entire United States). But let’s try. Yes, try. Does trying even count? Do you get an “A” for effort? Actually, yes, you do. Or you might get a “B,” or even a “C,” but you’d still pass. Or not pass, for all your effort. Maybe you’d end up with Rudolf, Butz, Faurisson, Mattogno and that lot, for all your effort. How would you feel about that?

When the serpent descended from the Tree of Knowledge, he offered Eve the fruit of the tree. She, wanting to know, took it, and if I believed this stuff, I’d say “brava” to her (that’s how Italians say that to a lady). But the serpent reaching down to us from the Amazon tree is hanging from the Tree of Convenience. Now there’s a tempting fruit: Convenience. I say, if you never taste of the fruit of convenience, you are either dead or you are a hermit living in a cave atop a mountain.

This is not a matter of Absolute Purity—this is a matter of abstaining from Convenience when it is reasonable and possible to do so. We all partake—must partake? It doesn’t matter—of Convenience if, when, and as we can. But we each of us can also employ discernment, taste, even moral rectitude, in deciding of what convenience to partake, when, why and how.

There are many alternatives to Amazon, both for books and for the many non-book items I often find myself shopping for online. For non-book items, eBay comes to mind. Perhaps we may all ultimately revert to eBay for everything, even books, if they can stay immune to the Zionist virus currently infusing the circulatory system of our society. Or something—anything—else. Else is the point. Google Shopping, the manufacturers’ own e-commerce sites, anything.

Amazon is convenience. Don’t let your (totally rational) penchant for convenience trample your knowledge not only of the historical particulars of the Holocaust, but your devotion to the truth, and your opposition to those who would covertly, and forcibly, keep us all from discovering it.

Try. Try as much as you can, or will. And after you have done so, go ahead. Deal with the devil, if you feel you must. You will rise to fight again. And again.

We all deal with devils. We all have to. They couldn’t be devils if that weren’t so.

But we can resist, too. This time, (not) that time, but the next time.

It counts. Every time.