The Private Life of a Holocaust Revisionist
by Bradley R. Smith
Published: 2002-08-01 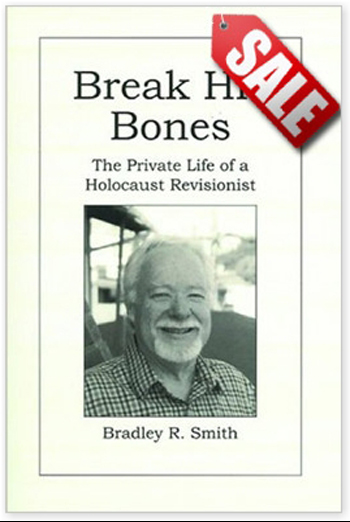 If you are curious about how it is to try to convince intellectuals that it is better to encourage intellectual freedom than it is to discourage it, I offer you the true story of a Holocaust revisionist.

It’s a truism. Things are different since 11 September 2001. Of course, things are always different, which is why the open-minded find life so mysterious. The mystery goes beyond mere unpredictability. We don’t know how we come into the world, never learn what we are or what happens when we’re finished. It’s been noted by an English sage that, as a matter of fact, we do not come into the world at all, that we come from the world. I am beguiled by the implications of this observation. What it implies lifts up my heart, but this too is mysterious.

After radical Islamists expressed their displeasure with American foreign policy at the World Trade Center and the Pentagon it was suggested by some that, having experienced our own holocaust, we would never talk about the Jewish Holocaust the way we had talked about it before. On the one hand that would be a mitzvah for those of us who do not personally represent the Holocaust Industry, or profit from it, and in any event do not want to hear about it any longer. On the other, I have lived with the story for so long that at first I was uncertain what I might do without it.

I’ve spent my golden years trying to convince the professors and our other cultural elites that they should encourage, rather than discourage, intellectual freedom and open debate, even with regard to the Holocaust question. I have failed—so far. If I had been successful it might have become widely known, even in the U.S. Congress, that many of the core elements of the Holocaust story are schlock, and that the story should not be used by the Congress to morally legitimate, and fund, Jewish greed for Palestinian land. It appears that some Islamic radicals have come to the same conclusion.

The barbarity of Israelis and Palestinians toward each other is demonstrated again and again on national television. But the U.S. Congress has not given the Palestinians a couple hundred billion dollars to fund the humiliation and brutalization of Israeli Jews. It has given Israeli Jews, however, a couple hundred billion to fund the brutalization and humiliation of Palestinian Arabs. Why? Because of the “Holocaust” story, significant parts of which are nonsense tales. It is clear to me that what the Palestinians do are not my responsibility in the same way, or to the same degree, as are the actions of the U.S. Congress and the Israeli State.

The issues of intellectual freedom and a free press with regard to the Holocaust story and American-Israeli relations remain today what they were before 9/11. American-Israeli relations and the Holocaust story are two sides of the same tabooed coin. A handful of radical Islamic killers have managed to flip the taboo on its back, like a child flipping a penny. The struggle against intellectual taboo in this century remains what was in the last. Those who rule, and those who inform those who rule how to rule, are not going to change their spots. It’s up to the rest of us.

Would you like to own the hard copy edition of Break His Bones?
This is the moment.
I’ll send it to you FREE (FREE!).
Perfect binding. 320 pages. Pay postage only – $4
Get it here: Nine Banded Books