British Publisher Simon Sheppard Arrested, His House Searched, His Computers Seized, but He Beats the Rap

This past June the Adelaide Institute reported that British revisionist publisher Simon Sheppard, of North Yorkshire, was woken up by police threatening to break down the door of his house unless he opened it immediately. They refused to allow him to put on some clothes first.

Once inside they arrested him on “suspicion of distributing racially inflammatory material, under section 19 of the Public Order Act 1986”, allowed him to dress, handcuffed him and took him away. Soon afterwards a search team arrived on the premises, confiscating two computers and some books.

“… it seems that some sourpuss at the Post Office opened an outgoing package, saw something about Anne Frank, deemed it ‘anti-Semitic’ and reported it to the police. This was enough for the special ‘anti-racist’ task force to spring into action.

“Sheppard was detained until 1 pm, then bailed for three months, during which time he may or may not be charged with having committed an as yet unspecified act.”

Sheppard’s activity as a revisionist publisher is well known to the authorities: in 2008 he was tried and convicted for distribution of “racist” tracts and imprisoned for three years. But he has no intention of giving up his life’s work because the arbitrary ruling power disapproves of it. 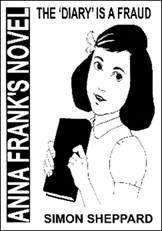 Today the offence of “distributing racially inflammatory material” carries a sentence of up to seven years. http://tinyurl.com/k2eb75v

Sheppard writes that he reported to the York Police Station on 9 September to answer bail following the police raid of three months earlier. A Post Office employee had opened an outgoing package and seen something inside, probably a copy of Anna Frank’s Novel, and this was used as a pretext for a report to the police. That report was used as a pretext for his arrest, which was the legal pretext for the search of his flat and the seizure of papers and data. But at York he was informed that there will be “no further action” in relation to the suspected offence, “the distribution of racially inflammatory material.” His two computers, drives and other seized material are to be returned.

You will find an intro to Anna Frank’s Novel and to Simon Sheppard’s Heretical Press here: http://tinyurl.com/kj4jy4n. When Simon claims he is publishing “Heretical” books and papers, he is not practicing a form of British understatement. He means – Heretical!