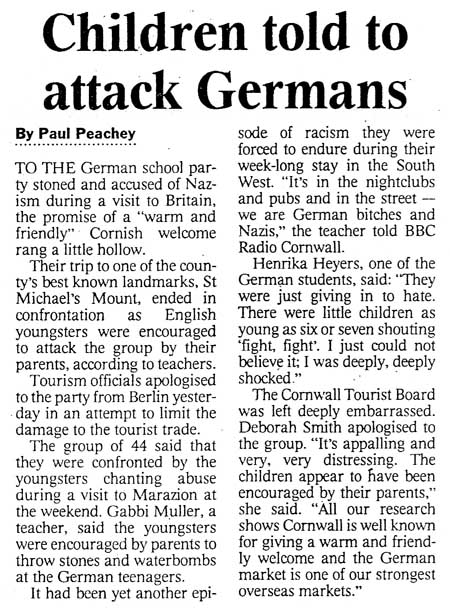 TO THE German school party stoned and accused of Nazism during a visit to Britain, the promise of a "warm and friendly" Cornish welcome rang a little hollow.

Their trip to one of the county's best knovm landmarks, St Michael's Mount, ended in confrontation as English youngsters were encouraged to attack the group by their parents, according to teachers.

Tourism officials apologised to the party from Berlin yesterday in an attempt to limit the damage to the tourist trade.

The group of 44 said that they were confronted by the youngsters chanting abuse during a visit to Marazion at the weekend. Gabbi Muller, a teacher, said the youngsters were encouraged by parents to throw stones and water bombs at the German teenagers. It had been yet another episode of racism they were forced to endure during their week-long stay in the South West. "It's in the nightclubs and pubs and in the street we are German bitches and Nazis," the teacher told BBC Radio Cornwall.

Henrika Heyers, one of the German students, said: "They were just giving in to hate. There were little children as young as six or seven shouting 'fight, fight'. I just could not believe it; I was deeply, deeply shocked."

The Cornwall Tourist Board was left deeply embarrassed. Deborah Smith apologised to the group. "It's appalling and very, very distressing. The children appear to have been encouraged by their parents," she said. "All our research shows Cornwall is well known for giving a warm and friendly welcome and the German market is one of our strongest overseas markets."

Hatred against Germans erupted recently in Britain when a group of children, encouraged by their parents, attacked visiting German students with stones and waterbombs. The incident in eastern Cornwall was reported in this item, reproduced here in facsimile, from The Times (London), June 7, 2000. Such mindless bigotry is, of course, an entirely predictable consequence of the seemingly endless worldwide campaign that Jewish historian Alfred Lilienthal aptly calls "Holocaustomania." The reaction, or lack of one, to this incident is instructive. Apparently none of the perpetrators was punished, or even arrested, for his or her criminal behavior. That's understandable because in this case the victims were, after all, merely Germans. A comparable incident in Britain or Germany with Jews or Africans as the victims would have merited instant worldwide publicity. Public figures and major newspapers would have responded with expressions of indignation and grave concern over another ominous outbreak of hate. The silence and inaction in this recent incident is entirely typical of the double standard that prevails these days throughout the "Western" world.

"People are more ready to believe a lie that has been repeated a thousand times than a truth heard for the very first time,"/p>